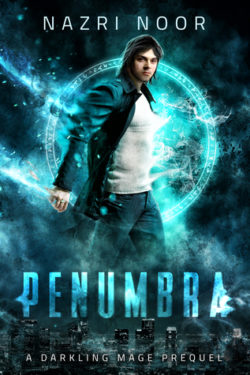 Purchase At: Free at nazrinoor.com

Dustin Graves was a jack of all trades, a directionless dreamer until the day he found his purpose: as a ritual sacrifice. Transformed in death, Dust awakens to the eldritch mysteries behind the grit and glamor of the city of Valero – and to the wellspring of dark magic that lives inside his very bones.

This is a nice beginning to what promises to be an interesting urban fantasy series with magic at its core. I know we are an LGBT site with an emphasis on gay romance, but this is not a MM romance. It is strictly UF. I love urban fantasy, I just don’t have the time to always stretch myself and when I do, I tend to review somewhere else or just read for me. This one I’m reviewing here because I really liked it.

Dustin Graves has just had a disappointing get together with his father, one that ends in another disagreement about his career choices and not living up to his father’s expectations. It upsets Dustin a great deal because his mother is dead and his father is all he has. But there’s always time to make up, right? Well, a spanner is well and truly thrown into the works when Dustin dies on his way home from his father’s. Hmm, it’s not so easy to make up with your parent when death comes calling.

Dustin becomes a ritual sacrifice when some cultists decide he may be something more than a human. Apparently times of great stress will unleash the magic within certain people, and this group tries without knowing one way or the other whether they’re right. However, in Dustin’s case, it appears they are. His body is picked up from the morgue by what he will come to know as the Lorica – a place, a group of magic individuals who discreetly live alongside the human world, looking after situations like Dustin’s. They also track and find arcane pieces that people have in their possession who shouldn’t have them in the first place. And they make sure powerful magic doesn’t fall into human hands.

Dustin is clearly sceptical at first, until a few events occur that show him all is on the up and up

with this new magical world he finds himself a part of.

His ability to shadow step is definitely an eye opener and having balls of fire tossed your way, well, it’s a different workplace environment and not so big on OH&S.

“I don’t possibly see how you people think you can get away with trying to convince me that there’s something secret I’ve never known about this world, that you’ve been magicking behind the scenes. So those people who tried to kill me weren’t just mentally ill, they were cultists who wanted me dead for some unknowable reason?” I threw my hands out. “And you, you’re some kind of white wizard, like Gandalf in a pantsuit? And this place is some kind of wizard dungeon for magical people to gather and work in some kind of magic hocus-pocus corporation?”

There are clearly defined groups within the Lorica – Hounds, Hands, Eyes, Mouths, Wings, Clerics, and so forth. Dustin, at this early stage, fits into Hounds, the group who go sleuthing to find missing arcane pieces. Although he seems to be able to transport himself using shadows, stepping – scarily so as he gets used to it – it appears he could fit into Wings, the group who teleport or fly.

Dustin seems to be unique, maybe not too classifiable, something I’m sure will be explored deeply as the series progresses. But for now we get what we need on Dustin, the Lorica, and a few people in the organisation.  Prudence and Bastion are assigned to watch a rookie Dustin during his first case as a Hound. There’s also Herald, an archivist, and Berta, a Cleric – in this world Clerics are healers. Thea is in charge of the office he now finds himself working for, probably more, but we’ll wait and see. And hey, Dustin’s dad, death has given your son an interesting vocation.

The world building in Penumbra was pretty damn good. I’m impressed. The characters will benefit from further development but that’s the point of an introductory novella to a new series. Still, I have a very good sense of who these people are… for now. The humour was good, apt for the primary age group – New Adult – but any reader of any age can read this novella and enjoy it. I am way past the New Adult demographic and I enjoyed it immensely.

I looked around – nowhere to go, nowhere to hide – and cursed, knowing that I was seconds away from having my skull and my brains completely exploded. Hah. Joke’s on them, I thought. The cleaning bill was going to be atrocious.

If you like urban fantasy and you’re looking for a new series, then Penumbra is definitely worth grabbing. It’s interesting, well written, well edited, and has enough of a hook to have me looking forward to Shadow Magic, Darkling Mage #1 – due out June 6th. Penumbra is also free, so pop over to nazrinoor.com and grab yourself a copy. 4 Stars!

This looks like the beginning of a good series. Sometimes I enjoy urban fantasy but my luck with those types of books isn’t usually that great because of the lack of good world building. I usually abandon them before the series ever really get started. I think I’d really enjoy Penumbra. Great review.

Very enjoyable start to a new series which promises a lot. Romance UF can sometimes lack the world building, but it depends on the author, this is non-romance so there’s word and page count left to world-build 🙂