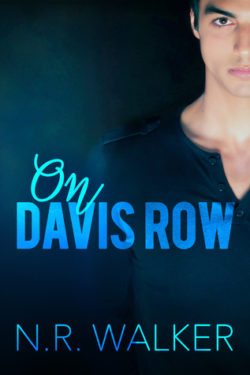 Nearing the end of a suspended jail sentence should unlock a brighter future for CJ Davis, only the chip on his shoulder is as hard to shift as his bad reputation. Born into a family of career criminals who live down Davis Road, an address the cops have dubbed Davis Row, his name alone is like a rap sheet that makes optimism impossible.

Brand-new parole officer Noah Huxley is determined to see the good in men like CJ. After all, he knows firsthand that bad things can happen to good people. His colleagues mock his doe-eyed optimism, but Noah soon sees CJ’s bad attitude and bravado are weapons he uses to keep people at a distance.

Both men know one simple mistake can change a life forever. At first glance, they might seem to be polar opposites. Yet underneath, they’re not that different at all.

CJ Davis has grown up in a family of criminals at Ten Mile Creek, a fictional town outside Maitland in the Hunter Valley of NSW. He has a two year suspended sentence, which only gets explained in the latter part of the book, and has to attend meetings and see a Corrections/Parole Officer weekly. His father and his brothers are all in gaol, or in and out of there often. He’s been raised by Pops because his pathetic father, Dwayne, has hardly been around, and when he is, he’s a nasty drunk who physically abuses those who can’t or don’t fight back.

In the beginning of the book it’s Pops and CJ living alone in the house. They aren’t close to being financially comfortable but they make do and they live harmoniously together with a routine. CJ works at Mr Barese’s garage fixing cars, sweeping the floor and doing various other paid and non-paid work. He mows the Bareses’ lawn because they’re older and because, outside Pops, they’re like family.

Noah Huxley is the newbie Corrections Officer in Maitland and he has definite ideas about helping parolees stay out of the system. His fellow workers may be a bit jaded but they accept him. His first case is CJ Davis – Noah is taking over near the end of his sentence from a burnt out PO. He’s attracted to the mistrustful Clinton straight away – not so smart in his line of work but you know that’s the story going in. He’s a kind man who may wear slacks and shirts and have an education, work in a tough job, but there are things in his past that generate the desire and need to help others who, for whatever reason, have lost their path or are less fortunate.

“Anyway,” I said, changing topics. “You takin’ on all Wayne’s cases?”
He nodded. “Yeah.”
“Busy then?”
“Yeah, but I like it. I’m only new at it.”
Totally called it. “I gathered.”
He shot me a look that was part offence, part defiance. “New doesn’t mean stupid.” 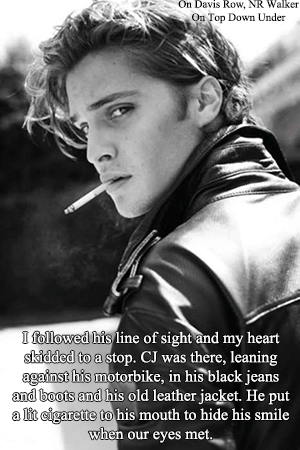 too trusting and he isn’t full of information. He’s more likely to tell Noah to fuck off or fuck you, which amuses Noah and is a kind of challenge, maybe even attracts him more. But as time passes, as Noah grows on CJ, he tells Noah to fuck off less and less.

I snarled at him, and he laughed. “What? No, ‘fuck you’ today?”
“I was saving it up for when you told me to quit smoking.”
He snorted out a laugh. “Just get in the car.”

When it becomes obvious that there is attraction on both sides, Noah puts a rule in place that they’ll not act on anything until the parole period is over. It’s only a matter of weeks. Besides, tongue in cheek, Noah suggests CJ will be begging for it eventually, which then becomes a heated standing joke between the two of them. I’m here to tell you that Noah overstepped the professional mark and would have been in trouble no matter the waiting for sex rule – just sayin’ – so I wish he’d gone for it. But that’s not who Noah is and CJ took his lead from him.

There are plenty of reviews of this book on Goodreads and probably Amazon so I’ll just add a few thoughts about what did and didn’t work.

First off, I really liked the MCs. CJ was a ‘good boy’, an overused term in the book, but it’s true of his nature and character. CJ had a lot going against him but, effectively, he wanted to break the Davis cycle. I can’t tell you how much I respected CJ’s dedication to being the best person he could be. He could only work part-time but he worked hard to make sure he and Pops were able to eat, survive and have peace. He made sure that Pops had a fire so he didn’t get cold – it gets cold in winter in the Hunter Valley – he cooked for Pops, and he made sure he could watch his soaps in peace. Noah was a decent man. I like it when people aren’t so jaded by the system, granted he was only new, and I’d like to see more Noahs in DoCS and the justice system, for example. He genuinely wanted the best for his cases, especially for CJ, and saw the person CJ was, not just a last name and bad association.

It was nice seeing Aussie vernacular used, and not just the things we say but the way we say it. Also, N R Walker didn’t change spelling or terms to suit an American market, with a rare occasional word like greenhorn. It’s an Australian story with Aussie characters and lingo and flavour. The author did it justice and I totally appreciated that. Lack of authenticity and using phonetic spelling, un-Australian and OTT slang and phrases, are the main reasons I hardly read Australian authors.

The secondary characters also stood out. I liked Mr Barese. His dedication to old fashioned customer service, his utter kindness, and his outlook on life and people helped shape CJ who’d worked for him since he was fourteen.

He was one of a kind, Mr Barese. As the blackened oil sludged into the bucket, I tried to think of anyone I respected more than Del Barese. There was no one. I knew some days there wasn’t enough work for the both of us, and I only did three days a week. But he was generous and kind, and for the last nine years, I’d kept my head down and my mouth shut and did the only thing I was ever good at: fixin’ cars.

And Pops totally believed in CJ but didn’t have the financial means to help. Rather, he had a very quintessential blue-collar Aussie male fall-back of actions and a nod or an approving look and back pat, rather than sentimental words or unhelpful platitudes.

Dwayne was an absolute bastard father. He was painted pretty right for who he was – a recidivist criminal with a nasty streak a mile wide who got worse when drunk.  There are too many Dwayne’s in the world.

The chemistry was good between CJ and Noah. There was a slow burn, perhaps a bit too slow, but they were a good fit and I could feel their connection. There were some lovely and tender moments between CJ and Noah and N R Walker’s writing made the emotion palpable.

Once Dwayne returned from prison the Davis house was one of tension. CJ was waiting for something bad to happen at any given moment for any given thing. I felt uneasy and was waiting too.

I thought he might follow me in and give me a touch up for telling him what to do, but he didn’t. He never said a word. And that was kinda worse.

The writing had a good flow throughout, it was a pleasure to pick up the book and just be a part of it. Good storytelling has a habit of making me happy to turn on my Kindle and start reading. On Davis Row made me a happy reader.

I love the cover. It’s striking and lends itself to the feel of the book.

Whilst the chemistry was very real, the first and only sex scene was at an odd time – with Pops in the other bedroom at Noah’s. I’m older but I do remember not liking sex with parents (in this case a parent-like figure) in the next bedroom. In the same house. It really does the head in and kills the mood so I felt the setting and timing could have been better chosen.

There was some conflicting information given. Pops signed his house over to Dwayne so he could get extra (Centrelink) benefits but a) the amount he’d get in rent assistance wouldn’t be worth the aggravation and loss of control of his home. And b) there was mention near the end that Pops was feeling better because Noah helped organise subsidised meds. Pops would have been on a Disability Support Pension already because of age and emphysema, meaning he would have immediately had subsidised medicine. And speaking of, he would have used inhalers or a nebuliser, which were never mentioned. I saw this as being a case of the whys the author came up with to assist the plot around CJ’s suspended sentence… and, hence Noah.

These are little things in the grand scheme of the book but they needled in the background.

I enjoyed this book. It had atmosphere, a great sense of place, and the characters were extremely likeable – I believe I’ll remember CJ and Noah for some time. There was good chemistry, some lovely moments, and I liked seeing a person in power making the effort to help another person who just needed some belief, as well as that person fighting for their future too. The book is a tad low on steam, which may bother some readers, but there was enough going on within the story to keep the majority invested. It stayed true to the setting. It was absolutely believably Aussie. It has an epilogue and a HEA. There’s a lot to recommend On Davis Row to contemporary gay romance readers. 4.5 Stars!

One of my biggest pet peeves with my reading is when I read a book with the characters not being true to the setting. Unless the character is from somewhere else anyway. I’m American and I get annoyed when I see American spelling and lingo in books set in other parts of the world. I’m glad this stayed true to the setting and characters. With that being said, this looks like a nice story. I don’t mind a good slow burn when the story calls for it. I loved my last N.R. Walker book and I can tell I’d really… Read more »

A massive pet peeve of mine too. If a book is set somewhere then it needs to be right – speech, slang, spelling, characters…

This was really enjoyable. I noticed you had one of the author’s books on your BOTY for 2017 so I should check that out now.

The top pic kind of suits CJ, not quite… but nearly 🙂