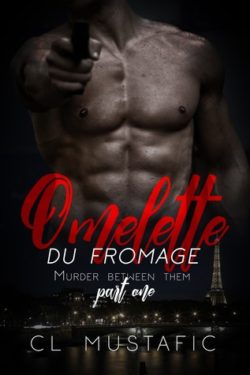 When someone steals a hit out from under Bastien Lacroix just seconds before he’s about to pull the trigger, he knows it’s got to be more than a coincidence. It’s not the first time it’s happened, but with no way to find out who’s beating him to the punch, he carries on with his post-hit ritual as if nothing is amiss. While eating his dinner in a restaurant in the beautiful city of Paris, Bastien’s joined by a mysterious man who delivers a cryptic message from a known associate of the Russian mob. When Bastien refuses to comply with the man’s demands to hand over the thing he’s been sent to retrieve, Bastien finds himself in a hand to hand battle for his life.

Warning: This book contains adult content and is intended for mature readers only. Contents contain violence, sexual situations, and questionable subject matter that might not be suitable for all audiences. Please see disclaimer inside.

Omelette du Fromage was another interesting read by C.L. Mustafic. I very much enjoyed the exceedingly dark Backdoor Politics last year. Well, enjoyed is probably a strange word choice for such a brutal book, but it was an emotional trip and one of my Books of the Year: 2017.

This is a short novella, serial size, at only 23 pages, but it’s 23 pages well written – the only reason it’s 3.5 stars is I really, really wanted more and this was just getting started. It has elements I like, including non-con/dubious consent and an ambiguity, a shadowy element to the MCs, particularly the hitman who is taking out Bastien’s – the narrator’s – marks. The tone is noir. Parts of Europe are absolutely primo for lending an edgy feel you can’t get anywhere else, and CL Mustafic knows how to use that setting in combination with her characters to good effect.

Everything stems from the ‘thing’ that Bastien seems to have in his possession that the other hitman wants. That Ranković, clearly the boss, has sent him to retrieve from Bastien. Damned if this isn’t an eye-opening way to get someone’s attention. I suppose being a hitman is a pretty dog-eat-dog enterprise. Anyway…. impressions between two shady characters are made. And sex is had. Definitely not romantic sex. 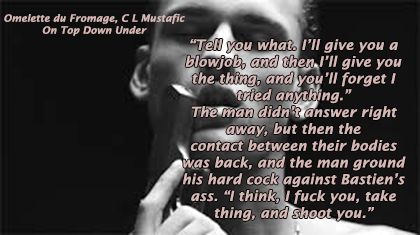 Omelette du Fromage seems to be part 1 of a serial style series. Maybe it’s the introduction to more, I don’t know. However, if you are in KU it will help if this is to be a serial. If there are 10 parts or more, and at (approximately) AU $1.33, or 0.99cents USD, then it would become expensive without KU for a lot of readers. But I don’t know the author’s plans for future books.

All I can add  to finish up, is that at the end of part 1 I definitely wanted more. I definitely want to know where this is going. Hit me up with more hitmen in the next e-book, C L Mustafic.

He knew full well he was fighting for his life at that point. No man handpicked by Ranković would leave him alive after what he’d pulled.

This looks like a nice short. I remember how much you liked Backdoor Politics. This does look to be part of a serial. If so, great for KU readers. Not so much for those not in KU. I’m eager to see what else happens. Great review. And that quote…

Yep, looking forward to the next part now and hope it continues on well.