Not a Game, Cardeno C 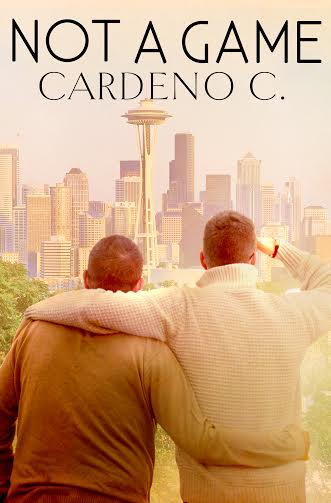 An accidental meeting and a misunderstanding lead to a life-altering connection.

A new job, a new city, and hopefully a new life. When chubby gamer Oliver Barnaby receives a job offer from the best boutique game developer in the country, he leaves his family and his less than spectacular existence in Oklahoma without a second’s hesitation. Determined to change more than his career and his geography, Oliver implements a plan to finally land a boyfriend. Step one is improving his skills in the bedroom.

A life that looks perfect on paper, but feels empty in reality. Attractive, successful, charismatic Jaime Snow has a life other people envy. His already booming business is growing. He isn’t lacking in friends. And he has no trouble finding a date. But there’s an emptiness in Jaime’s heart and a hole in his life that only the right man can fill.

An accidental meeting, a misunderstanding, and falling in love. When Oliver and Jaime end up at the same bar at the same time, they each see something they want in the other. Going to bed together that first night is easy. Building the lifetime relationship they both desperately crave will require trust, time, and a little misunderstanding. 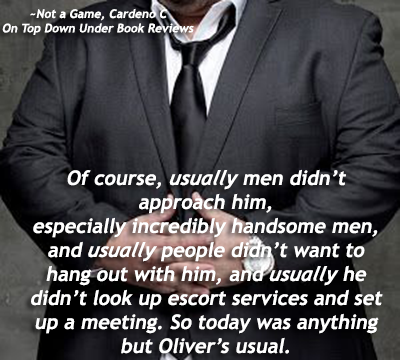 games. He likes his new job, is glad to have left Oklahoma City to be in Seattle. New job. New city. Time to change up his life. Tonight he’s meeting up with an escort to help teach him how to be better/good in bed – his ex told him he wasn’t so the larger Oliver feels it must be true. He lacks confidence and self belief. When a hot salt & pepper guy walks up to him and comments on his textbook, Coding, something which continued to be Oliver’s safety blanket through dead end jobs all the way to Seattle, he knows it has to be the guy he hired. Why would this gorgeous guy talk to him otherwise? Time for him to be game for the night ahead.

Jaime Snow is turning forty and he wrote the textbook that this guy in the bar has a hold of. He’s not an escort, but definitely not insulted that the guy thinks otherwise. So when the younger,  attractive and interesting guy thinks he is, and he is so nice with a body and charm that has Jaime completely interested, he’s not going to disabuse him of that notion. The guy, Oliver, has a room upstairs at the hotel. It will be one night so no harm, no foul. Maybe he can help this sweet guy feel better about himself after his ‘dick’ of an ex made him feel so bad, and both of them can have a hot time as well.

Oliver has goals. Moving to Seattle was one. Landing a job cutting code and creating games 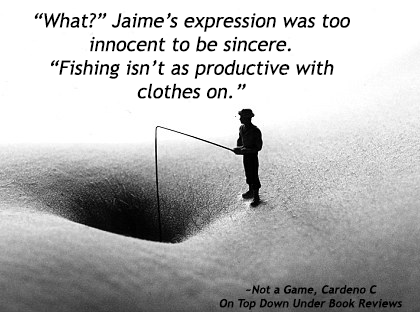 another. But he also wants to make friends in his new city. Find a partner who cares for who he is inside and out, no matter his lack of experience,  no matter his non-ripped, non-gym body; but being a gay guy doesn’t make the latter goal an easy one when there are often lofty physical expectations.

One time with/ as an ‘escort’ turns into quite a few as Oliver and Jaime get to know one another over weekly meet-ups and sex sessions. Jaime listens, the pair talk, the normally socially awkward Oliver gradually comes out of his shell with Jaime taking a positive and gentle lead. Jaime does some quick shuffling about (so called) fees and Oliver calling him directly. Meanwhile, Jaime casually and correctly works out how to tell Oliver who he actually is and how much Oliver has come to mean to him. How, at forty, he never thought he’d actually meet someone like Oliver.

“I hope you’ll eventually see yourself the way I see you.” Jaime grazed his lips across Oliver’s jaw and down his neck. “Not that I mind the process of reminding you how I feel.”

They make a great pair – Jaime wants someone sensual, kind, smart and down to earth, Oliver is all 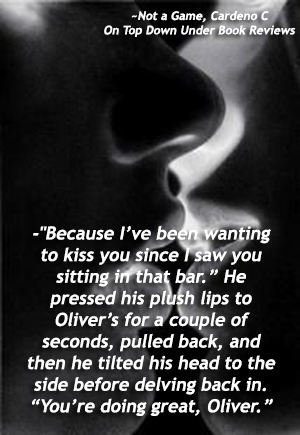 of those things. Oliver’s body, his skin, his gentle and tactile-self appeal to Jaime in every way. Oliver gives Jaime the combination of chemistry and intellectual connection, something he’s longed for. Oliver gains confidence and learns he’s so much more than he thinks he is, being with Jaime, heeding him, finding a kindred connection with an older, patient, experienced lover/ man/ partner.

“We have different builds.” Jaime curled his fingers in and out, feeling every inch of Oliver’s waist and stomach. “I happen to prefer the fullness of yours.”

Apart from Oliver and Jaime there are also some nice supporting characters. Tamra is a colleague Oliver connects with at work. She lets Oliver see how women have to go to great(er) lengths to get employed, let alone gain any support, in the IT/gaming world. Jack is Jaime’s ex and they’re still close despite Jack holding a torch for Jaime. They separated eight years ago and I like how they’ve remained friends and they’ve worked out how to continue to run a successful business together, despite personal separation. I’m hoping Jack gets a book all of his own. It seems like he will.

Ahhh, I really liked this one. This is a very sweet book. Cute and cuddly through and through. This is also a classic Cardeno C contemporary. When CC nails a contemporary romance you get highly likeable characters and a truly delightful story. That’s this book. That’s Oliver and Jaime. They are perfect for one another, their love addictive, infectious, and squoogey. Is the story full of twists or drama or action? Nope. It has a pretty predictable contemporary romance trajectory. Which is the point. However, I was pleasantly surprised how Jaime and Oliver met wasn’t used to drive drama. Yes! I was a happy, happy reader when Cardeno C did not go there. Not a Game is super sexy – really sexy. It’s also comfy and warm and snuggly, and in a world gone to crap, this is just what you need to help you escape everything for a few hours.

“Would it help if I reminded you that you’re the perfect guy for me?” Jaime asked, voice soft.

The cover is awesome and value adds to the overall tone of the story. The book is sensitively written. There is no condescension and there could have been because Oliver is a bigger guy. Without being dismissive, gaming is the (quiet) background, Oliver and Jaime’s growing love and relationship is allowed to dominate the story and, yay, I loved that. You get both POV which helps you connect effortlessly to both MCs. This is a really well written novella, one that I absolutely know will be a comfort re-read for me on numerous occasions to come. If you are a fan of Cardeno C, if you love their contemporary romance stories, or if you just love a sweet and charming romance, complete with a HEA, Not a Game is highly recommended reading and gets a well deserved 5 Stars!

Previous post
All Breakages Must Be Paid For, Morgan Starr
Next post
Christopher by Candi Kay: Excerpt and Giveaway

I wasn’t even halfway through your review before I knew it was a book I’d be reading as soon as it’s released. I adore Oliver just by what you said and I can tell I’d love Jaime as well. I’m in need of a sweet romance and I can tell Not A Game will be perfect.

It really is the perfect comfort, sweet, escapist, romance read. Lovely MCs. I do love a good MC. One of Cardeno C’s best books. There are a couple up there for me, but this one is one of the best they’ve written, in my opinion.

Definitely grab a copy to read when it comes out, Cindi.

Don’t we need some escapism from this angry world and a book like this one will take us away. So excited to get my hands on this when it releases I didn’t even know this was coming out so thanks for the pre review.

Wanted to add that my man is a bigger man and I love having something more to hold onto. 😀

I have a very close friend who is lean and goes to the gym, works out, and he loves bigger guys. Guys who are not “gym rats” (his words.) I think what you said might be true for him too, “something more to hold onto” 🙂

I hope you buy the book and really enjoy it, Wendy 🙂

You can always count on a great story from Cardeno C. This one looks fantastic. I love your review. I can’t wait for release day!

I like a lot of Cardeno C’s books but this is one of the best, in my opinion 🙂

Thanks re: my review, Bindi 🙂

I luv Cardeno C. This looks like a really good book.

There are a few Cardeno C reviews on this blog so it seems I like their writing too, Mishca 🙂 Not a Game is really good. Hope you enjoy!