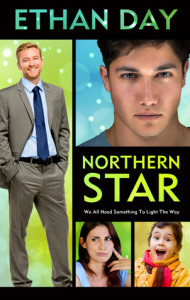 Deacon Miller has just been dumped via email. He is stuck in Michigan after having a nightmare visit with his alcoholic mother and being forced to leave his teenage sister behind. His flight back to Chicago has been cancelled due to bad weather. Feeling sorry for himself, he goes to the bar connected to his hotel and decides to drink his sorrows away.

Steven Steele spent most of his life living a lie. He lived as a straight man, even marrying, until he could no longer live that way anymore. He is consumed with guilt over the pain he caused his wife and her little girl. On the anniversary of his coming out to his wife, he shows up at the same bar where Deacon is trying to drink himself into oblivion. A drink or two later and the two end up going back to Deacon’s hotel room and spend the night exploring each other, each never expecting to see the other again. There’s a connection that neither man can deny but they live in different parts of the country and know that it’s only a one time thing. Unfortunately, the next day Deacon receives a frantic call from his little sister and is forced to deal with the family issues that he had tried so desperately to leave behind.  Deacon and Steve go their separate ways doubting they will ever lay eyes on each other again.

A few months later, fate brings the two men together again. Deacon has been forced to return to Michigan to care for his sister while his mother is forced to deal with her own issues. The connection from months earlier has never gone away for Deacon and Steve and in no time they are spending time with each other, in and out of the bedroom. But Deacon has problems that have carried over from his childhood and Steve is still dealing with the guilt of what he did to his wife and her little girl.

I don’t want to go into a long summary of Northern Star. I could never find the words really to describe all the emotions that the author puts out there for these characters. Deacon will break your heart. He has been beaten down verbally so much by his mother and others that he is convinced that he’s not worthy of anyone, much less someone who is larger than life like Steve. My heart ached for him as no matter what Steve did to convince him otherwise, the doubt and insecurities remained. He’s the type of character that makes the reader want to reach into the book and give him a huge hug and try to take the pain away. Steve puts on a good act for those around him but he’s constantly dealing with the guilt of destroying everything with his ex and hurting the relationship that he had with her little girl, a little girl who Steve loves dearly. Both men must fight like hell to come to terms with their issues so that they can finally be the couple that they need to be.

There is an amazing cast of secondary characters. There’s Clarissa, the ex wife, and her daughter, Kylie. There always seems to be a bitchy female in the M/M books I read so it was a pleasure to see Clarissa written differently. There’s Ashley, Deacon’s sixteen-year old sister, who loves her mother, Patty, but is aware that the woman is capable of destroying her life just as she has Deacon’s. Thankfully Deacon (and later Steve) do their damndest to make sure that doesn’t happen. Ashley is written as the perfect, typical teenager.   There is a bad guy who goes beyond being just a mean person. Then there is Patty, Deacon and Ashley’s mother. Patty is a character that the reader will hate instantly and this will not change as the story plays out. The sad thing is that there are real people like Patty all over the place. As a mother, I could never imagine someone treating their child (grown or otherwise) the way that Patty treated Deacon. It’s no wonder that he grew up feeling himself not worthy of any type of love and constantly waiting for the other shoe to drop.  Steve’s coworkers and friends also added (in a fun way) to the story.

While the book is quite serious and focuses on serious issues, there is a lot of the humor that one would expect from Ethan Day. I found myself grinning one minute and wanting to cry the next. The emotional scenes had me teary quite a bit as it hurt to see what Deacon was forced to go through as a result of his horrible upbringing.

There is a seventeen-year age difference between Deacon (who is 27) and Steve (who is 44).  I am a huge fan of books with characters with a huge age difference so I really loved that.

Deacon and Steve must work through a lot to get where they need to be but when they do, it’s beautiful.

Overall, an outstanding book. The reader is allowed to feel the emotions of all of the characters instead of simply being told what they are feeling. Not many authors can pull that off but Ethan Day does it brilliantly. The title is perfect and the reader will see why later in the book.  The sex, as always from this author, is hot. Highly recommended.

Wonderful review, Cindi. This is such a Cindi book and obviously so well written that you could really get into it and enjoy the heck out of it. 🙂

Thanks! I really enjoyed it. It was definitely a Cindi book. I laughed. I cried. I ended it so pleased with how everything came together at the end. Seriously an outstanding book.

I just bought this one after reading your wonderful review. 🙂

Awesome! I don’t think you’ll be disappointed. I totally loved it. 🙂