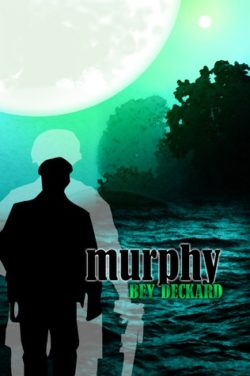 Sometimes when it seems like it’s too late, the right person comes along and opens your eyes…

Murphy is the continuing story of a D/s relationship between two Space Marines who found each other in the midst of hopelessness and misfortune.

Sarge and his newly minted squad travel across the galaxy on a top-secret mission that could help win the war. However, to Murphy something about the mission stinks, and it’s not just the planet they’ve landed on.

Murphy takes up not long after the finish of Sarge. Both men have been promoted post conflict that saw Sarge nursing Murphy, who had lost his leg, while backup came along to save his tough, loyal marine. Sarge has been assigned his own team now, and bionics and the privatisation of the armed services are such that Murphy has a new leg. The show must go on, and Murphy lives to fight another day. He and Sarge are off to a waterlogged planet under a blow-in commissioned officer they know nothing about. No one’s talking about the specifics of the mission which seems pretty suspicious. 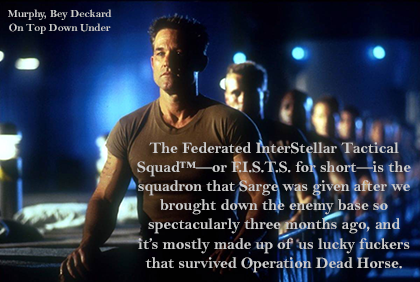 This backed up book #1 really well. It added to the overall connection that was building between the men. Sarge hasn’t thought too much about how he’s come to really care for Murphy, but the reader knows and it’s nice to see him twig and give it some thought. It’s become more than just two soldiers scratching an itch, being available and enjoying a mutual clicking of a kink. Murphy is definitely his boy, but what if he’s too old for Murphy? Too harsh?

“Son… Do I…” He looks like he’s struggling with the words, and his voice goes rough. “Do I make you happy?”
I blink, startled. I want to laugh, but Sarge might take that the wrong way.
“Y’sir.” When I try to pull his hand back to my mouth, he stops me. “I’m serious.”
“So’m I,” I rumble. Happy? Hell, I’ve never been happier or felt more at peace than the months I’ve spent at Sarge’s side.

Meanwhile, the guys have to sort out what’s what on this mission and get out alive, no more Operation Dead Horse. No more eyes being blown out, no loss of limbs, and especially no loss of life. Murphy’s synaesthesia mojo with people and their auras is still going strong and helps him work out who can and (maybe) can’t be trusted.

That was way too fucking easy… I glance up and notice that Ollie’s watching me. The smile on his face is friendly, but the colours around him are suspicion and determination. I smooth the frown off my face and make my expression bland.

I enjoyed Murphy as much as I enjoyed Sarge. I think where there was a revelation about these two men finding one another in war – kind of a needle in a haystack – and just how well they fit in Sarge, it’s enhanced further in Murphy. The fact that Sarge consciously becomes aware of just how important Murphy has become to him, how important they are together, is the guiding light in this novella. The hopeful dedication states –  ‘for those that think it’s too late’ and those few words perfectly set the tone for the series. 4.5 Stars!

This looks every bit as good as the first one and I can tell you enjoyed it just as much. I’m so eager to learn more about these guys. I love your review and I (as always) love the visuals. 🙂

I definitely enjoyed both of these novellas, Cindi 🙂

The visuals are not as in your face as Sarge, lol