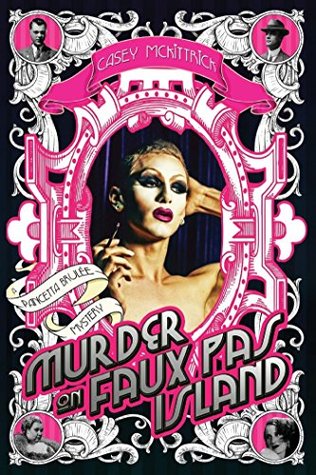 The year is 1935 but this is an America where cross-dressing goes almost unremarked, often unnoticed, and gay relationships are mundane; gay marriage, a quotidian fact of life. Famed chef and female impersonator Pancetta Brulee of New Orleans has been hired to cater a gay engagement party for two prominent grooms at the infamous Faux Pas Island and the Robicheaux estate. Both family and island have a terrible past, and most Cajuns and Creoles avoid the place like the plague. Pancetta attends the weekend engagement party, only to be faced with the gory murder. The family enlists her and her gorgeous yet restless ex, who happens to be on the island as a groundskeeper. The two embark on a strenuous search for the truth of a tragic Saturday night. Among the suspects are a disillusioned fiancé, a Hollywood starlet sister-in-law, an old family friend and admirer of the deceased, a godmother and Countess of Romania, a disapproving mother and father, and a spurned lover of the dead man who has long been a rival for his father’s affections. Murder on Faux Pas Island unfolds as a yarn with campy humor and a hint of romance.

It’s not often a book blows me away. Murder on Faux Pas Island did. I was at 71% when I was forced to put my Kindle away for the night. When I went to bed, I was still thinking about the book and wondering who the killer was. I couldn’t wait to get back to it this morning. I was not disappointed.

As the blurb states, the story takes place in 1935, but we’re not talking about the 1935 we all know. In Murder on Faux Pas Island, it’s a 1935 where cross-dressing and homosexuality aren’t really even a blip on anyone’s radar; meaning that it’s really no big deal to anyone one way or another. It’s as part of society as heterosexuality and nobody thinks anything of it. Wouldn’t it be nice if it was really that way?

With that being said, we are introduced to cross-dresser Pancetta Bruleé. Pancetta has her reasons for wearing women’s clothing, but she’s also very confident in her male identity, Chet. They are the same person, yet not. They are both just  part of who the person is as a whole.

Pancetta Bruleé was the creation of thirty-year-old Chet Burns. She had started as a Friday night diversion, a persona to be pampered, dolled up, and taken out to the speakeasies for Female Impersonators Night. Yet, as time went on, Chet realized his frequent longing for the sexy, powerful feeling Pancetta called forth; Fridays couldn’t come fast enough. After awhile, he decided to spend his weekdays as Pancetta.

Ten years later, Pancetta hadn’t looked back. On weekends, she would leave the women’s apparel at home, don a leather jacket, and go out cruising man-to-man. 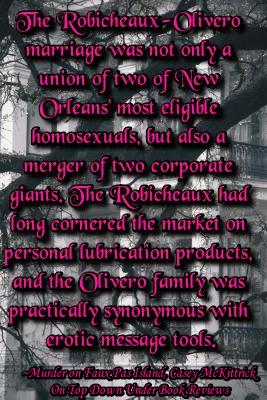 Pancetta met Oz and Raymond a few months before the story begins and they all became fast friends. After being wowed by Pancetta’s cooking, she was asked to cater their lavish engagement party that would be held at the estate of Oz’s family plantation on Faux Pas Island. Faux Pas Island is in the middle of the swamps of Louisiana and it’s not frequented by many outside of the family. Not only does it have a very shady history, but it can only be accessed by water and who knows what’s under the surface? As a native of Alabama and a frequent visitor to Louisiana, I can assure you that you don’t want to know what’s in the swamps of Louisiana. 🙂 Pancetta is a caterer with her friend Madge, so of course they agree to cater the event. Unfortunately, Madge comes down with a bit of food poisoning so the weekend affair will be left to Pancetta. When she arrives at the large home, she’s surprised to discover that her one true love has also been hired to do handiwork the same weekend. Ah, Joe Bliss. The man who stole both Pancetta and Chet’s heart a few years back, only to leave what amounted to a quickie Dear John letter. It took forever for Pancetta to get over Joe, but seeing him again? Let’s just say that certain parts of anatomy stand up and take notice.

Joe Bliss is the least of Pancetta’s concerns, it turns out. The engagement weekend will be attended by the best of the best, including Romanian royalty. From in-laws who don’t like each other, to a drunken and randy uncle, to Oz and Raymond, who have an odd relationship (to say the least), Pancetta is in for an interesting and busy weekend. But then people start getting murdered and Pancetta and Joe are forced to put their differences aside to find out who is killing people on the island. 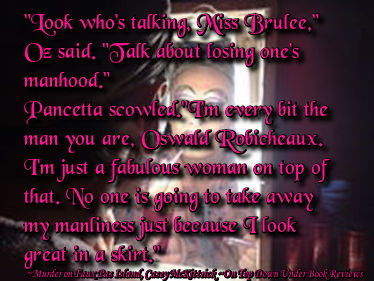 The list of suspects is pretty long. Oz isn’t exactly known for discretion when he does things behind Raymond’s back, so it could be a scorned lover who wants to hurt Oz in any way possible. Or could it be Raymond, who is possessive and has a jealous streak a mile long when it comes to his man? Or maybe it’s the Countess, who is closer to Oz than his own cold and bitter mother. But then there’s also the Hollywood couple who spend an excessive amount of time hiding away doing what they say is work for their current project. The killer could be one (or more) of any of the guests, staff, or family members. When the lady of the house enlists Pancetta and Joe to find the killer (or killers), the reader is taken on a ride that will have you rushing through the pages of the book to finally discover who the villain is.

This is a great book. I usually know early on who the killer is when I’m reading a mystery. That was definitely not the case with Murder on Faux Pas Island. Each character has their own secrets that come out little by little, but no way did I even suspect the murderer was who it turned out to be. The author does an outstanding job putting all these clues out there where you’ll be convinced you know who did it one minute only to have an “Aha!” moment later. When the killer was revealed, I had one of those moments. All the clues were right in front of me the entire time, but I was thrown off course by other clues tossed in my path along the way.

Not every character is likable, but they are all entertaining. When I sat down to read this, I thought I’d read a few pages and come back to it later. It didn’t work out that way. I honestly didn’t want to put my Kindle down even for a little while until I knew who did what. 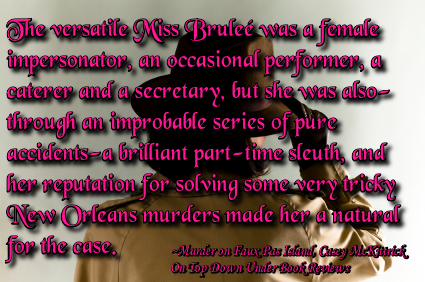 There’s a romance here, between Pancetta and Joe, but the mystery takes center. I love how the author didn’t focus solely on the couple. Don’t get me wrong, it’s there and there’s even one sexual experience thrown in, but I didn’t miss the lack of romance at all. I was so caught up in the mystery of the story. There’s another mystery that’s always lurking in the background of some of the key players from a year prior. Not only does Pancetta solve the murders of Faux Pas Island, but she also helps other things to come to light that might not have had everything not occurred during the engagement party weekend on Faux Pas Island.

Overall, this is a brilliant mystery. I hope to see more of Pancetta/Chet and Joe in the future. I would love to see where they go from here and I’m eager to see them solve another whodunit. I’m not usually a fan of non-contemporary books. Actually, I mostly shy away from them. I’m glad I didn’t turn away from this one. Had I done so, I’d have missed out on one of the best books I’ve read this year.

This book was provided by Lethe Press in exchange for a fair and honest review.

That’s going on my list Cindi, what a great review. I’m looking forward to this one. J

Thanks, Judes. I can’t recommend it enough. OUTSTANDING book.

Murder on Faux Pas Island sounds refreshing and well written. Excellent review, Cindi – and the pics/quotes are, as always, terrific.

Thanks, Kazza. It is extremely well written and very refreshing. Great book. I hope there are more books in the future with these characters. If so, I’ll be all over them. 🙂