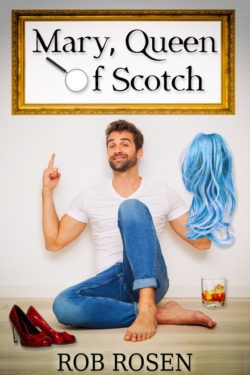 This book starts off with the eponymous Mary trapped in a whiskey barrel with no crowbar or any other necessary or useful devices to help her out, and that includes a wish for Thor. Why not? Thor is both useful and hot. She’s also thinking about her Ma, and questioning how her other persona’s questionable 5 star Yelp reviews – Barry the PI – can mean anything when in this much of a pickle. After the unusual beginning, the story shifts to how Barry actually came to be in the barrel, eventually going past that point to the solving of a case, and all roads leading to whatever a good PI, well, one with an online qualification, can hope for. It’s all done in a very tongue in cheek, humorous, and decidedly camp way.

Sixty year old Arthur Slade initially contracts Barry to follow his twenty-three year old spouse, Chad, to see if he’s cheating on him. It starts the ball rolling for the drag character Mary, Queen of Scotch to be born.  Barry takes the case, follows Chad, finds nothing that would indicate there’s anyone else. That’s it, case closed. It’s time to pay up and move on as far as Barry’s concerned, but Arthur’s not on the same page. 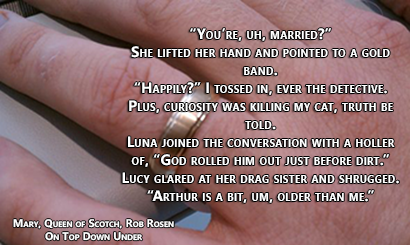 inside, complete with wigcam, to get the total tea on Chad. He’s absolutely certain there’s someone else – it’s isn’t right to have blue balls at sixty when you have a normally sexed up twenty-three year old in your bed. So Barry’s got to do what a PI’s got to do to make a living… and more Yelp reviews. He enlists the help of his loving, helpful but guilting ‘Ma’ for makeup, wig, and overall outfit, then sashays up to the bar where the bartender, Ray Charles – obviously not the original – flirts with the new ‘drag’ talent.  It’s when Barry quickly comes up with the catchy Mary, Queen of Scotch for her new drag moniker. It’s here Mary meets a troop of queens, including the delightfully named Auntie Bellum, Luna Tic, Pearl Necklace, Connie Hung and Maureen Povich.

Even though the other queens like to take a dig at Arthur and Chad’s age difference, which is clearly quite

considerable, Chad seems resolute about being in love with his husband. Mary captures Lucy on wigcam admitting to being happily married to Arthur, not even interested in a kiss let alone a whole affair. Still, even this isn’t enough for Arthur, thus begins a new career addition for our intrepid PI narrator.

It doesn’t take too long for Barry to discover his inner drag queen – the wigs, lippy and general makeup aren’t all that bad, and the tips aren’t to be sneezed at either, they’re incredibly generous. Ray even makes sure that scotch is free flowing and the songs Mary knows, Madonna being a popular choice, are played for her lip syncs. While Mary is enjoying the spotlight on stage, it’s Lucy that’s the star. Lucy is hot as Chad and gorgeous as Lucy. She has a stage presence but a sadness about her as both Lucy and Chad. What does that mean? Is Chad/Lucy unhappily married? Is there something more going on? All that glitters is not gold and Chad has a rather interesting backstory, but that still doesn’t mean he’s a cheater. However, the longer Barry is around the girls, the more it seems that there are secrets everywhere, and an uncertainty about who to trust. And all the while, Barry’s Ma laments that he didn’t stay a barista at Starbucks.

There isn’t a lot I can review about Mary, Queen of Scotch. It’s hard to say much about the plot because a) it 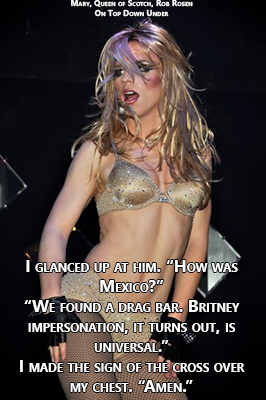 would spoil the overall story and b) it relies on humour which feeds off situations and prior jokes, none of which ever translates well in a review. You kind of have to be there.

What I can say is that there are moments of bitchy queens, a camaraderie amongst the girls as well. The further Barry gets involved the more it appears the original case is morphing. There’s an interesting transition, smooth, from the case Arthur Slade wants investigated, the one involving a potentially cheating spouse, to so much more.

Also, Barry goes from a man-drought to two guys happening at once, one being Ray Charles and one being his well endowed ex.

Rob Rosen has a lot of fun with this book. Barry/Mary is funny, cheeky, irreverent, a most unusual PI. And, to be honest, I’m a sucker for a gay son who really loves his dear (old) mum and vice versa, being fortunate to have that kind of relationship myself.

“Care to take your son blouse shopping? Again, I mean?”
“This is not what I pictured when I brought you home from the hospital, Barry.”
Again, I laughed. “Pick you up in twenty, Ma.”

Mary, Queen of Scotch has the best title, it’s clever and so much fun. Also, look at that gorgeous cover. The narrative is conversational in style and is delivered as if you’re Barry’s bestie and he’s relaying the details of his latest case to you. The writing is strong yet lighthearted – there is no animus at any stage from Barry, no matter what happens. I liked that about him. The 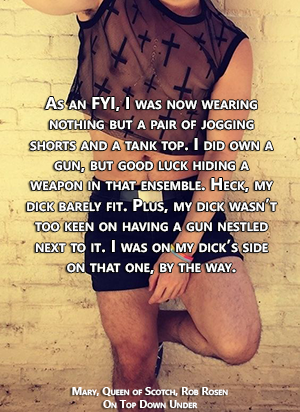 editing is tight, the characters interesting and three-dimensional, the humour, puns, drag queen snarking is on point, and there’s even a little sumthin-sumthin along the way – good for you, Barry/Mary.

Rob Rosen dons a pair of Louboutins and gallops along full pelt in this high-spirited story. He delivers quirky PI/drag queen realness with dollops of tea, shade, and a non-formulaic story that flows well and delivers much. It definitely has you wanting to know what happens in the end, and why, because the mystery is a major arc. But Ray, Barry, and Jeff were a nice distraction as well.

I really am enjoying books that take me off familiar and well worn “MM” paths, and Mary, Queen of Scotch delivers quite delightfully.

Shantay, Mary, you stay. I hope you come back soon for more adventures – and bring your Ma with you. 5 Stars!

Previous post
The Story of Us, Barbara Elsborg
Next post
Kazza: The Meaning of Slow and Why I’m Not Reviewing Your Book.

This looks so entertaining. You picked the perfect quotes and pics for them. Great review, Kazza.

Yes, it was a lot of fun and a good time was had reading it 🙂
Thanks, Cindi