Love is Heartless by Kim Fielding 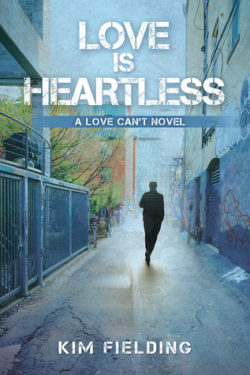 Small but mighty—that could be Detective Nevin Ng’s motto. Now a dedicated member of the Portland Police Bureau, he didn’t let a tough start in life stop him from protecting those in need. He doesn’t take crap from anyone, and he doesn’t do relationships. Until he responds to the severe beating of a senior citizen and meets the victim’s bow-tied, wealthy landlord.

Despite their differences, Colin and Nevin discover that sparks fly when they’re together. But sparks are short-lived, dampened by the advent of brutal crimes, and Colin and Nevin have seemingly little in common. The question is whether they have the heart to build something lasting.

Hmm. Okay. I’m unsure how I feel about this book overall because I liked it and I didn’t like it so I’m sleeping on it to maybe come up with what’s on my mind.

All right, slept on it. I’ll be straight to the point, if Nevin Ng was not an MC, if I had really liked or loved both MCs, this book would have been close to 5 stars. I struggled enormously with Nevin for a good portion of this book, I put it down twice in the first 30% alone because of him. I picked it back up again purely because I really liked Colin and I wanted to read more about him. Every time I felt comfortable, and like I was getting into the groove, Nevin would irritate me again with things he said. I like WYSIWYG people, genuine straight shooters. Yes, Nevin makes it be known what he thinks, but often in a rude, crass and irritating way. There is a distinct difference between being honest and forthright and being rude. Have to put that out there. Oh yes, even though Nevin identifies as bi, maybe he’s pan, I can only add gay as a tag because it’s a gay romance but for someone who is so accepting of sexuality he sure does stereotype. I know, I know, Nevin’s a tough, jaded cookie with a heart of gold. No, not gold, brass, but I don’t care, stereotyping is stereotyping, Nev, but I’ll come to that.

Nevin and Colin meet at a crime scene, one of Colin’s elderly tenants has been bashed in her home and Colin finds her. Nevin is the detective in attendance at the scene because of his community services role within the Portland Police Bureau. Colin is a suspect for a fleeting moment but the more Nevin questions him, talks to him – and more than he would like to – the more unlikely it seems he’s involved. However, other incidents occur over the course of the book and Colin happens to have a connection to them all because of his volunteer work. So Nevin and Colin also connect increasingly because of, but not limited to, the case. They end up having sex, which Nevin makes sure to let Colin know is a one off, and that’s supposed to be that, end of. However, theatre and musical loving Disney devotee Colin is not easy to forget. He’s a softness, a calmness, in a world that can be harsh

So, a few quotes from Nevin, and some reasons why I didn’t get along with him.

“Jesus Christ,” Nevin said. “Will you two nancies knock it off? You’re turning my stomach.”
Colin whirled to glare at him. “Are you homophobic?”

My son and plenty of my friends are “nancies.” I don’t like this, not at all. Nevin could drive me nuts. This is not being prickly, this is being rude, stereotyping and being a non-filtered manchild.

“You’re mixing your stories. Ivory towers are for academics, not princesses. Rapunzel was in an ordinary stone tower. And Prince Charming, I’m pretty sure, was from Snow White. Rapunzel got Flynn Rider in the Disney version. I don’t know who the Grimms gave her.”
Nevin was gaping at him again. “Holy shit. That is the gayest speech I’ve ever heard—and I’ve heard guys begging their ‘daddies’”—he made air quotes for the daddies part—“to stuff their big cocks in their hot little holes.”
“Knowing about fairy tales makes me gay?”
“It does if you’re not a six-year-old girl. I bet you can sing the entire Frozen soundtrack.”

To the guy he calls brother, Ford, when Ford declares he has a new tattoo of someone important and that he has just become engaged to her –

“She’s the K?”
“Yeah, and… she’s, uh, my fiancée, actually.”
After a moment of gaping, Nevin buried his head in his hands. “You knocked her up. You stupid fuck, we’ve talked about keeping helmets on our dicks since we were kids, and you—”
“She’s not pregnant.”

For me, that is uncalled for and unpleasant. But he is deliberately written as a surly, jaded man. If you relate to that. If you like that or if you are like that, you’ll probably be fine with Nevin Ng.

And I don’t want to tell you what I would do, as a parent, to someone who asked me the following question that Nevin asked Colin’s father, because he wanted to know if Colin’s father loved him unconditionally. Heart in the right place but, come on, what person asks this of anyone, let alone a parent they just met?  –

“What about you?” Nevin interrupted. “You don’t care that your only son is a great big fairy?”
Harold gave Colin a long look, maybe to assess whether Colin was angry over the question or the terminology.

They play it off casually when Colin’s dad sees Colin is okay, and Colin’s dad makes a bit of a joke about Colin being more of an elf, but I didn’t find it funny. As I said, I struggled with Nevin’s mouth. If I was a friend I’d be telling him to grow up. Nevin is in his thirties and this is late teens early twenties stuff.

Now, to be fair, if I take Nevin in the context of the overall book, then Nevin Ng is not a bad guy, we just clashed. Underneath his crass and rude veneer is a guy who is loyal to those who are patient enough to be let in, or those few he’s known from his years in the foster system, or work. I know he had a hard time growing up, you get a snapshot at the very beginning of the book, but he has most admirably made something of himself. What I particularly liked about Nevin was his strong work ethic and empathy for those who were less fortunate or being abused, I respected that a great deal. I also respected that he wasn’t a game player, even if I didn’t like his style. For me, though, Nevin only really comes into his own in the last 28% of the book. Yep, I can tell you that percentage with the utmost accuracy.

Then there’s Colin Westwood. Colin’s a sweetheart  – slacks, bowties, wealthy family, brave Legolas the cat owner, and all. The very opposite of where and what Nevin came from, of who Nevin is, Colin is very sweet, very endearing, very kind and patient. Is he naïve? No, he’s not. If anything he’s mature and 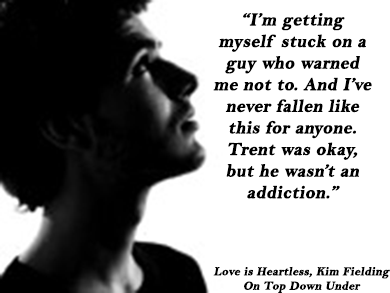 grounded. Let me tell you that sweet and kind do not equal naïve. He hasn’t had much luck in love and his last relationship was more better the devil you know than passion. Trent left Colin because Colin wasn’t as driven as he was, and for another reason I won’t divulge, he’s dealing with being left but not overly heartbroken over it. Colin has never been a risk-taker in his relationships before, the guys he’s dated have been from comfortable/wealthy backgrounds, staid guys, guys that could be settling-down material. Nevin seems a risk, yes, but suddenly one worth taking. Colin knows Nevin doesn’t do relationships, has never had one, but he’s willing to give Nevin a shot. If Nevin leaves then they’ve had some great sex, which they do, and some interesting times, who can knock that?  Colin suggests they have a fling, no strings attached, and Colin is good to his word – no hassles, no strings and no dramas, but he still thinks about what he’s doing.

In the background of the relationship some people are meeting their demise and I felt somewhat sad about that, particularly given they were interesting and I liked them, but that is part of the story. I would have loved a bit more on the crime but this book focuses more on the relationship.

When Nevin finally comes good, and he certainly does, he does it pretty damn convincingly, but I couldn’t let go. I wasn’t sure I felt 100% happy about him having dear, sweet Colin, but Colin wanted Nevin and Nevin fell hook, line and sinker for Colin. That ends up being the truth of it. Colin does squirm into Nevin’s heart, and it’s nice to see for Colin’s sake, and I guess for Nevin’s sake too – I just wished he’d got there a bit sooner and won me over as a reader earlier.

“I think about you all the time. You. Not that enormous cock or that tight ass. The nerd with the bow ties and the collection of Julie Andrews DVDs.”

And the above is a sweet Nevin-style sentiment.

I didn’t love it but I did end up enjoying Love is Heartless, in spite of the Nevin niggles I had. If the book 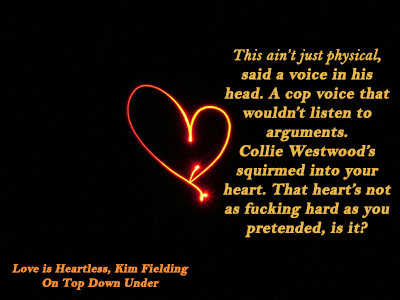 was in someone else’s hands I probably wouldn’t have finished it, but the fact that I did and I actually liked it can be well and truly attributed to Kim Fielding’s talent as a writer, and because Colin was such an engaging and lovable character. Ms. Fielding understands her primary demographic and gives them what they want, and those who enjoy this type of contemporary “MM” romance, and definitely Kim Fielding fans, will more than likely enjoy this book a great deal. There is enough sex, enough of a mystery for a lot of readers, with romance between two opposites-attract guys, where the patient, kind one gets his gruff, jaded commitmentphobe – a winning combination for plenty of romance readers. Love is Heartless is easy reading, for the most part, good for the romantic at heart, and comes complete with a rewarding and sweet HEA. 3.5 Stars!

I’m a big fan of opposites attract stories. I always love seeing the couples work through their differences to become a couple, even if they clash on occasion. Just based on the quotes you put in your review, I’d not be a fan of Nevin. But it looks like he and Colin worked in the end.

Opposites attract can be such a good trope, but there was this imbalance of how I felt about the characters it just didn’t quite nail it for me. Kim Fielding writes well, I have loved several of her books, actually have some reviews in draft of her books, and I ended up enjoying this one, which meant it’s pretty good writing for me to not like someone but still enjoy it overall. Colin is quite the sweetie, loved him, and they did get there in the end 🙂