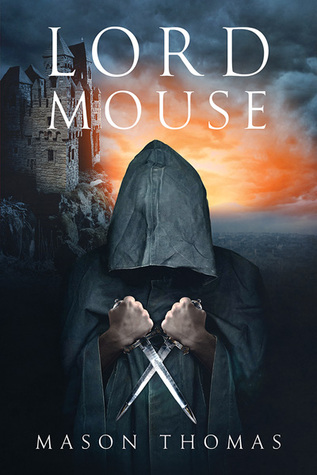 A Lords of Davenia Novel

Scoundrel by nature and master thief by trade, Mouse is the best there is. Sure, his methods may not make him many friends, but he works best alone anyway. And he has never failed a job.

But that could change.

When a stranger with a hefty bag of gold seduces him to take on a task, Mouse knows he’ll regret it. The job? Free Lord Garron, the son of a powerful duke arrested on trumped up charges in a rival duchy. Mouse doesn’t do rescue missions. He’s no altruistic hero, and something about the job reeks. But he cannot turn his back on that much coin—enough to buy a king’s pardon for the murder charge hanging over his head.

Getting Garron out of his tower prison is the easy part. Now, they must escape an army of guardsmen, a walled keep and a city on lockdown, and a ruthless mage using her power to track them. Making matters worse, Mouse is distracted by Garron’s charm and unyielding integrity. Falling for a client can lead to mistakes. Falling for a nobleman can lead to disaster. But Mouse is unprepared for the dangers behind the plot to make Lord Garron disappear.

Well, this was a fun, fantasy, great escape style romp. I enjoyed The Shadow Mark by Mason Thomas as well – I actually read books #1 and #2 out of order but it doesn’t matter as they’re standalones that just happen to be set in the same universe.

Mouse is a terrific character. He’s cheeky, has to think on his feet a lot, knows how to grab a costume as required, and he’s known for a plan or two, even if done on the fly.

“Do you have a plan?” Garron asked, breaking the long silence. “I always have a plan,” Mouse replied. That didn’t, however, mean it was a good plan.

When Lord Garron of Har Dionante goes missing while on a diplomatic mission in Har Orentega, Mouse is contracted by a ‘dandy’ on behalf of Duke Braddock to find his second youngest son. While this isn’t Mouse’s usual job, a political or diplomatic dilemma which includes breaking someone out of another duchy, there is a big purse on offer and he has personal reasons for needing all the coin he can make.

While in Har Orentega Mouse visits as many places he can where he might grab any snippets of information about a nobleman being held, and where that might be. His first stop in town is with an acquaintance, Taurin, who runs a local brothel and has ambitions, and a love of finery. While Taurin doesn’t let on too much, and Mouse is certain he knows more than he is saying, he gives Mouse the name of a captain of the guard, Hawken, who is married but likes men on the side. Hawken is also a bit disgruntled with Lord Degan’s employ. I laughed when mouse availed himself of one of Taurin’s client’s carriages and some clothing while they were otherwise… entertained. Mouse also visits the Orentegan marketplace, usually a source of gossip, but no one is talking about any detained noble. Mouse is also all over the local thieves guild, if anyone has their ears to the ground it’s the guild of thieves, and he should know as he is one himself. Mouse has a way of letting people know he means business, but he’s hard to dislike at the same time. I’ve also never known anyone to be such a master of disguise, whether that be for himself or for someone else in a jam.

Once Mouse has a bead on where Garron is located he uses all his wits to get him out, with plenty of smooth-talking required as well as some muscle and lot of action along the way. Mouse finds himself up against an unfriendly thieves guild, plenty of guards, pesky birds when climbing a massive tower wall, and having to give some sexual favours in return for information, all while he proves tough enough for the challenge and more than just a thief.

This was why Mouse didn’t take on rescue missions. When hired to liberate pretty little baubles from their unsuspecting owners, they never had this much protection. Keeler had warned him, but four guards still seemed especially excessive. And there were more guards farther up the tower, certainly.

Much like I found with The Shadow Mark, the romance is the lesser of the arcs being developed in this book,

although I found Mouse and Garron to have more chemistry than Auraq and Kane. Nevertheless, there is a romance and it starts grudgingly from both sides and builds as the plot does the same. All the while, the MCs have to find out who and what is behind the initial imprisonment as well as try to get back home in one piece. The secondary characters also add to the story and the atmosphere of this universe. And there is another thread revolving around Mouse’s need for coin and the dagger he always carries that belongs to his father.

Mouse was so full of personality and Garron was sweet and kind, nothing like Mouse believes nobles to be -it’s definitely confusing for the quite certain Mouse. Garron was no shrinking violet, once he recovered from Mouse killing a guard to help him escape he was a good partner in his rescue and their adventure, including some twists and turns.  Mouse finds he wants to make Garron happy, something that goes against everything he would normally do or think.

Mouse was comfortable with the suspicion and distrust from others. Someone trusting him at his word was… unsettling. And why did it matter so much what this noble thought of him?

I really enjoyed Lord Mouse. It was fun, fanciful, with good world building and action aplenty. I also enjoy Mason Thomas’ turn of phrase. The way he clearly loves writing these characters and this series is infectious for the reader. If you are looking for a quality gay fantasy series with a dash of romance, nothing particularly on page in relation to sex, it’s more plot and action and fantasy based, then this is a very good book in a very good series. That cover is also another cracker. 4.5 Stars!

This is on my TBR. Haven’t read it yet since at first I thought it’d be dark and then I realized it was, well, like what you described in your review lol. Not dark. So I’m just waiting for the right mood! Glad you liked it 🙂

It’s a good series thus far, Kristen. No, I definitely wouldn’t call it dark and I think you might well enjoy it.

This looks like such a fun story. I would adore Mason, I believe. It’s so hard to find good fantasy books that have good world building. I can tell I’d really enjoy this. Great review, Kazza.

It is a fun series. Yes, cheeky “Lord” Mouse is quite endearing and you would enjoy him 🙂