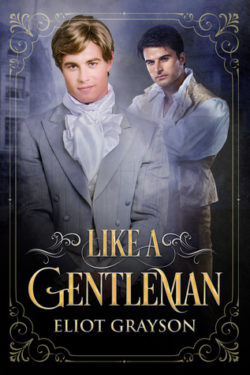 James Rowley, penniless younger brother of an earl, discovers his rejected sensational story has been stolen and printed under another name — and he’s certain his editor is the guilty party. Determined to get his due, he sets out for London to take revenge on the perfidious L. Wells. He means to have satisfaction, even if he needs to pose as a simpering fop in a pink waistcoat to get it.

Two years before, intrigued by his favorite writer’s talent and wit, Leo Wells had visited the Rowley estate incognito, seen James’s portrait — and promptly lost what was left of his heart. Ever since, Leo has fought his obsession with his favorite writer. Unaware of the manuscript’s theft, he’s bewildered and heartbroken when James, acting the part of a sneering dandy, visits him in person only to use his obvious attraction against him.

From Gloucestershire to London to Portsmouth, can two men with society and secrets dividing them find happiness?

This approximately 28,000-word novella contains explicit scenes. Although part of a series, it does not end on a cliffhanger.

I have to say that the synopsis does give you this story in a nutshell. James Rowley’s manuscript is nicked and he assumes that his London editor is the culprit. L. Wells sends a pretty scathing dismissal of James’ latest manuscript, then when it turns up printed elsewhere, well, it does look awfully suspicious. So, yes, James does act the part of a fop and wear some interesting attire to meet with the thieving editor to call him out, disrespect him, and exact his revenge.

L. Wells – Leo – has previously seen James Rowley’s portrait in the family home, on a tour of Winthrop Court, and combined with notes back and forth during the writer-editor process, he’s lost his heart along the way to James. However, it’s hard for him to reconcile the man who has turned up in his office with the man he’s had correspondence with and who looked so angelically handsome in his portrait. Still, when James asks for his address to discuss this matter further later on, Leo can hardly refuse someone of Rowley’s standing, even if he is damnably confusing and infuriating.

Thus begins a lack of decent initial communication. It doesn’t last long in the grand scheme of things, this novella isn’t very long, but, boy, James put a lot into his savaging of Leo. I had some trouble at the first meeting between James and Leo, because of James, but the way he behaved at Leo’s home after was a notch up on the ‘that’s pretty damn horrible’ scale. I nearly put this book down at that point because I had such contempt, and some choice words, for James. But I liked the style of the overall writing and thought I should hang in there. I’m very glad I did. James redeemed himself and I liked Leo from the get-go. I also ended up clipping a lot of quotes and I generally only do that because I like the writing.

Though Leo deserved it all, a queer pang went through James’s stomach at the sight of the ruination he’d wrought with a few cruel words.

Leo loses everything because, hello, you cannot put the nobility’s nose out of joint, and Rowley is the brother of an earl. The obsequious owner of the publishing business fires Leo straight away and fawns over James, more his family name. For someone with few means it’s a huge blow for Leo. He can’t work in publishing, in London, anymore. He lands at his family’s lowbrow alehouse in Portsmouth – hence the series name. 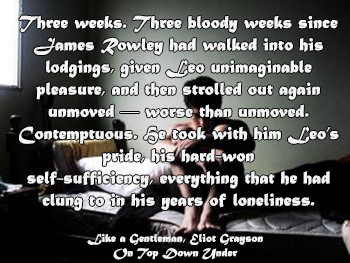 Once James discovers it wasn’t Leo who stole from him, he sets out for London once more, only this time to apologise and to actually act like himself. He also can’t stop thinking about him. He’s more and more upset at his presumptuous and contemptuous treatment of Leo. Of course, Leo is long gone, he couldn’t afford rent after being fired, no one would touch someone who’s upset a titled family. 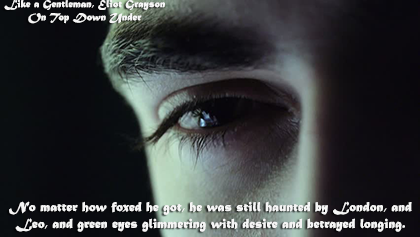 James still lives at Winthrop Court, even though he isn’t the titled son and even though his brother, Rodney, is married. They are close brothers and Rodney likes James staying, looks after him to a degree, though James marrying a woman of title and means would be very nice. I liked that aspect of this novella, the loyalty and love between the brothers.

I also liked that James sets about making a wrong into a right. That as he gets to know about the man, he can see that Leo is honourable, kind, a once in a lifetime love he may have blown. 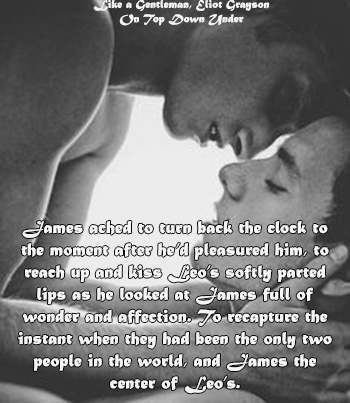 When they are finally together, Leo worries that James’s feelings will wear off over time as James doesn’t have any real money of his own and Leo earns a meagre amount. He has no title and will never be able to keep James as Leo would like…. as maybe James would like. However, things are sorted and I finished this book believing this pair were in it for the long haul, it’s a nice way to finish up a romance.

What worked for me in this book was the fact that the class structure in England was written well –  James had privilege, even as the second son, and Leo was a commoner, a working class man who had no recourse. The way Leo and James thought and behaved was indicative of the period. I cannot fault the author for their writing of the class structure. It’s easy to forget the system when reading historical romance books, and in fiction there are always a few liberties taken, but the overall writing transported me. The only thing that could pull me out was the use of Americanised words – ass, center… I also wasn’t so sure about James using his family name to write a scandalous style of literature to aid his scant income, but it helps the plot of the overall story.

I do believe the brevity of the novella will work against it for some readers. Personally, I do like a well executed shorter read. I have no doubt this definitely would have made a good full-length novel, but there is no questioning the author’s writing skill. That Eliot Grayson made me sympathise with someone I started out disliking… immensely, to then turn me into a fan of his in a novella size book, well, that is quite the writing feat.

There were some sexy times in Like a Gentleman too, and they were well written. Mmm, hmm.

He unbuttoned the flap and pulled it down. The thick purple head of Leo’s cock had escaped the confines of his smallclothes, and a single pearly drop clung to it. James bent his head and caught it with the tip of his tongue, tasting salt and man, lust flaring back through him whether he liked it or not.

In the wrap-up, this is a nice piece of writing, a thoroughly enjoyable and emotion-inducing gay historical that absolutely sucked me in. I cannot complain about a lack of passion – from Kindle throwing to affection – and I’m now looking forward to reading more in this series. Bring on rowdy Lt. Andrew Turner’s book next. 4 Stars!

I don’t read a lot of historical romance but this looks good. I can tell I wouldn’t like James much, at least in the beginning. It does say a lot when you can start off hating a character and end up being a fan at the end. Great review. I love the quotes and visuals.

I guess it’s like anything else, if I get in the mood for historical books then I can’t get enough. This was a really nice novella which had me feeling and I have to feel to enjoy 🙂