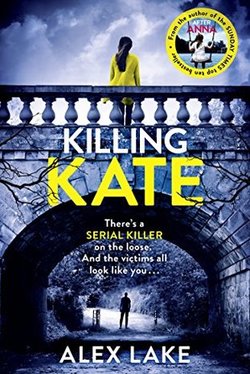 From the author of ebook No. 1 bestseller and Sunday Times top ten bestseller AFTER ANNA.

A serial killer is stalking your home town.

He has a type: all his victims look the same.

Kate returns from a post break-up holiday with her girlfriends to news of a serial killer in her home town – and his victims all look like her.

It could, of course, be a simple coincidence.

She becomes convinced she is being watched, followed even. Is she next? And could her mild-mannered ex-boyfriend really be a deranged murderer?

Or is the truth something far more sinister?

Kate has just ended her decade long relationship with Phil. They got together in high school and have been exclusive ever since. They live together and share everything. The next step is obviously marriage and starting a family. Or you’d think so anyway. Kate, an attorney, has decided that she wants to experience her life a little before settling down with one man. It makes sense really. Phil was her very first… everything. Phil doesn’t take the news well. He thought everything was going along fine between him and Kate. The breakup sends him on a downward spiral. He moves in with a friend, convinced Kate will be taking him back soon. Only that doesn’t happen.

To put some distance between her and the ex, Kate and her two best friends take a trip to Turkey. While there, she gets caught up in a very embarrassing situation with a man who’s about a decade older than her. Thankfully, he’s a gentleman or things could’ve been really awkward. They come home to more craziness from Phil and to discover that the man she met in Turkey lives near her. She’s not overly thrilled over that particular info. Embarrassing situation, remember?

On top of dealing with her crazy ex, Kate is terrified. Bodies are being found within a mile of her home – the obvious work of a serial killer – and each woman looks exactly like Kate. It’s bad enough Phil is driving her nuts. Now she has to worry about her safety on top of it. 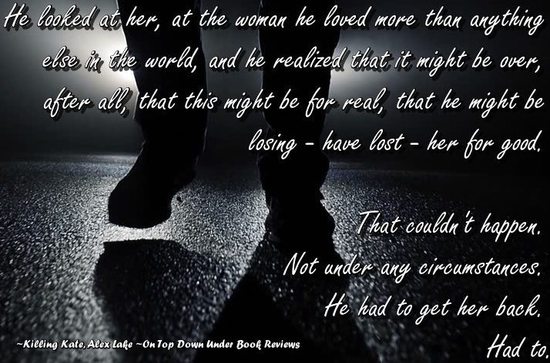 Phil starts drinking a lot and calling and texting dozens of times a day. When that doesn’t work, he resorts to stalking. He’s freaking out because he’s constantly wondering who Kate is talking to, or worse, sleeping with. The reader is allowed inside Phil’s head, as well as Kate’s, so we’re able to watch as he comes unhinged. I felt bad for him at first because he was blindsided by the breakup and Kate didn’t exactly go out of her way to handle it correctly. Of course, the constant harassment and his stalkerish behavior later was out of line so that took away any sympathy I may have had for him early on.

Then we get back to the serial killer. Kate, knowing the killer’s type, drastically changes her appearance so she won’t be a target. But what happens if the target all along has been Kate, regardless of what she does to change her looks?

I’m going to throw this out there before I continue my review – there’s changing your appearance and there’s doing what Kate did. It’s not often I roll my eyes at something a book character does but I found myself doing it a lot with Kate.

The killer gets more bold.

Phil gives a new meaning to the words ‘crazy ex’.

Kate is…. I’m not sure what to say about Kate. No, strike that. Yes, I do. Kate was one of those TSTL characters that I would absolutely despise in the real world. Remember the guy she met in Turkey, Mike? Mike seems like a decent enough guy but Kate is beyond rude to him. For some strange reason, he still wants to date her. I couldn’t quite figure that one out, but it made sense for the story. This was after she led on a coworker, Nate. She knows he’s interested in her in a romantic way. She’s not interested in him at all but that doesn’t stop her from leading him on. Nate also knows an awful lot about the killings, things that have not been made public, which kind of explains why Kate is using him.

Then we have Kate’s best friends, May and Gemma. I liked them well enough. They’re very important when things get dicey in regards to Kate and the serial killer. There are a couple of other characters – along with Kate’s very, VERY annoying parents – who are important to the story but I can’t say why without giving a lot away.

“Go and grab,” her mum said. “not go grab. You aren’t American, darling. I know you like to watch those television shows, but you don’t need to speak like them.”

Kate has reason to be concerned and not just because all the dead women look almost just like her. Someone has followed her in her car, a man’s been seen hanging out near her home in the darkness, and somebody has been inside her house and gotten on her computer and plundered through her file cabinet.

When a woman Phil has spent time with ends up as one of the serial killer’s victims, the police set their sights on him – and with good reason. A couple of chapters inside his head and the reader is thinking the guy needs to be committed for awhile.

Killing Kate goes back in time some. I’m the first to complain about flashbacks in books but the author handled these very well and they flowed with the rest of the story. Those flashbacks give the reader a glimpse of specific things that are very important to the story later.

This is a good book. I read it in less than a day and was really eager to finish it to see how it would play out. Unfortunately, the killer was way too easy to figure out almost from the onset, hence my 4 star rating instead of 5. There are several very obvious characters that it could be but if you really pay attention you’ll know who it is right off and probably even figure out why. There were, however, a few surprises. Not so many that I had an ‘I didn’t see that coming’ moment, but enough to keep me invested in the story long after I figured out who the bad guy was.

Another thing that bugged me about the book are the typos. There aren’t a lot – mostly just quotation marks missing or in the wrong places – but there are enough for me to notice. I probably wouldn’t even mention it if the book was self-published. This was published by a major publisher.

Overall, it’s a good read if you can get beyond Kate’s personality. She somewhat redeems herself in the end but not enough for me to say I liked her. Also note that the killings are described in detail and are graphic. If that type of thing bothers you it might be a good idea to stay away from this book. My GIF above describes the killings in part, but I left out a lot.

This is my first by Alex Lake. I actually bought After Anna, the author’s debut book, before I bought Killing Kate. I’m pretty eager to start on it.

Some Cindi horror to the fore. This sounds interesting and while there are some things that detract, as you noted, overall it sounds like a book that makes you really keen to know what’s going to happen next and how it’s going to be wrapped up.

I think I’m a sick puppy – that gory GIF is so good.

Killing Kate was a good story but I wasn’t a fan of Kate or the fact that I figured out the killer WAY too soon. I’ll be reading the author’s After Anna and pre-ordering Copy Cat, due out in the fall, I think? I had the hardest time finding the right GIF for this review. The ones I found were either WAY too graphic or didn’t depict anything from the story. When I found this one, I knew it was perfect. I guess I’m a sick puppy too because I keep reading this stuff. 😀 Thanks, Kazza. It’s good to… Read more »