I’ve Been Careless with a Delicate Thing, Marina Vivancos 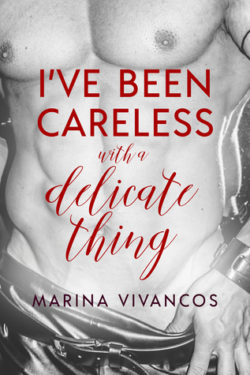 Silas meets gorgeous, grumpy-looking Oscar at a bar. He’s never had sex with a guy, and what better place is there to find someone to pop that particular cherry?
He knows what he’s getting with the broad-shouldered, I-can-pummel-you-with-one-look Oscar: getting bent over a hard surface and satisfied until he’s blaspheming. Turns out, though, there’s a lot more to Oscar that meets the eyes. Needs that you’d never guess just by looking at him. Needs that Silas turns out to perfectly meet.
One night turns into two, turns into three, turns into a dozen. It’s just a little friends-with-benefits relationship with a dollop of kink on the side. No feelings involved, right?
Right. Because Silas is just so good at keeping his heart in check.

I’ve discovered I rather like Marina Vivancos as a writer. She has an unusual and interesting style of writing, one with an emotional current even when writing what is essentially a piece of erotica, as is the case with this book.

I’ve Been Careless with a Delicate Thing started with a personal disconnect for me. It was like there was an 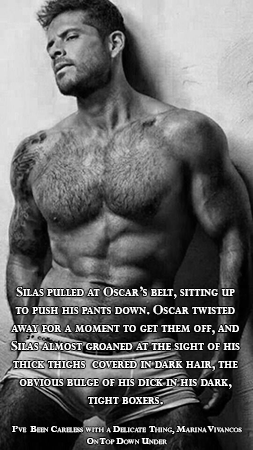 expectation to know these two guys who dance at a bar and end up in bed together. The sex is instantaneous and you don’t get to know the men personally but I just felt like I should have known them.

Oscar takes the inexperienced-with-men Silas home and handles him with some care and concern the first time they fuck. It’s kind of at odds with how Oscar comes across. For the majority of the book Oscar is not freely communicative. Honestly, he’s pretty damn surly. Silas, on the other hand, is open and likes to chat when he can. He doesn’t push too hard with Oscar because he’s relatively happy to allow Oscar to dictate emotional terms.

There is nothing new in this book, the stereotypical “top” is the one who actually prefers to bottom, be spanked, have orgasm denial and some edging in his sex, with the occasional pushing of his boundaries by the less experienced and smaller man.

“People just normally want me to fuck them,” he said. “Well, yeah, with your”—he made a vague gesture to Oscar’s everything—“but not me. I really want to fuck you. If you’re okay with that.”

As much as he’s letting go and enjoying what’s happening, it doesn’t particularly fit within the personal framework Oscar has of himself in the bedroom. This causes a lot of the surly, strong silent type attitude which Silas chips away at. Marina Vivancos does try for an aware and safe sexual erotica piece. Having said that it’s still straight-up erotica with no real ability, given the word count combined with the amount of sex-to-story ratio, to be an especially developed romance. Yet the author still delivers a happy ending, albeit quite quickly. That’s nice but if you go foot-to-the-floor erotic, which the author does in this novella, then you don’t really need to have a happy ending. I guess I’m not fussed either way but others may be. If you like your erotica with a happy ending, all the puns intended, then this novella delivers.

There is a lot of sex in this story, it’s well written, creative, and if you’re in the mood, it’s definitely hot as Hades.

There is no real world, these guys exist in a bedroom and Oscar’s apartment. They fuck and they get to know one another a bit more as they do. It’s erotica so I’ve got no complaints about any world building.

The novella is told purely from Silas’ POV. I do believe at least some chapters from Oscar’s would have added some extra depth.

For those who like a slower burn, that doesn’t happen. This story is slow-burn-arse-about-face as far as the men’s feelings and connection is concerned. It is minutely explored just a bit more at the back end of the book. There isn’t much of it though, it’s more sex, but just enough to leave you thinking they’re a chance of making a good go of it if you’re interested.

In This Iron Ground was a fantastic book, very different, and this was an interesting back-up second book for me, and, hey, Marina Vivancos can certainly write down and dirty with the best of them. 3.5 Stars!

Oh, I do so love when you give us the NSFW warning. 😉 This looks like a nice and sexy story. I can’t say enough about how much I love the photo and GIF.

Thanks, Cindi. It was fun having an erotica book to read again.