Inside His Reflection, Zathyn Priest 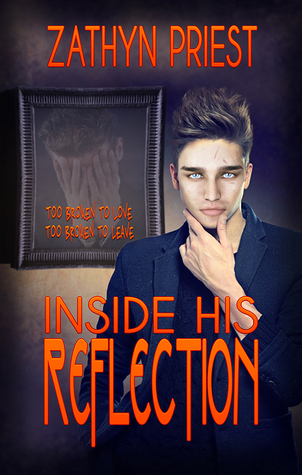 A blind date leaves Harry reeling, and another date goes as badly. Scars on Elijah’s face are clues of a broken soul, yet Harry can’t walk away. Not even when he learns Elijah sees a dead man in mirror reflections.

Elijah’s sanity snaps. Blamed for crimes he didn’t commit, Elijah has already survived a brutal murder attempt and now hides under a Protection Program. Harry must have faith he is innocent and fight for Elijah’s stolen rights.

Can Harry do this without losing his mind, his own rights, and the man he loves?

I’ll just get this out of the way before I start my review – I am huge fan of this author and I believe that’s pretty well known. My first ever book in the LGBT genre was one of his and I’ve not stopped since. To say I get excited over a new Zathyn Priest release would be an understatement. I was thrilled to get my hands on Inside His Reflection.

I ended this book unsure of how to review it. Even now, a little while later, I’m still unsure of what to say. A majority of the book involves things and characters that I can’t talk about. It would spoil everything for those who plan to read it. What happens when your favorite character in the book is one of those you can’t talk about? So, with that being said, I will apologize in advance for the lack of detail in this review. I hope others who read this keep them out of their reviews as well. 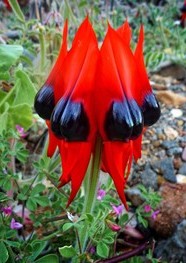 Harry is a jackaroo. You have no idea how cool it is for me to say that because my Aussie blog partner and I had just discussed the difference between jackaroos and cowboys not 2 days before I bought this book. Strange coincidence. Anyway, Harry’s family owns Opal Creek Station, a cattle ranch open to tourists, and when I say he’s a jackaroo, I mean it. 😉 One day he gets set up on a blind date. That blind date doesn’t quite go as planned. Instead of meeting the guy he’s supposed to meet, Ian, Harry ends up kind of making a fool of himself with a man who most definitely is not Ian, Elijah. Elijah is a stockbroker and a bit… stiff and standoffish. You can imagine how that meeting goes. But not all is bad. This wrong blind date guy is pretty hot and when he agrees to a real date, Harry is convinced that he’s being given another chance. Only that date? Thanks to a misunderstanding, it ends in a not so great fashion. Poor Harry can’t catch a break. Two strikes already and the guys haven’t even spoken more than a couple of times.

Meeting someone in a small country town wasn’t easy for straight guys. It certainly wasn’t a simple task for a gay man. That didn’t mean Harry planned to settle for any willing guy. He wasn’t attracted to Jackaroo types. Moleskin pants, plaid shirts, and rough workers hands did little to turn him on.

The misunderstanding gets cleared up by a coworker of Elijah’s (you’d have to read the book to see what I mean) and Elijah contacts Harry to apologize. This begins a friendship of sorts between the two, though Harry would really love to see it go much beyond that. The problem is that Elijah has secrets. These secrets could destroy him if they were to be made known, even to the man he’s quickly falling for. 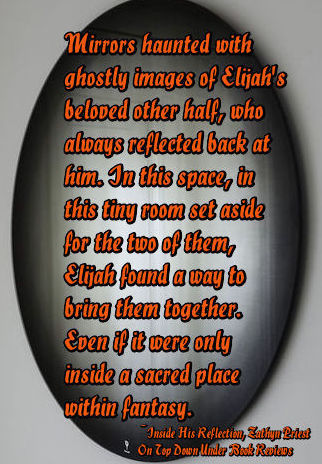 As a teen, Elijah was forced to endure things no one should ever even think about, much less live through. On top of that, he had a twin, Chris, who was his entire world. People talk often of the bonds between twins, but Elijah and Chris’ bond goes beyond even that. Elijah sees Chris in mirrors… he sees him and he feels his emotions and thoughts. While a lot of that falls into those things I can’t really go into in my review without adding spoilers, I will say that the author seriously brings out the readers emotions when it comes to Elijah and his twin. I read somewhere before I read this book that it was necessary to keep tissues close by. That’s a very true statement because I teared up several times while reading it.

Then we get back to Harry. Harry has his own twin, Henry. Henry is kind of known as a love ’em and leave ’em type of guy. I can’t say I was a huge fan of his early on (for a variety of reasons), but then the author threw out a surprise in regards to Henry and I started to adore him almost as much as Harry.

Harry has quickly fallen for Elijah. He doesn’t care what’s in his past. He just wants to be with the other man and he wants to help him fight whatever demons he’s obviously been fighting for so long. Elijah wants Harry too, but how can he fall for someone who would likely run off kicking and screaming if he found out who the real Elijah is?

Eventually everything comes to a head and Harry is forced to either step up for the man he’s fallen in love with or take a complete step back. 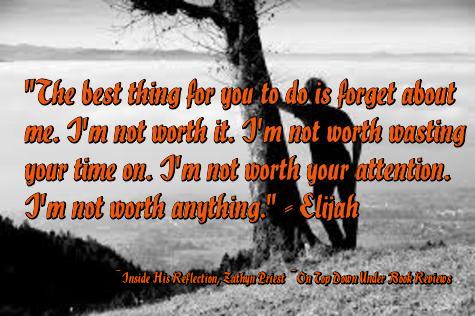 There is no end to what I could say about this book from there. However, I refuse to give spoilers (like I mention above) and pretty much anything else I say will do just that. Suffice to say that Zathyn Priest has written another winner. Between the horrific past abuse of Elijah, to a character with autism, to everything in between, Inside His Reflection is a very emotional story from start to finish. Because of the seriousness of the story, I didn’t expect to see Zathyn Priest’s classic humor (if you’ve read his others, you know what I mean), but he definitely found a way to make me laugh at the perfect times when I thought it wouldn’t be possible after all the ugly tears I’d shed up to that point. Harry and Elijah are simply perfect for each other and I found myself eager to see how they would finally work through all the issues to find their happily-ever-after.

I can’t not mention Grandpa Jack. Oh, how I adored him! Political correctness means nothing to him and if you have a sense of humor, you’ll get a kick out of some of the things he throws out there. I found myself giggling more than once.

“I reckon they’re poofs.” Jack leaned on the walking stick. “Sitting too close to each other. Hands touching, legs touching. Gotta be poofs. What’s going on these days? Everywhere I look, men are turning into poofs.”

“You got the Midas poof stare, Grandpa,” Henry replied.

Another thing I love about this book is that it’s very Aussie (set in Adelaide). You all know that the Down Under part of On Top Down Under is my Australian blog partner, Kazza K. Because I’m (now) used to the lingo, I always have this fear of reading a book set in Australia and have the lingo and everything else Americanized. Sometimes it doesn’t matter if (like in this case) the author is actually from Australia, the lingo still gets changed before the book gets published. I’m glad that didn’t happen here. 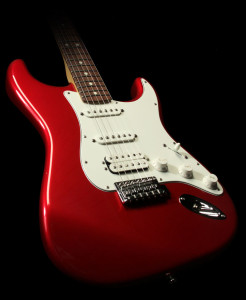 Overall, another great book by Zathyn Priest. There were a couple of things I wish would’ve been elaborated on more, but nothing that took away from the story as a whole. I will say this… if you’re looking for a sex-fest, read another book. This is not that type of story and had it been filled with page after page of sexual situations it never would’ve worked. Kudos to the author for touching on subjects (abuse, autism, violence) that others tend to shy away from. Not only were they essential parts of Inside His Reflection, but they were written perfectly.

I love this review, thanks for not giving away spoilers. I can’t tell you how many times Zathyn made me cry while he was working on this book, and even though I’d read it already, it still made me cry and laugh out loud when I edited it. Keeping the lingo Austrailian was very important to Zatyhn and I, as to Americanise it would be to change his authors voice, which as an editor, is something I always do my best to make sure doesn’t happen. I really do love it when I see reviews like this, and one of… Read more »

Thanks, Val. I never would’ve added spoilers. I would’ve been furious had someone ruined the story for me before I could read it. Zathyn was my first favorite in the genre and I’ve reread all of his books several times. I can see me doing the same with Inside His Reflection. It definitely brings out the emotions in the reader. I stayed teary pretty much throughout. But then he had me laughing as well. It’s a great balance.

Aww, you added a Sturt’s Desert Pea in the review. So appropriate as it’s set in SA and their state emblem. I cannot grow those suckers here in Sydney and I love them 🙂 Botany aside, it’s a terrific review, Cindi. Makes me want to pick it up and read it – if only there were enough hours in a day – because I’m interested in all the primary topics you mention. I’m also so happy when the lingo is kept Aussie in an Aussie book. So many don’t do it and mores the shame. We were just taking about… Read more »

I knew you’d appreciate the Sturt’s Desert Pea photo. He mentions it by name in the book and even says it only grows in certain places there.

I really enjoyed this, as I knew I would. I loved reading the Aussie-isms that I hear (read) on a daily basis from you. I’m really glad the story stayed true to the setting. Everything else – the violence, autism, past abuse, etc. – were written with sensitivity. It’s a really good book.

The cover is so perfect for the story and Elijah.