In The Hatred of a Minute, AD Tonsi 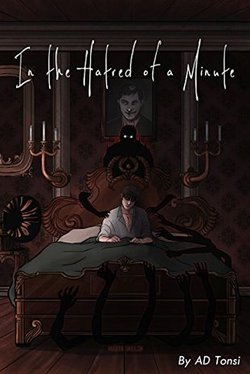 After the death of his best friends, Arthur returns to London to take possession of their estate and begin a new life. But the house he inherits holds dark secrets that wind their way into the heart and mind of its new Master and his young muse, breeding obsession and jealousy. Will the affection between the two men lead to love, or tragedy, and just how did Arthur’s friends really die?

I’m typing this review unsure of how I really feel about the story. The writing is good and I like the premise. A couple of things were just too out there for me to say I loved it. It started really well. Arthur, a struggling artist in Paris, sadly just got word that his two best friends, Sophie and Harry, have been killed in a tragic accident and that he has inherited their estate in London. He gets there just in time to pay his respects before taking up residence in his new home. The large house is dark and foreboding, totally unlike what Arthur would expect from his friends. He asks the butler, Quint, to put his things in a guest room, knowing no way would he be able to sleep in the same bedroom his late friends did.

Arthur starts having scary dreams his first night. As time goes on the dreams get more violent and intense.

Sophie and Harry’s friends start showing up to introduce themselves to the new arrival. One is a very famous architect, Matsuda. Matsuda is… odd. High in society and successful, Matsuda is known by those far and wide for his unique designs. When he shows up to meet Arthur the young man is in awe and more than a little nervous. Matsuda takes him under his wing – whether Arthur wants it or not.

Arthur’s art is bland. As in, so bland it’s obvious that there’s no passion behind the artist. Matsuda insists that he must experience things, exciting things, that will carry over to his art. Arthur knows that’s true, but what can he do? Well, Matsuda believes he knows. He hosts a party at his home to introduce Arthur to his famous and wealthy friends.

The boy doesn’t look a day over fourteen and it makes Arthur squirm. He should be at home, tucked into bed, not in a rich man’s parlor, on his knees for whomever orders him for the night.

The party was the first thing that had me shaking my head. An underage character was introduced who did something on-page to one of the characters. Nothing was forced or anything like that. The young character was simply part of the ‘entertainment’ of the party. Later, what this young man had done made sense to one of the other characters in the story but it takes awhile to get to that. This book is set in the 1800s so I know things were different back then than they are now. Things that are scandalous in the here and now were apparently not so taboo back then, as long as they were done behind closed doors. I get all that but I still had a WTF? moment.

The party doesn’t inspire Arthur – he actually can’t get away fast enough – but a few nights later he has his driver carry him to the more seedy part of town. There, he sees a man – a rent boy – who stirs something in him. Sure, he’s attracted to the young man, but this is different. He wants to paint him. It takes another visit to the same area to find the man again but when he does he makes an offer to the young prostitute – come stay with Arthur for a week so Arthur can paint him, get paid well, then be on his way.

Only things don’t quite happen that way, though the inspiration is finally there. He starts painting and each new canvass is better and more passionate than the one before it.

Arthur has finally found his muse.

Not only is Arthur painting but his art is now better than he’d ever hoped it could be. Ellis, aka the muse, is exactly what Arthur needed to kick start his creativity. All of this is fine and good until it’s just not. Not only is Ellis his muse, he becomes Arthur’s obsession. There’s a lot of sexual tension between the two men but until the paintings are done Arthur refuses to follow through. He wants to. Oh, how he wants to. He doesn’t because he fears that once he and Ellis have sex all inspiration and passion to paint will disappear.

Then we get back to the dreams that Arthur keeps having. Each one is more scary than the other, all involving Sophie and Harry. There’s talk that their deaths were more than a random accident but people refuse to share the details with Arthur – until much later.

Matsuda is also a strong presence in Arthur’s world. He sets up a showing at a gallery for Arthur’s paintings, scheduled in a few weeks. He’s pushy and shows up at odd times in hopes of meeting Arthur’s muse. Arthur, in his obsession for Ellis, refuses to allow the two men to meet. He believes that once that happens Ellis will no longer belong to him and him alone. It doesn’t help that Matsuda makes it no secret that he wouldn’t hesitate to bed the prostitute after seeing the paintings of the man.

Everything comes to a head when there’s a séance held at Arthur’s home. He doesn’t want to allow it to be held there but he’s basically bullied by Matsuda until he agrees. This is when the story takes a very strange turn. I can’t say more than that. 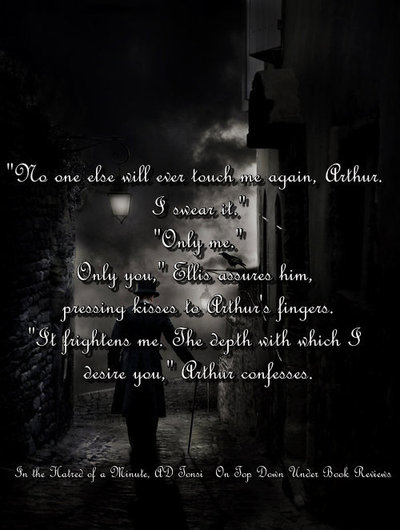 This was an interesting and somewhat unique story. While it would be considered a romance, it’s also about obsession. Arthur is very obsessed with his muse. One comment or imagined event has Arthur’s jealousy and obsessive ways coming out. He knew Ellis’ profession when he hired him, yet he allows the thought of all those men before him fester in his mind until he almost loses it.

Then there’s the fact that he still doesn’t know what killed his two best friends.

When the answers are revealed the story takes a turn.

I enjoyed this but I had a few issues with it. Like I said, the writing is good but… I think the story needed to be a few pages longer. When the resolution of the story occurred I felt that there should’ve been more of a build up with more details added – that pull the reader in – before it got to that point. I get exactly what the author was trying to do in order to have specific things connected. However, I didn’t have an ‘A ha!’ moment when that occurred. With Arthur’s obsessive ways I could easily see where the story was headed but it seemed rushed to me.

I didn’t like Arthur but I understood why the author wrote him the way he was written.

I despised Matsuda from the first time he was introduced to the story. That didn’t change even for a second once I got into it.

Ellis, I adored, almost from the start. However, and this is a big however, he confused me when all was said and done. He does something so out of character to the sweet Ellis I’d been seeing that I had to read that particular section a couple of times. I was still confused. I couldn’t tell if he did this of his own free will or if the so-called paranormal aspects of the story contributed to it. It’s like he turned on a dime, so to speak.

Harry and Sophie were both dead before the story started but I didn’t like either of them either. I can’t say why without giving something pretty important away.

There’s an epilogue that kind of explains things that occur after the big finale. It made sense to the story but it did nothing to endear me to Arthur or the others.

Overall, a nice read. I put a ? above (next to ‘genre’) because while this is a romance of sorts, it’s more about obsession and jealousy. I had a difficult time rating this. It was actually a 4 star read until I got to the resolution of the story and was left confused by a couple of things. I’m still going back and forth between 3 and 3.5 because I ended it with more questions than answers.

I would still be curious to read more by this author.

I love the cover. The title, however, I’m not quite understanding.

Hmm, this one sounds like it has all the right ingredients but maybe not mixed together right, or not left long enough to bake, so to speak. Love the pic at the bottom with the quote.

I had breakfast with a review, my favourite way to start off a day 🙂

Thanks, Kazza. It really does have all the right ingredients for one hell of a story. I just wish there were a few more pages added. I’ll still check out more by the author.

This photo/quote was the one that gave me fits that I told you about. This is actually the 2nd photo. Word Press wouldn’t allow me to – no matter how many times I tried – add the other one for some weird reason.