In From the Cold, Mercy Celeste 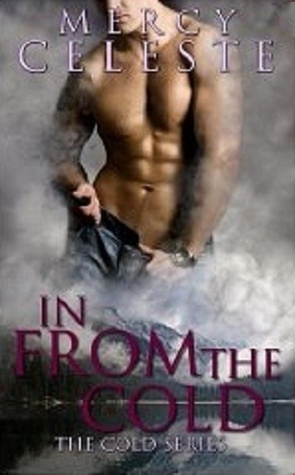 A great read with angst, tension, pain, and hurt.

There’s a lot of pain behind the words in this book, behind the characters. It’s a strong, intense read.

In From the Cold is primarily about two men, Nathan Truman and Quinn Anders, who were childhood best friends, youthful, quasi-lovers, who have let time, denial and self destructive behaviours distance them.

Nathan left home after graduation and enlisted. Now he’s the deputy sheriff in his home town, and Sheriff Theo, Quinn’s father, has been shot. Nathan is the typical small town, in denial, ‘marry a woman have a family’ kind of character. It hasn’t worked and he’s fractured as a person and having to contact Quinn sets up all kinds of feelings and conflict.

Quinn was hurt when Nathan left after graduation, after a night of emotional significance to him. He’s living a life many would love but in reality it’s a lie, and without the right person there, he’s been self destructive and hit rock bottom. When he gets the phone call about his father from Nathan he’s been sober for approximately 3 years. Quinn is also conflicted about seeing Nathan again as well as the circumstances in which he’s going to see him.

When Quinn comes home he and Nathan are thrown together, there is a murder to be solved, a murderer on the loose, and feelings are running high. Plus sexual tensions reappear and cravings for substances and sex dog both during a stressful time. In amongst this you get to meet Nathan’s family who are wealthy, but they’re portrayed as pretty average, caring, family-oriented people. They are like family for Quinn as well, and pick up the same role now that he’s back in town as if he’s never been away.

In From the Cold is interestingly written in a style best described as clipped, it’s a quick back and forth between character’s POV. The dialogue, scenes, and timelines move at a fairly frenetic pace. It was good and it suited the content, by and large, but there were a few areas that were positively ADD without meds.

Both MC’s narratives were pained, but they were different in their delivery. Quinn lacked a filter between his brain and his mouth, Nathan had too much of a filter – ‘Nate’s voice was rough, distant, almost angry. Controlled. He had control down to a science.’ Quinn had little biological parent interaction growing up. His career can best be described as a hedonistic, Peter Pan lifestyle. It swallowed him up. Nathan had a rock solid career, family that supported him, in more ways than even he knew, but he had experienced denial, living in a war zone and divorce, all of which scares the shit out of a person and tightens actions and behaviours right up.

The MC’s were both flawed and damaged. I like flawed and damaged. Although I can’t say I loved either of them – both were selfish, difficult and aggravating – they were, however, interesting and mesmerising. When they were in-sync they worked, but it was hard for them to get in-sync. Sexually they were raw, angry and made sense. I usually have to love at least one MC in a book to rate it 4 stars and above. Mercy Celeste seems to have immolated this pretty concrete parameter of mine.

I know people feel that this book was dark, and, yes, I suppose it was, but I could have taken more. I wanted more – post event flashbacks would have been fine with me. Nathan was ambushed, held hostage and raped. I felt the rape either should have happened earlier in the book, to draw out more post-rape emotions and reactions and have it unfold within a more realistic timeframe. It was too rushed, given what happened, it did the book a disservice. Or, because I enjoyed the rest of the book, what I guess I’m actually saying is that the book should have been longer to incorporate more post trauma development. Things progressed too quickly – three weeks after a major physical and psychological attack to be handling Quinn, love and sex, is too soon. Not to mention Nathan was slashed up very badly, internally abused, and he was on a cocktail of antiretrovirals. That’s a lot to process and deal with. There is no way emotionally Nathan could have recovered so quickly. It takes a lot of work with people who have suffered rape, let alone someone deeply closeted and normally so in control. His control was ripped from him in the most brutal of ways. I had a problem with this aspect of the book, but I’m picky about this.

I thought long and hard about the rating here. I enjoyed the book, their journey, Mercy Celeste writes a (dark) book with passion. The reason it’s not 5 stars is that the last quarter isn’t strong enough from a psychological standpoint for me, it could have been, it edged so close to it, but it was rushed. Post rape didn’t have enough substance or time to develop like it should have. The writing is strong, but Beyond Complicated set the bar for me, so 4 stars it has to be.

PS: I will definitely read a sequel if it comes along, however, I’m happy where it ended. I got enough out of the ending and epilogue to satisfy me. It was a complete book in my mind.