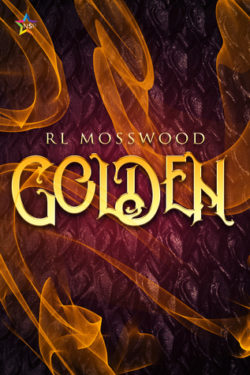 Harem boy might not be the most appropriate role for someone who’s never really seen the appeal of sex, but Elin’s status as dahabi: golden in a land of tan and brown, has marked him for The Dragon’s service since birth. He’s content enough with his life of uncomplicated, if restrictive, luxury, until an unremarkable chore becomes a case of love at first sight.

Mysterious newcomer Hathar, a roguish “merchant adventurer” from far-off lands, ignites an exploration of Elin’s first taste of physical desire, as well as a desire to experience life beyond the palace. Now, they must find a way to escape before Hathar’s ship departs, stranding them forever in The Dragon’s harem.

Elin is a quiet harem boy who doesn’t really gel with the other men in his palace cohort. They like wresting, general sport, rowdy card games and being sort after by the Dragon herself. Elin likes to keep to himself and maintain a low profile away from the Dragon.

When someone new turns up outside Minal’taneen’s palace, the Dragon’s guards assume he is dahabi and bring him into the palace for the harem. Only this dahabi doesn’t come quietly and is roughed up. Becauase Elin is not high on the pecking order within the harem he gets odd and sundry jobs, like cleaning up the somewhat rowdy new arrival for the thirty six cohort.

Hathar is attracted to the blonde and golden-skinned young man who has to look after him. As he’s being bathed he makes a play at a shocked Elin. Elin has never been a sexual being, throwing up over the Dragon at her first and only attempt to bed him. Hathar apologises, but still finds himself drawn to Elin.

As Elin finds himself increasingly attracted to Hathar, which is confusing to someone who has never had these sexual or psychological feelings of desire and want before, Hathar allows Elin to dictate the terms of what they do.

It was strange for Elin to think that his home was someone else’s myth. As far as he was concerned, it was the world beyond that might still prove to be mythical.

Hathar has tales of sailing the sea in what was originally his father’s merchant ship. However, Hathar and his crew are open to looking for treasure as well as a bit of merchant trade. That’s the reason he went searching for and found the magically warded Milan’taneen in the first place. After a minstrel’s bawdy song about a magical palace with treasure under a woman’s bed, Hathar and his crew decide they wanted to find that treasure. It was easy enough getting into the palace but now the trick is for Hathar to get out. None of the harem can leave, anything they want is provided by the Dragon and procured by the palace guards. They may live in luxury but it’s nonetheless a prison.  Hathar needs an exit strategy.

“We belong to her. No one mentions the details, but I get the impression that some kind of confinement is involved when men are removed from their cohorts. It’s not a good thing.”

Boy, does the Dragon have a lot of harem boys at different ages waiting to mature into her bed mates. She’s all about enjoying singing praises to Helcamet, her god, through a good orgasm. Something Elin hasn’t understood. Until now.

“I don’t think I’ll ever be the type to sing hymns to Helcamet, but the way I feel with you, if that’s how The Dragon feels with all of her dahabi, I can see how you could base a religion on that feeling.”

For those who are worried, there is no het sex in this book, it’s just intimated at. I wasn’t sure whether with a harem boy in the blurb it might lean toward/be erotica – it isn’t, it’s a romance with a good plot to sex ratio. Not much more I can say about the novella without telling the whole story.

Nothing super fantastical or action-packed occurs in Golden. There is not much dragon activity going on, despite the name of the being who rules the palace. Both MCs get a perspective throughout which helps you understand their feelings. Golden is essentially about two men who find themselves when it is totally unexpected, the awakening of desire in one of them, and understanding something of value when it’s presented.

I wasn’t sure going in how I’d feel about this one because fantasy in a novella can be a bit hit or miss. I liked the premise and I definitely enjoyed Elin and Hathar’s story. It’s a sweet romance with nice MCs. Some decent fantasy world building, which is mostly centred around the palace with a touch or two of Hathar’s life at sea, very much added to my overall enjoyment. 4 Stars!

This looks like a interesting love story. I’ve never really understood why people are funny about het sex in gay romance books. I love the GIF and quote you used.

It is an interesting and sweet novella, and while there wasn’t any het it is mentioned as the Dragon is female – but if there was, I’m into different parts 😀