Gazes Into You (Mr and Mr Detective Story #1), Alex Jane 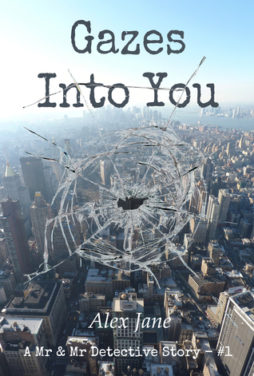 Ex-detective John Right likes to watch.
There’s no harm in it.

The latest object of his obsession—a twenty-something stranger who chains his bike outside John’s office—doesn’t feel the weight of John’s eyes on him, doesn’t know about the secret recordings or what John does with them in the dead of night. Except when the kid disappears, John finds himself doing far more that just watching.

Reluctantly, John has to start thinking like a cop once more as he frantically tries to track down his mystery man. Although when he finds him, John is left with more questions than answers. And the more he learns, the more he wishes he’d never started looking in the first place.

This was a strange book, I liked it but it also went in another direction to my expectations based on the blurb. It started really strongly – John likes to watch the younger guy who chains his bike up across from his work most nights. He jerks off to the guy’s image that he takes off the security camera. Normally this type of storyline runs the path of the other character being an exhibitionist… or someone has to repent with a bit of angst. Whatever. I’m good with either. But this book doesn’t go either of these ways. It becomes a sweet contemporary romance, with a mystery to be solved. The mystery I expected, the sweeter storyline not so much.

There were a couple of empty beds, pristine and waiting, and two that were occupied. John tried not to look at the patients in them. It was all too easy to remember himself in their position.

The guy John has been checking out? – peeping on? watching? – disappears, so after about a week of no-shows, John starts looking for him. John finds out the guy worked at a local bar and when he talks to a women behind the bar he discovers she’s friends with his mystery man – Jay or Jason – and that she filed a missing persons report but was fobbed off. After some more sleuthing work by John, who is an ex-detective, and his best friend Chris, who is still on the force, John finds out Jay/Jason is in hospital in a bad way. Someone beat and tortured him and threw him off a bridge. John goes to the hospital every day and looks after Jason who is in an induced coma. Chris tells the staff that John is Jay’s “cousin” so they allow him family access. It was interesting seeing John put an actual person to the image he’d looked at on the security pictures. Puts a new spin on things and John feels guilt, tense about it. But John also has to deal with some demons from his past after being medically discharged from the force.

When Jason comes-to eventually they realise he’s still in trouble – one of the people involved in his kidnapping and beating, who tried to kill him, is a cop. They don’t know who that cop is and to add to that, someone has been asking about Jason at the hospital.

Basically, Jason doesn’t know why he was targeted. Why his abductors asked him where ‘it‘ was. He doesn’t know what the ‘it’ is let alone where it is. There are several angles as to why Jason might have been grabbed, and suspicion grows about who the cop might be, but I won’t go into anything further because it becomes spoilerish.

Because it’s not safe for Jason to go home, Chris volunteers John’s place for Jason to live at while he recuperates, much to John’s horror. Jason feels comfortable and safe around John so he’s okay with the idea. He’s also very badly banged up still so he needs support. But John is worried about how he came to know about Jason and that when it comes out Jason will hate him. All of the people around John know he has voyeuristic tendencies. They tell him to keep them under control or to not do anything silly but it isn’t until later there’s a reason given as to why he does it. It’s one thing to tell someone to keep something under control but when it’s become ingrained in their psyche it isn’t that simplistic.

What was he thinking? What the hell was he even doing there? It made no sense. He should be going home, calling Brian to tell him he was feeling better and coming back to work, not sitting here pretending to nurse a man he was pretending to know. The whole thing was utterly fucked up.

I liked John warts and all. He may have his issues, but he has a good heart and is loyal. Jason is fairly easy going and comes to his own realisations about John and his feelings. I also love an age gap – John is nearly forty and Jason in his twenties. But as much as I liked them the book didn’t gain as much sexual momentum as it could have. The middle section got a bit bogged down in everyday living at John’s apartment. It also lost what I thought might be a kink factor, which disappointed me. I’m not very big on sweeter contemporary romance novels unless the MCs really speak to me, and as I said before, I liked John and Jason but they didn’t make me love them. If the chemistry isn’t working then the other primary arc has to really be on point and while the mystery was interesting it wasn’t edge-of-my-seat. However, I kept reading because I wanted to know why Jason was nabbed and beaten and who did it.

A lot of this book is spent with Jason recovering, which I thought was realistic, and working on the case, which was good. John and Jason get closer until the bell tolls on John’s voyeurism, they move apart, then they move past it.

“You don’t get it, do you? If you hadn’t been—watching me—I’d be dead now. He would have found me in that hospital, and I would have never woken up. So, I get to say thank you. Even if you don’t like it, I get to say it.”

Chris figures prominently and there are a couple of other friends. I liked Chris and Greg, John’s friends, and Marty, Jason’s friend, is a bit of an unknown. So the MCs relationship doesn’t exist solely in a vacuum, another good aspect of the book. When it’s time for John to fess up as to why/how he knew things about Jason he couldn’t know without having seen Jason before, things fell apart. Unfortunately readers aren’t privy to that conversation as it’s off-page. All we see is a resigned John then an angry Jason suddenly packing to get out of John’s apartment. Chris comes around later and tells Jason why John does what he does. That he’s really a good guy who has looked out for Jason, but he completely understands why Jason would be pissed off. I didn’t mind that Chris explained things but it should have been a back-up conversation to the communication between John and Jason.

I’m also glad that John let someone go. Good for you, John – cryptic but you have to read the book.

This was a nice book. Sweetish. Some may have issues regarding the peeping component at the beginning but John isn’t a bad guy and he does think about it and make amends. Personally, I would have liked the book to have been unapologetic in that regard instead of evolving into a sweet contemporary story. The crime storyline rolled along at a decent pace throughout.

I picked this up on Amazon because of the blurb, and while it didn’t really go in the direction I expected, the book was enjoyable. It needed some tighter editing as a few words were missing and commas/full stops went astray, but not enough to pull me right out of the story. It’s easy to read and it has a HEA and an epilogue for those who like that in their romance reading. It’s also the first in what could be an interesting series and I’ll possibly read book #2 when it comes out. 3.5 Stars!

The first thing I saw was ‘age gap’ and we know how much I love characters with age gaps. 🙂

I got really interested in John and Jason’s story. I’m curious to know why Jason was targeted and why John is voyeuristic. The off-page thing would’ve bugged me. That seems like something very important to the story.

It’s amazing the amount of people who love an age gap in their romance reading 🙂 Yep, I stayed with it because I needed to know who and why.