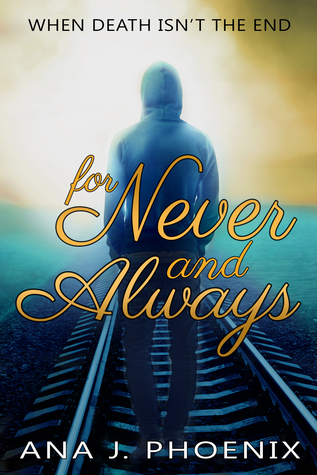 Seth finds himself alone at an abandoned train station, with no idea what happened, or how he got there. He boards a train, only to discover it’s a special express transporting the recently deceased to their final destination. The conductor tells him he’s having a near-death experience. Seth wonders if it has something to do with his violent boyfriend, but that doesn’t matter. All that matters is getting the hell off the train before he actually dies. But when he spots his best friend and secret crush among the traveling dead, the urge to leave fades…

The blurb is enough to give any potential reader a good idea as to what this book is about.  It’s also easy to spoiler this book in a review so I’m just going to break it down into likes and dislikes. Oh yes, one thing I noticed is a lack of a potential trigger warning. There is a description of spousal/intimate partner rape and domestic violence. They fit perfectly within the story’s framework, and nothing is gratuitous. It isn’t over the top, it’s goes to  causal of attitude and behaviour. There is also mention of rape by another character but that is really skirted around fairly quickly, albeit quite sadly. Again, it fits into the story being told and the character’s life. I read very dark books so it’s not nearly as edgy for me as it may be for others who read sweet(er) romance. If rape, DV and suicide are triggers, then perhaps tread carefully. For the majority of this book it is a sweeter contemporary romance within supernatural or spiritual realms.

age, big age gap romances, jock/nerd, billionaire/down on his luck, shifter/shifter, shifter/human, rent boy/customer, musician/band tropes. It’s a friends-to-lovers in the afterlife while riding a ghost train with one MC dead and the other dying/in limbo, both with some hard choices to be made.

The MCs, Carter and Seth, are so wonderful. I’m a big characterisation lover. If you can make me fall for your characters, you’ve grabbed 9/10 of my attention. I felt for this pair – they’re very sweet, their devotion is incredibly touching, and I believed in their love under  difficult circumstances. But when they needed each other the most… there they were.

Seth has an opportunity to go back to life again. He is the only person on the train who can see transparent doors which will allow him to leave without a designated stop. But will he leave, given his true love is on the train to meet his end? I was so impressed by Carter’s need to get Seth off the train and back into the world of the living again. Seth was also invested in making sure that Carter was prepared to move on after death. They both had baggage that the other felt was important to help with, yet they both had to embrace it and make choices for themselves as well. I liked the idea of the library, where everything you’ve ever written is in your book, or the baggage room, where there’s some very emotional connections with your former life.

It had a bi MC who was not depicted as a shameless slut. Thumbs up!! Bisexuality is often a

football of a trope in romance, the character is tossed around as if they can’t keep their hands off everyone and can’t commit to one gender. Or is gets appropriated as GFY. That was not the case here. Carter loved his fiancé, he was never going to be unfaithful to Rachel. Seth did not know his friend – whom he loved – loved him back. Circumstances and events in their life didn’t allow them to connect in a loving, sexual way or to know how the other felt. Secrets were kept with good intentions. However, in the afterlife – of all places – everything aligned for both young men’s truths to come to light.

I liked the way the author covered a controlling partner and physical/emotional domestic violence. The words chosen are like those picked from a case study of DV – the manipulation of the person who abuses and the ever-increasing guilt and need to believe there is a change in the abuser by the abused. The author’s narrative on the topic is not judgemental. That it’s two men in this book, in this instance, is good to see because men suffer DV in same-sex relationships and it’s often quite stigmatised. Seth could see no way to get away from Tony, his partner.

Suicide is handled quite well in the confines of a romance setting. Carter tended toward

judgement when Eli, a young man who committed suicide, comes onto the train. Carter died young because of liver cancer. His life that was so full of promise, goals and dreams, was snuffed out before he could finish college. He didn’t choose to die and doesn’t like that option. So, yeah, his feelings are pretty understandable. However, he learns that things can hit close to home and that people sometimes have so much hurt they resort to dire measures. Would they regret those choices if given a second chance?  Would Carter actually see things differently? The book takes a look-see.

The world building was good in a book that is not quite long enough for more. It worked. I believed they were on a “ghost train.” I believed they were in the afterlife. I could believe sad ghosts were just outside the doors of the carriages. I believed that some people accepted their fate and could move on while others needed cajoling and motivation to do so.

The author touches on topics that make you think, that elicit strong emotions. Death being one, and the death of people so young. Then there’s, ‘have we done as much with our lives as we’d like?‘ Cancer, things left unsaid, friendships and how/why people can drift apart, even when they care deeply and have the best of intentions, are all touched on.

There’s also a couple of not too long but lovingly hot scenes between Carter and Seth.

“What Carter was doing to him. He moaned softly as Carter’s teeth scraped his nipple. His eyes were closed, his head thrown back and his dark hair spilled on the sheets. He was so beautiful when he gave himself over to sensation, and Carter wanted to take him a lot further than that.

For those who need to know, for the story it is – a supernatural romance – the ending is happy, if in an atypical way.

This book needed another set of eyes because it’s not without some editing issues. Things that should have been cleaned up…

“I can’t even begin to tell you how much I want to get off this train with you so I can love you the way you deserve.”

My big niggle. The ending was rushed. I actually went back twice between the last chapter and the epilogue because I thought I’d somehow missed pages. It let the book down and that is why I actually deducted a full star, the editing I could have lived with. I understand Carter will have a story of his own, but that doesn’t matter, all questions weren’t answered to my satisfaction here and I can’t say why without a major spoiler attached. I feel everything should have been covered in this book and it should have been longer to accommodate it. I absolutely loved Carter and Seth so much – their connection, love, and story. I ate it up. It’s beautiful. But the ending… It’s such a poignant part of this overall story and it’s not given enough time.

For Never and Always is a touching, loving, romantic story with characters you can believe 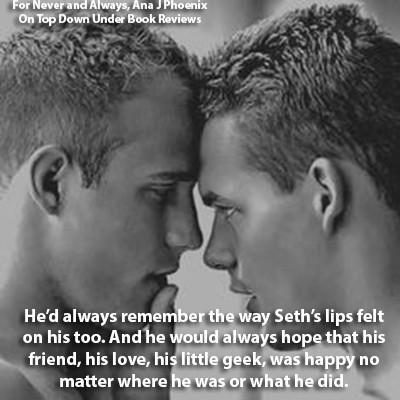 in and desperately, desperately hope things will somehow work out for. Death is a touchy topic but there is also a fascination with what comes after, for us and loved ones. This book embraced that fascination and told a hopeful and emotional tale. If you like contemporary gay romance with supernatural elements. If you can embrace all aspects of the book, including the warning. If you’re prepared to have a bit of a cry or get emotional with Carter and Seth, then I really do recommend For Never and Always. 4 Stars!

Wow, what a review! I can tell this book would rip my heart out. It looks like a really good story but I can tell I’d have the same issues that you had.

I love the pics/GIFs and quotes.

I think you’d like this book very much, Cindi. I just wish the author had written more because she did a good job with an interesting story but it needed a bit extra.

Thanks, I could have used a lot of pic/quotes because there are some very lovely and touching moments. Now to look at Ana J Phoenix’s other books.

Thank you so much for bring this incredible book to my attention Kazza, as well as the amazing review.
I have been up all night reading it straight through and if it were a paperback I would have left score marks on the pages. Cindi, Kazza is right, you’d absolutely love this book with some of the ones you’ve sent my way.
I agree with you Kazza that it could have used a bit extra but it’s written beautifully as you said and aside from ripping my heart out I could have read another 100 pages 😉

I would have loved another 100 pages too. Carter and Seth are a wonderful pairing and I wanted some more.

Yes, the book is interesting and really quite beautiful. I’m so glad you liked it, Paul 🙂

I didn’t see this book either before your review. It makes me want to pick it up and read it hard. Then Paul said how good it is too so I’m going to get it. 🙂

If this sounds like a book for you I hope you do get it Matt, because it is lovely… and Paul really did enjoy it too 🙂

This looks SO good and so heartbreaking. I love the visuals you put up. Beautiful and touching. Looks like I need tissues before I start this one.

Thanks re: the compliment of my review 🙂 It is touching and maybe get out those tissues, Alexi.

Oh I don’t like to cry in my books unless it’s pretty tears and this sounds like beautiful ones are coming . 😀

And those words when they hug in your review is so gorgeous. 😀

Then I hope the tears are pretty ones, Lee, lol. That is a gorgeous GIF and he words are beautiful. There is a lot to like about this book. Hope you enjoy it 🙂