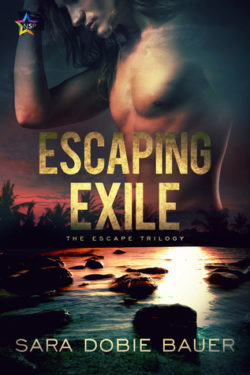 Andrew is a vampire from New Orleans, exiled to a tropical island in the 1800s as punishment for his human bloodlust. During a storm, a ship crashes off shore. After rescuing a sailor from the cannibals native to the land, Andrew becomes fascinated with his brilliant, beautiful new companion, Edmund.

Edmund is a British naturalist who has sailed the world seeking new species. Intrigued by creatures that might kill him, immortal Andrew is this scientist’s dream—but so is making his way back home. Edmund will fight to survive, even while wrapped in the arms of a monster.

As light touches and laughter turn to something much more passionate, the cannibals creep ever closer to Edmund. Can the ancient vampire keep his human alive long enough to escape exile and explore their newfound love, or will Andrew’s bloodlust seal his own doom?

I do enjoy vampires, especially if they have a darker nature. Not every book delivers the darker side. However, this novella is an intriguing mix of sweet and sour. Light and dark. It’s why Andrew found himself exiled from New Orleans by his coven leader, Michelle. 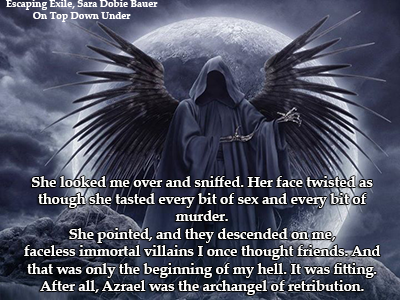 I enjoyed Andrew’s vampire scents and senses. Not the usual citrus or pine or sweet and tangy. He has a bluntness and a definite appreciation of the predatory use of his smell and other senses. I think a lot of that is borne out of being old. Really old.

With the scent of whores still clinging to me, I walked as though invisible through the masses.

Sweet gardenia and the scent of Cameron’s blood mixed in the night. 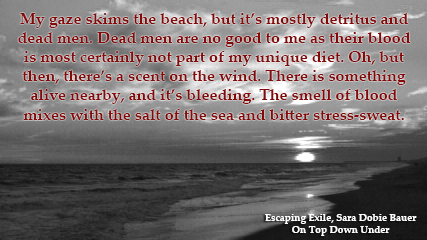 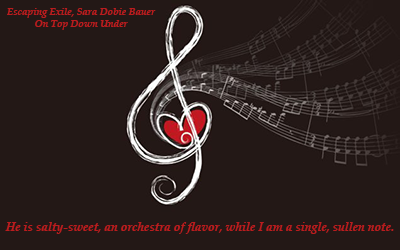 I love the use of the personal possessive mine in paranormal books. Mine is damn near essential for my enjoyment of vampire stories, particularly those with intimacy or romance in them. Here, Andrew prefaces Edmund with the word my. My Edmund. My sailor. It worked equally as well as mine.

They speak and whistle to each other, but they must be at least twenty feet away. Perhaps they fear coming any closer to the home of the dead thing that walks among them? God, I hope so. Starved of human blood, I’m weak—too weak even to defend my Edmund.

There’s a dance toward sex between the men, a build. When they’re together, well, it’s pretty darn hot.

Edmund is a naturalist. They were a special breed, those who travelled the new world in search of discoveries. He’s an interesting man. He likes risks and risky men, and he’s about to find out just how risky his new ‘find’ is. The pair make for an intriguing relationship in this quirky story.

I didn’t give this book an historical tag even though the blurb says it’s set in the 1800’s. There isn’t really any sense of time because the majority of this book is spent on an island, and while there are non-linear backstories attached to both men, the language is not particularly representative of a period either. That may change given the ending of Escaping Exile. It’s to be continued but I was happy enough with it leaving off where it did and just hope it isn’t too long for book #2.

There are questions still to be answered, some more depth to be added. For example, Felipe, someone Andrew clearly thought of as a friend, gets away with murder but I believe he is still in New Orleans and Edmund is where he is. Why? How and why does Andrew, a nightwalker, handle the sun? Because he does, and I do expect an explanation when a book deviates from the norm. These are bibs and bobs that made me give 4 stars instead of 5.

Escaping Exile is a very interesting introduction to a trilogy by a new-to-me author. If you’re like me and enjoy vampires, a little walk on the more quirky and predatory side, then I highly recommend Escaping Exile. 4 Stars!

It’s been a long time since I’ve read a good vampire book. Like you, “mine” is pretty essential for me. I also love my vamp books darker, which is strange because I used to prefer them light. This looks like a great start to a trilogy. I love the visuals and quotes, especially the last one.

Thanks, Cindi. I do love that last quote and the GIF.

‘Mine’ is so essential for vampires. I’m not a possessive person but my vampires need to be, lol.