Empathy for a Killer by Sarah Masters 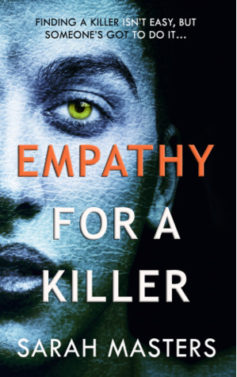 Finding a killer isn’t easy, but someone’s got to do it…

Detective Burgess Varley is called out to view a dead body. It isn’t one of the best things about his job—but putting killers away for the rest of their lives? Now that’s one of the best. Problem is, the victim has something in her mouth that has always scared Burgess—something that links him to the killer without him even knowing it. And that link is more than Burgess might be able to handle.

Detective Shaw Peters, Burgess’ partner for several years, loves Burgess in ways he perhaps shouldn’t. Or ways that Burgess won’t accept, anyway. But Shaw isn’t one to back down from a challenge, and as well as being by Burgess’ side on the hunt for a killer, he has his own mission to accomplish—getting Burgess to admit they’re meant for each other. It won’t be easy, but by God, he’s going to give it a try.

With Burgess and the killer learning things about themselves, their lives, and each other that they previously hadn’t known, life—and death—is about to become serious.

Over the course of my profession I’ve been primarily proud of three things – helping depressed and suicidal people to (re)gain stability, helping partners and families stay together where possible. If not staying together, at least finding a way out of being directionless and anguished, causing upset for all concerned, adults and children alike. I am particularly glad I’ve had the opportunity to help children who were being abused, adult children who had been abused when younger, or those who were now abusing their own children. Not everyone wants to work with you but for those who do, and there were plenty of people who worked hard with me, I could not be prouder or happier of what was accomplished. Breaking the cycle of abuse and family dysfunction is something that society needs to support in a large way, and there’s a long way to go in achieving this goal. It’s hard but worth the concerted effort. There are nowhere near enough advocates for children of violent, abusive and toxic parents and households. Not many people who genuinely help families. Having functional families – particularly nuclear, but also extended – is key to solving many problems in our local and wider communities. Our jails are full of children and adult children from dysfunctional homes. All of which leads me into Empathy for a Killer.

I’d have to say that the serial killer in this book, who is one of the MCs and has an alternating POV throughout, whose name you 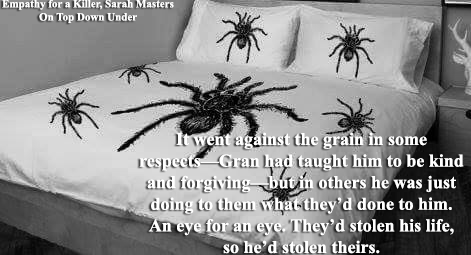 do not know for most of the book, is an incredibly sympathetic character with myriad complexities, pain and mental health issues triggered/exacerbated by environmental factors. It would be so easy for any reader to place Gordon, I’d like to use his name from the outset, in the black and white realm of a killer, a murderer, and that’s that. That’s his label. However, Sarah Masters wrote him so well it is incredibly hard to have a black and white outlook about a man who has taken away someone’s daughter, sister, friend, brother, son etc, etc as you read his horrible life story. I’m not generally a fan of flashbacks but they worked here as they tied in other necessary connections, threads, psychology.

All this time of fighting the whispering demons, of trying to be normal, and although what he had done to her and The Man had meant he’d been calm for many years, because of one simple mistake with The Man Point Two he was back to feeling like that ugly little fucker again. Back there.

There are two main arcs, the murder/suspense/thriller plot, which is very good, and the romance between Detective Inspector Burgess Varley and his police partner, Detective Sergeant Shaw Peters. Shaw has been in love with Burgess 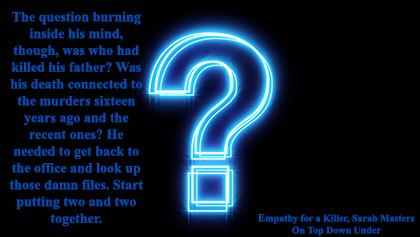 for years. They “shagged” once (it’s British) and Shaw wants more. Much more. He wants all of Burgess. At Burgess’ core he wants Shaw too. He wants and needs love and something to break down his personal intensity, but he will not allow those thoughts – caring, love – to appear at a conscious level. He will not allow it to get in the way of work, work and more work, an OCD preciseness to everything he does, including punctuality, sharp clothes, anxieties, which encompasses the fear of losing someone he loves. So. Right then. Best not to love in the first place. But Burgess, for all he sounds curmudgeonly, is a good man with a good heart. He is consumed by fear and an ingrained rigidity. The killer is not the only one with a backstory and Burgess’ past is also shown via flashbacks which, once again, works with much precision to tie in important aspects of the overall story.

There are moments of fun in this book, Burgess and his spider phobia is one. Because a spider is used as part of a murder, he uses socks as code for spiders as an ongoing theme.

The wanker that was Mr. Clarke had been more bothered about how to explain things to customers than fussed about the fact that a venomous sock was out there.

Shaw led the way down the corridor, Burgess trailing behind like the uneasy motherfucker he was. There would be socks on that footage, ones he didn’t think he’d be able to look at.

Then there is Marlene, Burgess’ best friend and co-worker, who is a dedicated romance reader with her ‘puppy’ – which is 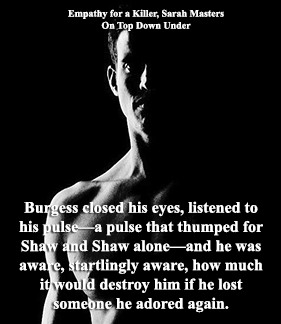 code for lover. She likes to remind Burgess that he needs to get his own ‘puppy’ – meaning Shaw. Speaking of Shaw, he is patient and kind and loyal, a bit more average in his clothing choices and storage, and not so precise in general. Things Burgess needs as a balance, Shaw brings to the (potential) relationship. Although Burgess tries to tell himself that he and Shaw are akin to the Odd Couple, something he uses as proof it will never work, he is slowly being broken down by Shaw’s loyalty, steadfastness and the genuine actions of someone who loves him unerringly. Having said this, it isn’t gushing, I don’t recall there being any sex. I mean, they did have some, but not that I remember reading about explicitly, and I couldn’t have been happier because it wasn’t required. This book is primarily about the unravelling of a current case and a couple of cold cases, the romance a nice arc interwoven into Burgess’ history and his buttoned-up emotions. Their relationship, the very definition of love, is pivotal to the story, it’s just balanced along with everything else.

“You are what I need. And one day, when you’ve vanquished the demons, as it were, you’ll be more able to loosen up. It’s a tough job being you. No offense, but I wouldn’t want to be Burgess Varley.”
“No offense taken.” And there wasn’t. He knew what Shaw meant.

For the most part the psychology in this book is pretty good and I can’t really fault it. All the characters are relatable in one way or another, and Gordon was my favourite character in a stellar bunch. I did not like what he did but I understood him, which can be unsettling to admit. It also isn’t easy for an author to write someone who kills with empathy, somehow not allowing their thoughts, their own voice and feelings to override the narrator’s. The author walked that fine line extremely well. The book’s title is perfect on multi levels.

All that did matter was the calm and well-being. Whether he spent it in prison was neither here nor there anymore. Just being happy was what he needed.

I can’t say much more about the plot because I will spoil it if I do. I worked some things out quite quickly, but you’re meant to and as the book progresses you see why. The suspense was very good, it keeps you turning the pages. You know who the killer is after a while, some of the reasons too, but you don’t have all the dots filled in, you have to keep reading for that to happen. I enjoyed seeing Burgess let Shaw in and I liked Shaw as a person as well, and Marlene is another example of an excellent female character/friend in a gay novel.

Pet peeve alert – Pride publishing/the author, can you please make sure it is universally British English used in your books set in England. It was only a couple of words but it can pull me out of a setting.

Bless authors in this genre who give me something a bit different. Also, I’ve enjoyed the last two books I’ve read and both have the same publisher in common. Maybe I need to put them on my radar more.

This is one high calibre piece of storytelling. The characters are full of depth and dimension, the standard of writing  high, the plot riveting, the story thoroughly engaging, touching, empathetic, appropriately psychological and darkish at times, with humour that made me laugh out loud on occasion. I read the book quickly and now I wish I could go back with a clean slate and start all over again. Highly recommended for lovers of murder/ suspense/thriller novels combined with a gay romance which does not have the guys jumping into bed at the most inopportune moments. Definitely more plot concentrated than steam. Great characters. Really good book. 5 stars!

I wasn’t finished reading the first paragraph of your review before I was seeing one of the reasons why you recommended this so highly to me. You know my love of thrillers. When I read books about serial killers I’m always trying to figure out WHY the person does what they do. I want to know what kind of experience (s) in their life led them to kill. I know I’d thoroughly love this book. It’s a Cindi book if I’ve ever seen one.

Great review. I can’t wait to have time to read this.

As I was reading this book all I could think was, “Cindi needed to have picked this book up because she’d love it.” I hope you do read it, even if only for you and not a review anywhere. I know how much you love true-crime along with fictional thriller suspense books. I thoroughly enjoyed this one too.

Thanks, Cindi, and go grab a copy 🙂

New author to me too. You can’t find many crime or suspense books with gay protagonists so thanks for the review. Now I’m looking forward to some suspenseful weekend reading! 🙂

I agree, Matt. It is so hard to find these kinds of books. I hope you have a great weekend of ‘suspenseful reading’ 🙂