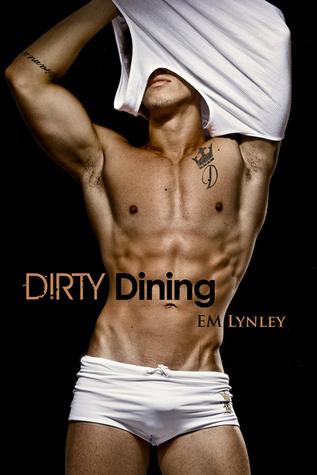 Jeremy Linden’s a PhD student researching an HIV vaccine. He’s always short of money, and when biotech startup PharmaTek reduces funding for his fellowship, he’s tempted to take a job at a men’s dining club as a serving boy. The uniforms are skimpy, and he’s expected to remove an item of clothing after each course. He can handle that, but he soon discovers there’s more on the menu here than fine cuisine. How far will he go to pay his tuition, and will money get in the way when he realizes he’s interested in more from one of his gentlemen?

Brice Martin is an attorney for a Silicon Valley venture capital firm. When he’s asked to take a client to the infamous Dinner Club, he finds himself unexpectedly turned on by the atmosphere and especially by his server, Remy. He senses there’s more to the sexy young man than meets the eye. The paradox fascinates him, and he can’t get enough of Remy.

Their relationship quickly extends beyond the club and sex. But the trust and affection they’ve worked to achieve may crumble when Jeremy discovers Brice’s VC firm is the one that pulled the plug on PharmaTek—and Jeremy’s research grant.

Dirty Dining was recommended to me several times and I always meant to get around to reading it. It just took some time. I’m so glad I finally did get around to it. This book is sexy, and sweet and I really, really liked it!

I was a little nervous starting this book because the idea of MC’s having sex with people who aren’t their love interests can be off-putting for me. But it didn’t bother me here. Besides, there was no penetration and the MC’s weren’t together at the time. So it didn’t really take from my enjoyment of the story.

I loved both MC’s. Brice is a lawyer and Jeremy is a grad student. Apart from one moment, which I will come back to, they were both extremely likable and I found myself rooting for both guys.

Brice and Jeremy have such awesome chemistry. They worked really well together and I loved seeing them grow and spend more time together. They were also extremely hot and I loved how sexy some of their scenes were. But there was an emotional side to the story, too. There were some lovely moments between the guys that just made this story really good for me.

I loved Kit and Law, two of the guys at the Dinner Club. Kit stole every scene he was in and Law was a real sweetheart.

The moment the drama between Jeremy and Brice was added was the moment I got really annoyed with Jeremy. He overreacted in a major way, which annoyed me so much. But things worked out because Jeremy was able to apologize and Brice was able to admit his mistakes. It was great to see because I definitely thought Jeremy especially needed to make things right.

The ending was great. I did get a little annoyed with what was going down, but that was short lived and I was grinning like an idiot in the end. It was just a really sweet ending for a really great couple.

I would definitely recommend this book if you want a nice, sexy read. It left me with a huge smile on my face.

This looks like a nice and sexy read, Trisha.

It’s definitely both of those things. I really liked it. 🙂

Thanks, Kazza! It is!

And yes, the cover is perfect for the story! 😀