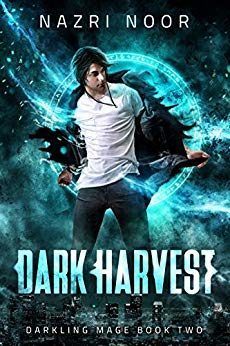 The darkling mage has found himself in the company of scoundrels. Maybe that’s what Dustin deserves: a werewolf, a vampire, and a talking sword for teammates, and a rogue sorcerer as his mentor and master.

But a doomsday cult has surfaced. Twelve mutilated bodies are found drowned in blood and in wine. The massacre stinks of both the divine and the supernatural. Worst of all, an ancient god sends Dust on a lethal mission, one he must complete in three days. The reward? He gets to live. Well… maybe.
​
​If you like snarky heroes, snappy dialogue, and a bit of grit and gore, you’ll love the second book in Nazri Noor’s series of urban fantasy novels. Explore the Darkling Mage universe and discover Dark Harvest today.

**SPOILER IF YOU HAVEN’T READ AT LEAST BOOK #1, SHADOW MAGIC**

A few months along from the end of Shadow Magic, Dustin Graves is settling into his new job and living arrangements with his boss, the enigmatic Carver, and fellow arcane underground dwellers, Gil, werewolf, and Sterling, vampire. Their hideout is a niche space carved out of alt-reality somewhere behind Mama Rosa’s restaurant in Valero, California. You know, as you do.

Dustin’s latest assignment is to find the Chalice of Plenty, a magical cup that can produce any potable liquid in copious quantities. If something sounds too good to be true then it usually is, and the Chalice is no different. When Dustin turns up to his assignment at a party of ‘norms,’ one reminiscent of a Roman bacchanalia, it’s gone all kinds of horribly wrong. There are twelve people dead in some sort of frenzied, bloody manner and one incoherent and bloodthirsty human left. Once Dustin grabs the Chalice, bringing it back to Carver, Carver knows who the entity behind the cup is. Dionysus.

Now Dustin has to find and meet with Dionysus, and Dionysus is a bit tricky. He won’t just allow anyone into the VIP area of his club. Dustin gets invited in because he has the right magic needed to find another arcane oddity – the Genesis

Codex. There is added incentive for Dustin to do the job as he, quite ironically, drinks from a poisoned chalice and finds himself with three days to get the job done and stay alive – although alive is relative given how Dustin is where he is. I felt like this was a very Snake Plissken, Plutoxin-7 moment, which I applaud. I do love the ‘Escape From’ movies. Instead of the countdown clock, Dustin has a tattoo with petals that wither and disappear as time passes, making him acutely aware of what time he has left.

In the series prequel, Penumbra, and book #1, Shadow Magic, Dustin went from a regular human to a magical shadowstepper working for the Lorica, to then working for Carver. I wondered how the people Dustin got to know during his time at the Lorica would be able to remain part of the series. I shouldn’t have wondered, the main players remain entwined because it seems that whatever Carver is after, arcane relics or artefacts, so is the Lorica. In this instalment a new group of cultists, the Viridian Dawn, join in. Prudence and Bastion, Herald and Romira all make appearances on behalf of the Lorica. Even when they are competing for the same objects, like the Chalice and the Codex, they make time for brunch. Team Carver and Team Lorica have a frenemies approach to artefacts and oddities. The Lorica sees itself as the upright and moral keeper of magic and the arcane, and pays a lot of respect to the Veil, which keeps all us grub-schlub humans unaware of magic, gods, and the arcane parallel world. Carver would prefer not to worry about the Veil but he likes to avoid the Lorica and norms on the jobs that he wants done so he, mostly, works within requirements. The Viridian Dawn don’t give a damn about norm casualties or knowledge of their world, the Veil means nothing to them. Three different attitudes and approaches to the same pieces and the overall world should make for some unique differences of, uh, opinion in the next books.

The world building and action ratchetted up some more in the well named Dark Harvest. Nazri Noor is getting right

into his world and value-adding to it all the time. The various gods encountered are always intriguing and vividly written. This time Dionysus and Amaterasu are the primary entities. However, Hecate and Arachne both make cameos.  These gods are feisty and testy and pretty true to the egotistical, powerful beings they are purported to be. Dustin and the gods clash for various reasons but they also give him more snippets of information about himself and push boundaries, good or bad. For all of Dustin’s feelings of pissing entities off, they seem to take a personal interest in him. Mind you, Amaterasu was a tad stroppy.

A new recruit, Asher, chooses to join Team Carver over Team Lorica. So in addition to whoever and whatever Carver is, plus a mage, a vampire, and a werewolf, they now have Asher, a necromancer. Things are getting interesting in Underground Arcane-Landia.

Vanitas has such a small role in this book it disappointed me. It’s weird to say you enjoy a telepathic sword, but I really do. He was mostly absent and then I had my heart stomped on. Whyyyy?!?!

The trade mark fun of the series is also evident throughout where characters take a dig, even in battle, between  factions and the entities, it’s like most things are never too serious.

“I’m going to see some friends tomorrow.”
Sterling smirked. “Huh. I didn’t realize you had any friends.”
“Die in a fire,” I said, through my most winning smile.
“Can’t,” Sterling said. “Already dead.”

The reason these books get 4 instead of 5 stars is that I can’t quite gel with Dustin. I don’t dislike him but I just don’t love him. I’m desperately stuck in the middle and I need to feel some more emotional connection to him. For me, it’s like there’s a wall he, or I – one of us – can’t quite knock down. He’s busy telling you he’s handsome and fabulous but it’s like he really doesn’t believe it and therefore he’s faking it ’til he makes it. I understand, he’s battling feelings of inadequacy when it comes to something new, in this case magic, defensive magic in particular, and he has to deal with a lot of needling about it, but that’s not it. It’s that personal connection I’m missing. That’s my take, and you have to bear in mind that while I’m looking for other strong elements to any book I read, characters always reign supreme for me. Always. But I do suspect when he comes into more power or more of a direction Dustin will grab me with both hands. I look forward to it. At the moment he is teetering on the brink of a lot of things and I’m teetering with him.

The characters I am into in a big way include Vanitas, again, whyyyy?!, Arachne (a whole lot) and Hecate. I’m also very interested in Carver, there is enough right now in relation to him to be make him highly intriguing. Gil is fine, but the Lorica crew I’m also struggling with somewhat because they can be a bit annoying. Prudence and Herald have sticks up their arses, and Bastion is infuriating. Bastion and Dustin in the same space aggravate me. Dear. Lord. They talk to each other in a 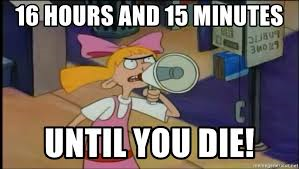 childish manner. Sterling and Dustin on the other hand? They make me laugh when they banter. That’s when Dustin is engaging me more. I do rather like Sterling. A lot. I’m also a sucker for a vampire. His whole – so, you’ve only got three days left to live, huh? Want me to turn you? You bummed about the petals dropping off the Dionysus tattoo and bringing you nearer to death? Let’s talk vampirism? Only one day to go? Let me bring you over to vampire. It’s awesome. Dustin always refuses, you’re boring, Dustin, but Sterling persists with it and I appreciate both his snark and passion. That he squicked Dustin out about blood? Yep, total appreciation of Sterling. He’s the Helga Pataki of Team Carver.

In the well named Dark Harvest the world building continues to be good, tying in with Dionysus as the primary

entity beautifully. All the different entities are still bringing their A game, like Amaterasu, and add something strong and purposeful each time. The author connects them to each story well and with such relatable detail that they contribute much to the series primary arc and the MC’s direction. The action is on point and more characters are joining the series in a way that is progressive without overwhelming the reader. Dustin’s search for his father continues and I feel that will be far more than he bargained for.

Previous post
Double or Nothing, Cari Z & L A Witt
Next post
Blog Tour: In This Iron Ground, Marina Vivancos

I remember your enjoyment of Shadow Magic so I’m not surprised this one worked for you as well. Good world building is so important. I understand completely what you’re saying about Dustin. I get emotionally connected to characters as I read their stories.

This looks like a good addition to the series. Great review.

Good world building is essential in UF and this series does a good job of that. I have a great need to connect with characters because I live through them.
Yes, it’s definitely another good book in the series. Bring on book #3.