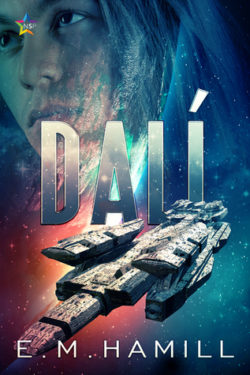 Dalí Tamareia has everything—a young family and a promising career as an Ambassador in the Sol Fed Diplomatic Corps. Dalí’s path as a peacemaker seems clear, but when their loved ones are killed in a terrorist attack, grief sends the genderfluid changeling into a spiral of self-destruction.

Fragile Sol Fed balances on the brink of war with a plundering alien race. Their skills with galactic relations are desperately needed to broker a protective alliance, but in mourning, Dalí no longer cares, seeking oblivion at the bottom of a bottle, in the arms of a faceless lover, or at the end of a knife.

The New Puritan Movement is rising to power within the government, preaching strict genetic counseling and galactic isolation to ensure survival of the endangered human race. Third gender citizens like Dalí don’t fit the mold of this perfect plan, and the NPM will stop at nothing to make their vision become reality. When Dalí stumbles into a plot threatening changelings like them, a shadow organization called the Penumbra recruits them for a rescue mission full of danger, sex, and intrigue, giving Dalí purpose again.

Risky liaisons with a sexy, charismatic pirate lord could be Dalí’s undoing—and the only way to prevent another deadly act of domestic terrorism.

Ambassador Dali Tamareia is on bereavement leave after the loss of their husband and wife, Gresh and Sida, as well as their unborn child, to a bot bombing six months ago at Luna Terminal. Grief and survivors guilt have driven Dali to be hurt, angry and self-destructive. Dali doubts their future. Doubts their role as an ambassador when humans, and a few other close species like the Nos, do not accept those who are gender neutral/third-gender changelings. The intolerance was what killed Dali’s loved ones and, by pure chance, missed killing Dali as well. Gresh was a passionate human rights lawyer, Sida a research geneticist with significant findings disputing the NPM’s biased and bigoted gender science.

Journalist Kiran Singh, once considered a friend but who encroached on Dali in grief, approaches Dali to rally against the NPM, New Puritanical Movement, and President Batterson. Dali isn’t much interested in life at this point, so they’re definitely not interested in Singh or their ideas of fighting the government and it’s supporters when Dali is still so raw from their life being torn apart.

In the beginning Dali is living on Rosetta Station, which is reminiscent of Babylon 5, where their father is the Captain. One night, when it all becomes too much, Dali goes to the Labyrinth, the seedy underbelly of the station, putting themselves deliberately in harms way, getting beaten and stabbed within an inch of their life. However, when Dali is near comatose they see Sida and Gresh clearly. It’s like they’re spurring Dali on to continue their work. Dali has a change of heart about dying, now wanting to continue the legacy of their partners.

Not only are the murderers of Dali’s family still unknown and free, while Dali is on board a starliner to Zereid with their crechemate (blood brother) Gor, the ship is attacked by Nos Conglomerate pirates. What Dali discovers leads them closer to how their partners died. Changelings have also begun disappearing and Dali needs to know why. Pro-procreation and anti third-gender/changeling voices of President Batterson of Sol Fed and the NPM are becoming louder, fanning more vitriol. The book mirrors the current conservative political climate, so while it’s set firmly in space with excellent futuristic would building throughout, the politics are definitely contemporary and resonate more strongly because of it.

Long story short, because Dali is a third-gender changeling they make a decision to go undercover after discussions with Rion Sumner, a member of the covert Penumbra group. Dali ends up on an Ursetu mercenary’s space station where illegal goods are bought and sold at the roaming Shontavian Market. The goods for sale includes ‘live cargo’. There are two other changelings with Dali, Kai and Dru, who survive the time in suspension and the ill treatment by the Nos pirates before being handed over to the captain. Quite a bit of this book is spent on Rhix’s ship where Dali’s former career helps, as does their natural empath abilities and the art of Zezjna – a meditative, spiritual and martial arts mix –  something learned during fifteen years spent off world on Zereid when they were growing up. Dali also finds a friend in Simish, a servant to the Ursetu, and Lord Rhix. Simish is an actual alien race but, for simplicities sake, the servant Dali deals with is always called Simish.

“I’m aware something’s wrong. Can I help him?”
He pressed the edges of the cut together and sealed the wound with a dermal accelerant. “I don’t see how. But if you could, we Simish would be grateful. Our Lord Rhix may possess a volatile temper, but he is less a barbarian than the others. Things are much more pleasant when one’s family isn’t being fed to the Shontavians.”

There is so much to enjoy about Dali. It’s a well written piece of sci-fi. There is strong world building and different lifeforms/cultures/aliens. There are differences in space stations. Different alliances. There are valuable empath abilities of some and a distinct lack of empathy by others, particularly humans. You feel like you are in space and you feel like you are sometime in the future, so there is a great sense of time and place throughout.

It was Sol Fed business, and for the sake of formality, I’d file my report in the Embassy as well. But something told me it could disappear from government files. An encrypted holo card lay secreted in my private belongings. I had no illusions it would be easy to take down the Goliath that was Batterson Robotics. It would require one hell of a slingshot—and some pretty big fucking stones.

Dali’s androgyny and neutral default gender, their changeling abilities, were drawn vividly. Lord Rhix was also very clear, flaws and all. Ouros, the main Shontavian, was something else. I’d like to meet up with him again, but not in real life, only via the safety of a book. Shontavians like a live meal, and humans are on that diet. Oath-breakers are especially tasty. Yet their need to see the stars was so fundamentally… innocent and random it won me over, as did the unusual relationship Ouros formed with Dali. Then there is the kindest, most empathetic soul of all: Gor.

I went back and reread about a third of this book because the first time I was absorbed in names, species, politics, intrigue, and Dali got lost somewhere in the noise. Second time’s a charm, as I felt more in touch with their grief and their kind and brave actions. I’m looking forward to when Dali isn’t so raw, because at times the diplomat and the grieving Dali could be at arm’s length. Others came first and Dali is, in actuality, still trying to find themselves and their purpose in the face of their loss. It was pointed out to Dali, after their beating on Rosetta Station, that Dali tends to look out for other’s needs at their own expense. Dru noticed the same thing when they were held together in captivity on Lord Rhix’s ship. As much as Dali was there to save them it’s Dali’s natural default setting to put others first.

“You’re not responsible for us. You’re not some kind of knight coming to save us. You’re a victim, just like we are.”
She thought it was my way of coping with our captivity—except, I was here to rescue them. That was the point of the whole goddamned mission. But I was exhausted and so tired of this masquerade.

I hope some of the others in this book are back again and that there’s another book in the offering in this world because, while this is quite a satisfactory ending if this is where it ends, there are threads still waiting to be weaved together. Plenty still to be done.

Dali is a very well written, fully fleshed out sci-fi book that isn’t a romance, outside of the (understandable) love Dali still holds onto for Gresh, Sida and their child, who are sadly lost to them. But there is sex. It wasn’t really expected, to be honest, but it does fit the big-picture story being told. There is strong world building and strong sci-fi elements – space stations, planets, aliens, federations, alliances, languages, technology, big business, trafficking, an interesting look at futuristic gender and how a third-gender changeling can quite quickly shift from neutral to secondary physical characteristics of female or male to suit themselves, an event, or hormonal shifts. There’s also action, intelligence, sympathetic characters butting up against those who are ideologically biased and zealous. Dali shows there is more to being human and humanity than just being part of a collective race. Good reading. 4.5 Stars!

This sounds confusing, probably because of all the different names and words and species? Brain fog makes understanding books like this hard sometimes. But it sounds interesting! And the third gender changeling part sounds cool. You’ve been reviewing more my types of books lately, it seems.

At the best of times I make things more complicated for myself by analysing every name and who fits where and why, finding any and every connection I can. I’ve been sick for about 7 weeks and my mind is… messy right now, so if the book sounds confusing, I added to 99% of that. The third-gender/changeling aspects of Dali themselves were interesting in the way they were written, and gender was handled well. I’ve been looking for a mix of books lately, more paranormal, which is my first love, fantasy, spec-fic, in this case sci-fi, although sci-fi is not… Read more »

Oh no! I’m sorry you’ve been sick for so long, I hope you get better soon <3

This looks like an interesting story. I usually steer clear of all things sci-fi and with religious themes but this looks like a nice read. Great review, Kazza. I love the visuals and quotes.