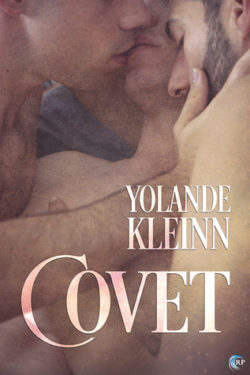 Jack Mason—graphic designer and unrepentant player—has never been interested in monogamy. He certainly isn’t looking for romance when he meets Professor Colin Sloan.

Newly single and not looking for anything serious, Colin is intrigued by Jack’s offer of a physical affair with no strings attached. Becoming friends wasn’t part of the plan, but as accidents go, this one’s pretty great.

Peter Mason is Jack’s identical twin. In a long-term relationship himself, Peter tells no one that he’s falling for his brother’s newest favorite, even as the secret creates tension with his girlfriend.

When Peter’s relationship falls apart, he seduces Colin, fully expecting Jack to forgive his transgression. But Jack is keeping secrets too—he hasn’t told even Colin that he’s fallen in love. Suddenly the twins are feuding, and Colin is caught in the middle, blindsided by the revelation that he doesn’t want to choose between them.

Now all three must find a way to share, or they’ll tear each other apart.

I’ll start this review by saying that I nearly DNF this book. The telling, telling, telling in the first 12-15% drove me to distraction. Then it settled down into a better rhythm and I became interested in the characters, it was like a wall came down. I’m adding this so that if you feel the same maybe it will help you hang in there.

Jack and Colin meet at a university fundraiser, Jack is attracted to Colin, an English professor. Jack subtly flirts and uses his charm, which leads to them going out as friends. When Jack and Colin eventually have sex, because it was always about Jack seducing Colin, and Colin says he’s not available for a relationship, Jack tells him that suits him perfectly. Jack’s only ever interested in casual and open and now he’d like them to remain friends with benefits. Colin’s three months out of a five year relationship and wants to work through his feelings about Kyle so he agrees. Jack continues to hook up with other men and at any point he seems to have three guys in tow. However, Colin is still around and sees no one else, but that is firmly his choice. Colin has previously only ever been monogamous so this fuck buddy relationship, and being comfortable in it, is a new development for him.

Peter, Jack’s twin, is an attorney and Maureen, or Mo, is his girlfriend. They’ve been going out for three years and now Mo wants them to go past keys to one another’s apartments to moving in together. Peter loves her, she’s beautiful, smart and kind, but he’s balking. Part of this balking is because he is far too interested in Jack and Colin. Peter can’t help but wonder why Colin is still in Jack’s life for a month, at first, then months. Jack never stays with anyone for more than a couple of weeks. What makes the professor so special? In the process of his wonderings about Jack and Colin he ends up being friends with Colin – they meet up for a coffee here or a drink there and they chat.

Peter likes the idea of having Colin as a friend, he likes to ask more personal questions about his close but seemingly nonchalant twin. Peter isn’t like Jack in that he does do monogamy and he’s only had a few bed partners in his life. Pete is also bi, and while he doesn’t have many notches on his sexual belt, he had a relationship with a guy in college before Mo. While Peter hangs out with Colin, initially out of a perverse fascination, he feels incredibly at ease with the man. That Jack seems more than a little interested in Colin, even though Jack denies any feelings other than fuck buddies, Peter finds himself falling for Colin as well. Is it a familial twin connection that makes him feel like he’s known Colin for longer? That he is now dreaming about him?

“Colin. Sweetheart. You need to choose. I don’t even know these guys, and I can tell you’re killing them.”

I actually liked Mo a great deal and it was sad that Peter decided that he needed to be with Colin. As much as I liked Colin I’m still not sure why the brothers were so consumed by him. Part of that lack of understanding is because the book is insular, set mostly within one of the character’s heads or at Peter’s, Jack’s and occasionally at Colin’s place. Mostly for sex. There is no particular real life settings going on. Nothing much about work, except for the rare discussion between Colin and his best friend and colleague, Riley. Eventually she pushed Colin enough for him to open up, to come to a conclusion that he liked both brothers and didn’t want to make a decision or give either up, no matter how unconventional. Kyle, Colin’s ex, made an appearance and “created” the desire for Jack to want exclusivity – in a rather Neanderthal way. Truly, Colin, Jack or Peter never really seemed to go to work and it was only chat about someone not being with the others because of work that made you think they did, in fact, work. So this book is totally set within a relationship, fuck, and inner monologue bubble.

The sex was hot in the book, it’s pretty spicy, especially when Jack stopped brooding over Peter and Colin hooking

up and an acceptance was reached. Definitely hot. The drama between the twins over Colin was frustrating and I especially wanted to slap Jack. The book takes a while to hit full-on erotic heights but once it’s there the sex is plentiful, especially toward the latter part of the book. For me, there are limitations in any ménage when two of the people involved can’t touch. I don’t know how Colin is going to keep up with brothers that only fuck him. But where there’s a will…. That’s where a true three-way is better and, hey, if that involves brocest then I’m not knocking that in my fiction. I would have preferred this book to be twincest, to be honest.

Every main character had a chance to annoy me – and they took it. The all gave me something to sigh over. It was selfish of Jack to be so possessive when he’d been seeing and fucking other guys – both in regards to Colin and Peter. He never mentioned exclusivity, as a matter of fact, he expressly mentioned an open arrangement.

Jack wasn’t looking at Colin, though. He was glaring daggers at the tall, very interested man on Colin’s other side. “Leave,” Jack ordered the man, setting a deliberate hand at the back of Colin’s neck.

Peter didn’t handle things with Mo at all well, she deserved much better – breaking up and sleeping with someone else within hours is tacky. Colin needed to step in when the twins weren’t talking, he had to take some responsibility there.

“You don’t react like that when Peter touches me.”
Jack stilled for a moment, but this was a conclusion he’d already reached for himself. “You’re right.” He tucked Colin closer along his side. “I don’t.” Such simple words. So why did Jack feel like this was the most significant conversation he and Colin had ever had?

Overall, Covet is a really easy reading ménage. I like ménage books and haven’t read one in a while, so that was good. The pages flew past quickly. I may have started off shakily with the book but I became engaged. I was also intrigued how it would come together and end. There was a little bit of drama, not much but enough to add something extra. I was happy enough with the outcomes, and the author did push the boundaries of only Colin touching the twins, but not much. If twincest bothers you I think you’ll be perfectly fine reading Covet because this book makes sure Jack and Peter declare this is not about them. 3.75 Stars!

This looks like a nice story but I have feeling I’d have problems with Jack, and really, the relationship as a whole. I don’t know that I’ve read a ménage book involving twins where the brothers weren’t actively involved in ALL aspects of the sexual relationship.

Well, added to the psychologically obsessive, twisted and dark books I enjoy so much, I’m also reminded how much I enjoy brocest or twincest, so I was disappointed it wasn’t in this one – but there is one moment in the book that kind of skirts the line but not much. I miss Twin Ties… daydreaming… Covet was easy reading and by and large enjoyable, and I think I needed that.

That GIF is a bit speedy, lol