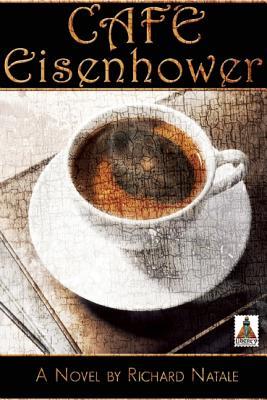 In the early 1990s, soon after the fall of the Iron Curtain, Matthew Robins, who is grieving the sudden loss of his lover, travels to Eastern Europe to claim an inheritance from a great-uncle. He discovers a world that is strange and oddly compelling. After facilitating a romance between his new friend Olga and her beloved Nina, he becomes smitten with a young local. At Olga’s urging, he uses part of his inheritance to open a gay café, runs afoul of the local authorities, and has to be rescued by his estranged brother. But perhaps his most startling and moving discovery is a series of journals in his uncle’s apartment, a thinly-veiled fictional account of a lifelong love affair between two men, a romance that survives war, genocide, and decades of Soviet repression.

Café Eisenhower is an extension of a short novella I once read and reviewed called Refrigeration Blues. Refrigeration Blues looked at Matthew Robins’  reaction after the death of his lover, Nathaniel. It was complicated, Nathaniel was Matt’s older brother’s best friend in high. They ended up together when Matt was completing university and Nathaniel had come out of the closet after a failed marriage. Together for eight years, they lived through the initial  devastating wave of the 80’s HIV/AIDS epidemic only for Nathaniel to die on the sport field. Nathaniel’s death leads Matt to contemplate suicide, he has it planned, but he was never going to end up as part of a death by Digby (refrigerator.) As he is dealing with life after Nathaniel a letter arrives from Eastern Europe. It’s addressed to his mother, who died a decade before, bequeathing an estate to any family member(s) left. Ben, Matt’s oldest brother is a successful lawyer with his latest peroxide blonde girlfriend, so he’s not interested in anything existing in some former Eastern Bloc country. But Mat is, he needs an escape from his life on Long Island and Nathaniel’s constant memory. He puts his teaching position on hold for a while and heads off.

I had left the comforts of home, wrenching myself away from anything that might remind me of Nathaniel, all in the vague hope of shocking my system out of its woeful torpor.

Café Eisenhower basically follows Matt’s journeys to whatever country it is – it’s never named, much to my chagrin – and the beige and unusual (by American/Western standards) lifestyle and the people he encounters there. It’s the 90’s, the Berlin Wall is down, and Glasnost and Perestroika are having a knock-on effect on former Eastern Bloc countries, which is where he is. So this is the timeframe and backdrop for Café Eisenhower. Through Matt’s eyes, and those he interacts with, there are many amused looks at the fare – indigestible meat pies and tasteless stew included – the terrible gay nightlife, a prevailing wariness of authority, foreigners, Jewish people – skinheads make appearances – and a corrupt system.

A moderately rational person would have opted for a sunny Greek island where he could sip ouzo and dance around and break plates. Instead I had ventured to the world capital of institutionalized melancholia to spend the better part of each day confined to a small apartment subsisting on indigestible meat pies and listening repeatedly to Satchmo’s “When It’s Sleepy Time Down South.”

But change is inevitable and starting to make an appearance in Matt’s town in the old country.

On top of his getting settled in, there’s the elderly couple who live downstairs in the building Matt has inherited, 222 Dretzka, and the rundown commercial building next door that is part of the estate, complete with  photos of Dwight D Eisenhower. Apparently it was once a meeting place/club his uncle ran that the Russian police closed down fearing political dissent.  After his initial culture shock at being in a very different world, meeting a uni student-cum-translator, Olga, who can help him with the legal documents, Matt eventually comes to the conclusion that he would like to make the building into a café that is gay friendly. Hence the title of the book, Café Eisenhower. The fact that Olga finds note books with an interesting serialised story that could be about Matt’s Uncle Leonard helps him decide to stay for a while longer as well.

The best parts of Café Eisenhower are Matt’s dramatic ideas of suicide that could be maudlin but are full of humour laced with a very understandable coexisting sadness. His best friend back home, Caroline, is a good friend who is caring but to the point. Olga, the translator, and her love of the dour Nina, who works at a local restaurant in the no-name town, is amusing and shows progression of the people and times as well. There are, of course, the journals they find of Matt’s Uncle Leonard which are divided into different books and time frames covering pre and post-Nazi era and WWII. Are they about Uncle Leonard and his mysterious tenants in the flat underneath at 222 Dretzka?  Who are Isaac and Tonio? Are they Leonard and Peter the old man from downstairs? Are they simply one man’s fantasy?

On the way I told them about Viktor, the café and my theory about Peter’s “friendship” with Uncle Leonard, aka Tonio and Isaac.
“Is possible,” Olga conceded. “If true, it is a sad story.”
Nina, as expected, was sceptical. She preferred to view the notebooks as wish fulfilment, the suggestions being that young boys didn’t do things like that back in the day.
“You’re right. You and Olga discovered gay sex.” I snorted.

Café Eisenhower had too much going on and I’ve missed a lot in this review. What that did was make the intimate relationships in this book more at arms length when they had the makings of being something really beautiful. While one relationship was cut short through death, the other was a story of  enduring but very difficult love. While both are obviously an integral part of the book, they do come off somewhat more distant than I would have liked.

And Matt could come across as snobby at times.

“Just out of curiosity,” I ventured, “what’s your favourite movie?”
“That’s easy. Caddyshack. Cracks me up every time.”
“Wow. You’re a regular Pauline Kael.”

I also found the amount of comparisons to characters in books, movies, musicals, theatre was OTT. Some are witty and smart and then it just became overkill. Perhaps I am simply plebeian and the fault lies with me. My overall rating takes these things into account, however.
…

Apart from some niggles there is nice writing in Café Eisenhower, you only need look at a few of the quotes I’ve used to see the quality. There is also a pretty engaging tale set in an interesting place at a fascinating time. And there are some colourful characters – Olga, Nina, Caroline, Ben, Janusz, Steam Room Walter, the list goes on – who fill out the pages well. Matt’s discussions  with his deceased lover at the diner are charming, I think every one of us who has lost a soul mate or loved one would be able to identify.

There’s a lot to like about Café Eisenhower. There is no doubt that Richard Natale is a clever, educated, mature (gay) man who injects a lot of experience and, I believe, himself into the book. It looks at same-sex attraction with a pragmatic outlook for the periods covered and people’s reactions/behaviour, including some factual events built around change and loss. The loss of loved ones, whether due to HIV/AIDS, a sporting accident, internment camps, breast cancer, or separation during the war, had a profound impact; and two different stories and sets of characters – Matt and Nathaniel and Isaac and Tonio – attempts to highlight this. There is also much humour and reflection in Café Eisenhower, and serious matters or subjects, while respected, aren’t dealt with via a heavy hand. Matt’s look at another culture that was coming out from behind the Iron Curtain was interesting. The culture shock was clear for someone from Long Island to former Eastern Bloc Europe, circa 1990’s. Overall, this is very interesting reading, and if you are happy to read LGBT books about relationships that aren’t classified as romantic MM fare, then I recommend Café Eisenhower. 4 Stars!

I remember all the things from that time period well. I’m sure I’d enjoy this.

Come on, I’m sure you were but a wee baby at this time 😀

But, of course! I meant to say I learned about this era in my history classes. *snort*