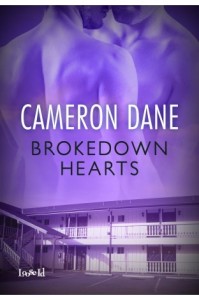 The Dedication – To acceptance and second chances. To those who need them and those who offer both with open hearts. I hope you enjoy David and Ben – CD.

I think the dedication is so heartfelt and I believe David and Ben succeeded in what Cameron Dane was wanting to achieve.

David Joyner has just been released after serving five years for stalking and threatening a man – eighteen months in psyche eval and then the rest of the term in minimum security jail. He’s seen therapists and worked through a lot of his  issues.  His sister-in-law, Brittany, and brother, Travis, come to pick him up. David is feeling sick and on edge but Brittany is nothing if not loving and supportive. She visited him in jail and now has a job lined up for David at the local animal shelter back in Coleman. She misses her immediate family and David has always been supportive of her. Travis plays the part of a caring brother in front of Brittany but when alone he lets David know he can’t stand him. He wants David away from Britanny without letting on he’s threatened him. So David gets a room in a local fleabag motel.

Ben Evans works for Skye Investigations and likes his job. He likes it so much that he is a workaholic. He’s currently based in Tampa but his bosses tell him they are looking at setting up an office in Miami which Ben will probably head up. First, though, he has to prove to them he can take time off and come back with a more balanced perspective. While on (forced) holidays his ex, Braden, (books #1 and 2) asks him if he will take a case on the quiet. An acquaintance, Jonah, wants David followed – David stalked and threatened Christian, Jonah’s partner, then tried to commit suicide hence the incarceration. Jonah is worried that David is back in Coleman to start harassing/stalking Christian again. It’s an understandable fear.

After tailing David, and sometimes nodding at him in the motel they are both staying at, Ben concludes he is no threat to anyone. David is rather sad, timid and having a tough time. He is also working hard at the animal shelter, but Ben always goes by the facts in front of him, and the facts are that Christian’s ex is back in his old town,  David is a job and Ben has to be analytical. However, David and Ben are ‘formally’ introduced when Ben nearly hits David as he runs onto the road to save a kitten. Ben already likes David, not something he wants to admit, as he can’t help feel for this scared, beaten-down guy who everyone seems to hate. Now David is risking life and limb for a kitten. David brings out a huge (over) protective streak in Ben.

Meanwhile, David is working hard on apologising, unsuccessfully, to people he has hurt. He also uses techniques to remind him to stay focused on his job and not to fixate on men. He is battling worry that his feelings of desire for the rugged, black-haired Ben could be his undoing…again. The gorgeous Ben couldn’t be interested in him –

Sexual desires without foundation or reciprocation were dangerous for him. Even the smallest submission to these needs would crack open a door that should stay firmly closed inside him.

So, David battles feelings for Ben, and Ben is doing the same for David. But, of course, they can’t stay away from each other for too long and I must say that when they come together initially, Ben pushes David to be more involved than he is  prepared for. David was closeted until he attacked Christian and himself previously and even now he struggles openly admitting his sexuality and the consequences he feels have occurred because he is gay. 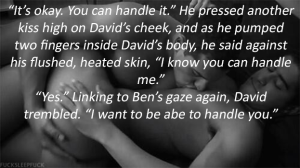 The story is definitely one of second chances. David loves his work at the animal shelter. They give him a chance and grow to believe in him there. He gains a cute kitten, Elsa, and is falling for Ben, someone who it seems reciprocates his feelings. David also has a good relationship with his sister-in-law, and Christian is very forgiving, true to his nature. Likewise, Ben is finding his nature is accepted by David, David grows and gives him a safe harbour when he needs it and the ability to be him. Work, while still important, takes a back seat for Ben and he handles things with Mika, his step-brother, well. The sex is undeniably hot, intense and goes on for days. I also honestly believe that Ben gives David sexual options – to opt in or out – 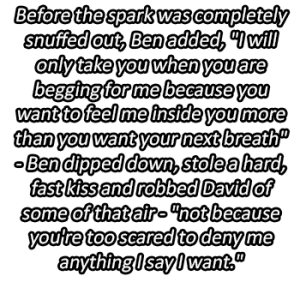 Okay, lets get them out of the way. This book is too long, there are things that could have been cut and it would have read just that bit better. It is busy – the step brother, the trips to Sweden, some repetitive introspection, the bad guy, the kidnapping, Sam behaving a certain way and flip-flopping, Travis, the notes… Just a couple of these things would have been fine. The rest needed a big red line through them.

What Worked For Me:

I think that Brokedown Hearts is beautifully named – David and Ben are broken in their own, individual ways. David is so flattened, sad, and guilt-ridden by life and what he has done, by the hate rolling off more than a few people in Coleman, family included. He desperately needed redemption and someone to see him, love him, help support him and let him know he’s worth a second chance. Being at such a low that you try to commit suicide is not a nice place to be and I really felt for David from the get-go in Brokedown Hearts. If you had told me I would have liked David after events in A Fostered Love, I honestly don’t think I could have seen it happening; yet here we get to see inside his mind and his heart and I wanted to hug him and not let go. I thought he was a beautiful, lost soul who worked so hard to be better and atone. 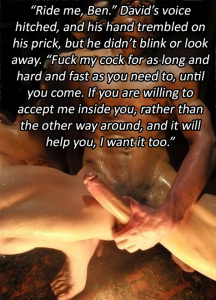 Ben. He needed to have someone understand his sexually aggressive nature and his desire to completely dominate emotionally, to take control of his partner, and his worries about hurting them physically – being so dominant and aggressive. He is also a rescuer who gets off sexually on that aspect of a relationship. Yes, there are some moments that push past sexual niceties in the beginning of their relationship – some say dub-con – that pass very quickly and have a lot to do with Ben’s darker needs. As you read more, you realise Ben wants to help David come to grips with his  sexuality and his fears about that. David needs a push and Ben pushes. At first it was rough around the edges. Ben also allows himself to be topped and isn’t that is all kinds of sexy.

Ben is not initially open about David as a job when they are seeing each other. Fucking. Deception is often a deal-breaker for me, but it wasn’t a deal-breaker here because I started believing in them, in their relationship and Cameron Dane drove home the genuine nature of their love and their absolute need for one another. Is their relationship the cookie-cutter conventional one? No, it isn’t, it is (somewhat) co-dependent and obsessive –

He’s doing so much better than I thought. Pride tightened his chest, and then a low punch bruised his middle. What if (David) succeeds so well he doesn’t need me anymore?

– but it works for them. It is obvious it is meant to be this way. The author uses the MC’s really well to acknowledge theirs is a different relationship on a number of occasions –

“I don’t know. I just want to do whatever normal people would do with a free morning and not think too much about it.”
Ben wasn’t sure anyone would ever call him and David normal, but his heart swelled for David, and he murmured, “Sure, we can do something.”

I learned a long time ago that different relationships work for different people as long as they are old enough to make an informed decision, everyone knows the deal, and no one is hurt. 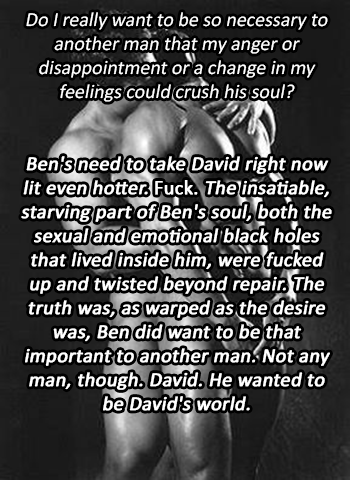 Cameron Dane usually writes scenes in books that are controversial or boundary- pushing, this book was one extended boundary-pushing scene. It was risky writing because it is a different primary character dynamic that more than a few readers could find uncomfortable. Personally, I applaud it. I loved the raw emotion bouncing off the MC’s that I have come to expect from Cameron Dane’s writing. Is it intense at times? It sure is, but for me it works. The sex? All kinds of channel fluttering and clenching and cocks filling with a gesture or look, and it’s long and often – it was smoking hot and erotic.

Song I listened to for Brokedown Hearts :  http://youtu.be/3EtCoL0XGRg

One of my favorite books ever is a book about a character I thought was beyond redemption. I remember reading the blurb for that particular story and thinking “No way in HELL will I ever like this guy.” I was wrong. It looks like that is the case with David in this one. It looks like the author took David and didn’t snap her fingers and say “He’s fixed. You all should love him now.” It looks like a really good book. I am all about second chances and I can tell I would enjoy this. Great review, my friend,… Read more »

I know the book you are talking about and if I am right it is by Rick R Reed. It is not easy for an author to redeem an unlikeable character. I LOVED David and I never, ever would have thought I could.. Of course I read it, it’s by Cameron Dane. She did good on that front and you are right, no snapping of fingers.

It’s not going to be for everyone, but no book is. I enjoyed it and I hope she writes some more really soon.

Glad you liked the pictures. Boy I could have gone crazy… 🙂

Yes, it was Raining Men by Rick R. Reed where he redeemed my most hated character ever (from Chaser). It takes a damn good author to do that and to redeem David in this one, as I can tell Cameron Dane did. It sounds like the way he was written was the way it should have been written instead of rushed, like I said.

I know your total Cameron Dane love so I wasn’t surprised at all that you enjoyed this book.

LOVE the photos. I know for a fact the author writes good sex scenes. 😉

Raining Men, that was the book. I knew it was Rick R Reed.

Ooo. Boundary-pushing and hot sex! I like the sound of this. Any book that includes sex that goes on for days is just fine with me. Great review, Kazza. Love the pics you put together for this! 🙂

Cameron Dane is certainly known for, uh, protracted sex scenes 🙂 Also the ruler of purple prose, which I love in CD’s writing.

Thanks re: the review and pics, Devon. It is always fun, or interesting, putting quotes and a picture together.