The Layover is my first-born novella. Therefore, like a typical new parent, I’m anxious, sleep-deprived, uncontrollably happy—and ready to give my baby anything. My brilliant beta-reader, Malin got me thinking when she said she’d like more of Jamie. As a result, the whole blog tour is a short prequel to The Layover—from Jamie’s point of view—in seven parts.

The Swiss Experiment (The Layover prequel) continues below, #7. 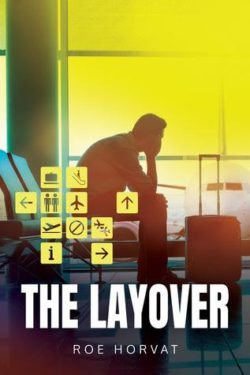 Eight years ago, Ondro Smrek fled Slovakia and the bigotry that drove his first lover to take his own life. The demons proved impossible to outrun, though, and now, desperate for somewhere to belong, Ondro is returning to start over. During a layover in Basel, Switzerland, he meets Jamie, an American living in Scotland who is as brilliant as he is beautiful. Jaded Ondro never would have guessed he could fall in love during a brief layover—until now. When he is put in a position to offer Jamie comfort without hope of recompense, Ondro doesn’t hesitate. Soon, he catches a glimpse of the home he longs for. But with their separation looming, confessing his feelings would only lead to pain and humiliation. Life has taught Ondro not to hope, but then, he never believed in love at first sight either.

Queer author, storyteller & graphic designer Roe was born in former Czechoslovakia and endured a miserable adolescence in the post-communist wasteland. Equipped with a dark sense of sarcasm, they left for Germany and later, Spain. Finally, they settled in Sweden, where the weather is nasty but the freedom great. Roe works as a motion graphics artist, loves Jane Austen, Douglas Adams and everything in between, preferably by the fireplace with a strawberry daiquiri in hand. Roe writes contemporary romantic fiction – it conveniently balances out their real-life pragmatism. When not hiding in the studio doing graphics, Roe can be found trolling cafés in Gothenburg, writing, and people-watching.

Get in touch with the Roe:

Prequel to The Layover

Jamie couldn’t expel the memory of the stranger from the Basel Airport from his mind. He’d put on an audiobook in the cab and then had to rewind a few minutes because he couldn’t recall what he’d been listening to. The slanted green eyes followed him, insistent and intrusive, like an embarrassing teenage memory.

The hotel was smallish, a beautiful art-nouveau building just two streets away from the Rhine River. Not that Jamie would have time to enjoy the sights. In his hotel room, Jamie showered quickly and put on his cozy pajama bottoms. He lay sprawled on the bed, trying to read long enough to start feeling sleepy. With no effect. Even though he was tired, his limbs heavy and head hazy, he knew himself well enough—trying to fall asleep would result in two frustrating hours of tossing and turning on the unfamiliar bed.

Half an hour later, Jamie tugged on his jeans angrily, slipped into a pair of his most colorful socks, and clutching his iPad to his chest, he headed downstairs. There was a large restaurant area, probably used as a breakfast room, and a lounge where only an older couple sat drinking tea and reading newspapers. Luckily, behind the reception area, hidden in a corner, was a darkened hallway, and at the end of it—like the gleaming light at the end of a tunnel—was a small bar. Jamie’s sigh of relief was audible.

He ordered rum and coke—again, settled into a chocolate brown leather armchair, and immediately put his headphones in, making another attempt with the audiobook. He would alternate. He could read, and when he’d start losing focus, he’d switch to listening. Satisfied with his plan, he opened the Kindle app. He didn’t look around to check the occupants of the bar. He hoped that the change of scenery, the alcohol, and the book, would be enough to distract him from his disturbing thoughts. He was fairly sure he’d succeed. If not for—

Movement directly in front of him made Jamie raise his eyes from his tablet. His breath caught in his throat. The stranger from the airport with the mystery accent and almost mean, slanted green eyes sunk into the other armchair by Jamie’s table, a rather arrogant smirk on his now familiar face.

A rush of energy caused by a mix of irritation and excitement, made Jamie find his voice. “Seems like it,” he replied, proud of himself for being able to react at all.

The man laughed, a gruff, mocking sound. “Hey, I’m your fellow victim of this ridiculousness. Of course, they put me in the same hotel. Not my fault.”

“I’ve never said you could sit here,” Jamie said slowly, trying to hide the tremor in his hands by fiddling with his earphones. What was it with this man’s attention that made Jamie want to overcome his fear?

“If I promise to be moderately entertaining, can I?” the stranger asked, one thick eyebrow rising high.

Jamie huffed out an almost laugh. For once, he was not tempted to run and hide. Which should terrify him even more. Instead, the excitement turned into pure warmth spreading through his belly and chest. This one time, he was going to enjoy an adventure. He was going to take all the fear, suck the adrenalin out of it, and morph it into life-affirming joy.

Jamie’s and Ondo’s story continues in The Layover.