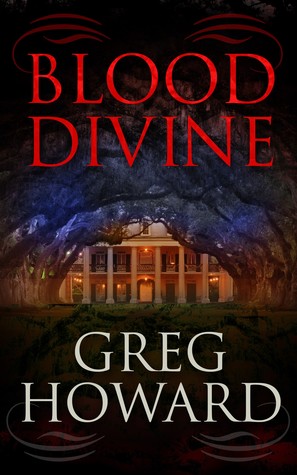 Cooper Causey spent a lifetime eluding the demons of his youth and suppressing the destructive power inside him. But a disconcerting voicemail lures Cooper back home to the coast of South Carolina and to Warfield—the deserted plantation where his darkness first awakened. While searching for his missing grandmother, Cooper uncovers the truth about his ancestry and becomes a pawn in an ancient war between two supernatural races. In order to protect the only man he’s ever loved, Cooper must embrace the dark power threatening to consume him and choose sides in a deadly war between the righteous and the fallen.

Blood Divine starts 20 years prior to current time when Cooper Causey is at the local haunted house,

Warfield, with his older brother and friends. They hear noises, get scared and cycle away, only Cooper’s bike comes to grief and he’s left behind. Blue, once a slave and a person of local folklore and legend about the old Warfield Plantation, who they say killed the plantation owners, appears and places his hand on Cooper’s head before Cooper passes out. This sets the tone for an interesting journey.

Jump forward to present day and Cooper has come back to his childhood town of Georgetown, South Carolina, after phone calls and partial messages from his grandmother, Lillie Mae, only to find she’s missing. As he looks around her house, Cooper finds Lillie Mae’s Bible open with what appears to be blood and Warfield written across a page, along with a picture dated 1864 with the name Sally on it. Cooper calls the police and RJ – Randy – his brother’s best friend, Cooper’s childhood crush, comes out to investigate whether or not Lillie Mae is actually missing or maybe wandered off.

From here there’s quite the cast of characters introduced to Cooper and the reader. It seems that Lillie Mae hasn’t exactly told Cooper everything there is to know about his family, his lineage, and what he is. Why he may need to stay away from Georgetown rather than turn up into the middle of a very spiritual and paranormal-thick town.

Without going into the plot too much, because there’s a lot that happens, I 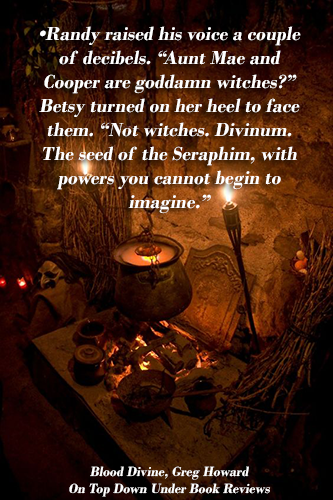 will say that this is an urban fantasy/paranormal read with religion at the root – the Nephilim are often used for an offshoot to supernatural beings, and that is definitely the case here. The take on the vampire, the Anakim, is the most interesting because there are some shades of grey in the various factions. Alexander Montgomery may clearly be the cause of big problems with his changelings, his overall plans, but the Jericho soldiers, one branch of the Anakim led by the Manheeg Joshua, are not so clear cut.

In among some of the discoveries and chaos, Cooper and Randy learn that they’ve both liked one another for a long time, only Cooper thought Randy, who had been married to a woman, was straight. Cooper has been somewhat… busy with other men when he originally left home. When they reunite they certainly start their relationship in a tumultuous way, I’ll give them that. They definitely support one another without question and I liked that the most about them, along with their easy banter.

The beginning hooked me.

There’s some nice writing and turns of phrase throughout the book. 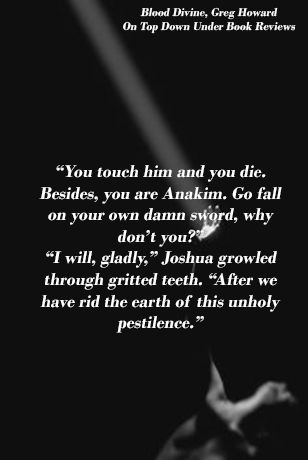 I’m always a sucker for religious themes, although it isn’t heavy in that department if that worries you. Nothing that I would consider blasphemous, just a different take on Biblical roots for vampires, witches, ghosts and so forth.

There’s plenty of food for thought and action, the action more so in the last half of the book. Once it takes off it puts it’s pedal to the metal.

There is a good contemporary freshen up of vampires – Anakim, and witches, Divinum, the fallen, and other characters. The urban fantasy elements are well written. There’s a good meshing of the bold personalities and factions. The changeling and Jericho army wars were interesting and I would have loved some more involved reading on that.

I did not feel Cooper and Randy’s attraction. I would have preferred that there was no romance in this book, or I would have liked to have seen the steady building of one. You can’t have the remnants of a childhood crush, flamed slightly at a family funeral, suddenly turning into, bam!… they’re in love, all the while finding out these other beings exist. Finding out that Cooper is something special and wanted in the supernatural world. It’s too much in one hit. I am guessing this is possibly #1 of a series because the ending was rushed with a number of important threads and a… situation hanging over Cooper’s, Randy’s, and one other’s heads.

Randy was incredibly put together for someone who learns paranormal beings live around them, seeing a vampire changeling army attack, reacting like it’s all in a night’s work for the local police department.

Blood Divine hooked me with the beautiful cover, then the beginning of the book had me in its palm. There’s some good writing throughout, but there are also a few hiccups in the story, not enough to take away my overall enjoyment of the book, and fascination with where this might go and how, it was fun, action-packed reading. I’d now like to be along for a further trip into Cooper and Randy’s life, not to mention one other character I shall not name. There is much future potential in this concept which I am sure will be a series – I don’t know the author so I can’t say, but I’m hopeful because I want some more. I’d also like to feel the love between Cooper and Randy because that is important for me. A very nice introduction to Greg Howard and his band of interesting and enjoyable supernatural beings. 4 Stars!

I knew as soon as I started reading your review that this book would be right up my alley. I’m all about paranormal and ghosts, as you know. 🙂

I hope this is the start of a series so things that are unanswered can be in later installments. I’m not a fan of books with religious themes but if it’s not overwhelming I think I’d be good with this one.

Great review. I love the visuals and quotes you used.

If you can get through Clipped and Bound, trust me, this is a picnic – just sayin’ 😀

It’s an interesting book with a good premise and plenty of action, plenty of characters to work with too, so I’m interested where it goes from here. I guess time will tell whether the author is moving ahead with another book.

Hmmm. I like vampire books, but I don’t like angel/demon/good vs. evil type books. And this one sounds like it’s kind of like both? It sounds possibly interesting, but I’m afraid it might be too much action, not enough character for my taste.

By the way, I don’t know if you meant more religious takes on where supernatural creatures come from or just in general, but if you like religious themes, you should check out Vespers by Irene Preston and Liv Rancourt. I just finished it last night and really liked it!

The Nephilim/ the Fallen, and some scriptures around them, are used for a root variation on vampires and the Jericho soldiers. That is definitely not going to be for everyone. No real demons, per se, I’d probably say a way of looking at a kind of fanaticism/cult while within paranormal elements. Action in the beginning, characters being brought in in the middle, then plenty of action in the 2nd half. I’ve seen Vespers around and about the traps, Kristen, including on your site, but I haven’t read the synopsis or any reviews yet. However, I think I’ll go look at… Read more »