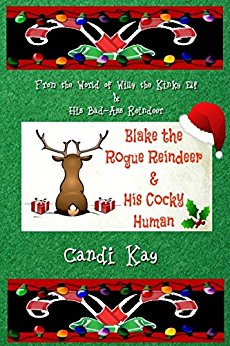 Except Reindeer Blake Simpson, that is. Sure, he’s beautiful like the others, but all respect for him flew off with the snowflakes last Christmas. When the Chief Reindeer offers him a chance to redeem himself he jumps on it without hesitation. All he has to do is keep a special visitor occupied leading up to the busiest night of the year.

For the first time in history, an outsider will be allowed inside the North Pole. Not just any outsider, but a human and Blake Simpson has never been fond of them. But a deal is a deal. He’ll babysit the man and then get on with his life, now free of what caused him to self-destruct last year. When he meets Seth Grant sparks fly, and not just the good kind. Not only is he a human but he’s a cocky one who Blake has met before.

Sometimes the magic of the North Pole has a sense of humor. Could the rogue reindeer and cocky human actually be meant for each other? Or will they be over before they start as secrets of Blake’s past are revealed?

You know Christmas is not that far away when Willy’s World comes around again. I want to start this review off by saying how much I love going back to the North Pole to be with Willy and his gang. I love that Willy and Randy pop in, as do Evan and Derek. In spite of past characters, each book is a true standalone featuring its own couple. However, I always recommend book #1 because of goofy Elf Willy and the love of his life, Chief Reindeer Randy. Book #2 spawned this third book because of a campaign by writer Devon McCormack to have a story about ‘poor, misunderstood’ Blake Simpson. I was not buying that campaign because I did NOT like Blake Simpson in book #2. He was a bastard. I started reading this addition to the series with one eye closed waiting for the dislike to resurface. Early Christmas miracle, it didn’t happen. Blake Simpson was completely redeemed, and not only that, I actually liked him. I liked him a whole lot. I am now a Blake Simpson devotee, and I can be a little unforgiving because book characters mean a lot to me.

The book’s synopsis gives any reader plenty to go on. Blake has been in trouble since last

Christmas when he wreaked a lot of havoc at the North Pole, nearly shutting down Christmas and causing injury to others. Since then he’s been in the Starlight Rehabilitation Clinic because of his substance abuse. Right near the end of his stay he’s approached by Chief Randy and his Vice Chief, Derek, to entertain a human that Santa has mysteriously invited to the North Pole – humans aren’t allowed at the North Pole, so what’s up with that? Blake is human-phobic, they’re okay to fuck but nothing more than that. He certainly doesn’t want to babysit one, but it’s that or Abominable Island… and you don’t want to end up there. So Blake has human sitting duty assigned.

Throughout the book, relationships are healed. Meek Evan, the most impacted by Blake’s 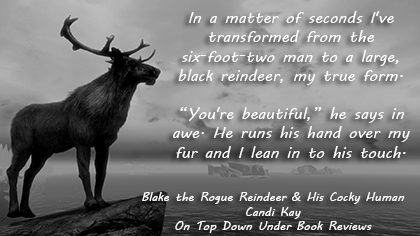 behaviour and problems last year, forgives Blake while also standing up to his protective mate, Derek – so you see a glimpse of character growth. Like most non-practising addicts, the guilt over what they have done takes up some headspace. I was glad to see Blake see his parents – who are wonderful – and I got a bit misty reading when he would fly by their house feeling awful about disappointing them last year. When he caught up with them, and his mum hugged him and spoke to him, gah… I was a little teary because I’m invested in this world. I honestly couldn’t believe how much I felt for Blake. I wanted to hug him.

So there’s atonement, which I enjoyed, and then there is also Willy’s cheesy and goofy humour and some typical elfy behaviour – including an incident involving too much Peppermint Whiskey, spandex, and a human about the workshop. Santa and Mrs Claus are their usual bitchy selves, they also know how to throw an end of year party that has the local North Pole gossip rag, ReindeerSecrets.com, kept busy or the rest of the year.

Willy’s World, as I call it, is fun and goofy – just look at the titles of each book for a starter – reviews here. In the North Pole – it’s totally real – there’s a sense of camaraderie, a sense of fun, there’s romance, there’s some sexy times, there’s emotional connection and love and mates and HEAs. This year addiction and forgiveness were added. I liked that aspect a great deal because it was 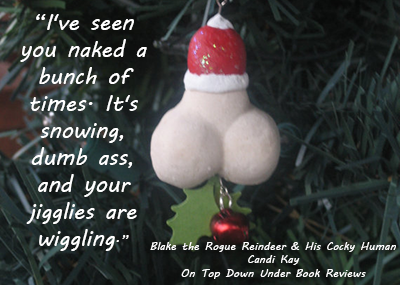 respectful while not being heavy handed, this series is fluffy and tongue-in-cheek but it always has some heart. Yep, this book definitely had a lot of heart. Blake and Seth are a good pairing and Seth fit comfortably into the North Pole gang, which is good because I want to keep on loving my elves and shifters and their mates. It looks like next year will see another instalment in this series with Barry, Blake’s brother, sharing in the love. Bring on Barry.

Because it’s easy reading. Because I love these characters and the fun sexy times of it all. Because of naughty older people in inappropriate clothing, and because some Christmas stories should be crazy and fluffy and get you in the mood, 4.5 Stars!  Oh, and I really love the cover with the lone reindeer. It’s perfect.

ARC provided by the author in return for an honest review but I’ve pre-ordered it.

I know your lack of love for Blake in the last book so it’s good to see he redeemed himself in this one.

I LOVE the visuals you used. I now want that ornament for my Christmas tree this year. 😀

Thanks, Cindi. Blake totally redeemed himself. I enjoy it when that happens and we both know it doesn’t always.

I think that Christmas tree decoration is all kinds of interesting 🙂

I loved the previous books in this serie and i look forward to see what happens in this one and to see if (for me) Blake redeems himself 😉 I can’t wait for the release and i put it on my TBR list.

Angela, I’m crossing my fingers that you love the new Blake. 🙂 It thrills me that you enjoy the series. Thank you!

I am so happy that you enjoyed Blake and Seth’s story, Kazza. I admit to being really nervous over how the new Blake would be received. He was originally written (in ‘Evan’) with no plans of giving him his own story. I am SO happy I redeemed him to you. 🙂 The scenes with Blake’s parents were my favorite ones to write so thank you for saying what you did about them. And thank you for the fantastic review! I can’t say enough how much I love this review and the photos and GIF you used. I now want one… Read more »

I honestly did not see Blake being redeemed. When I say I did not like him in book #2, I really, REALLY meant that. I am always happy when a writer can have a character atone, and Blake even made me a total fan. So, you know, something good came out of the request for his own book 🙂

If you can find those Christmas ornaments I’ll order two of them. Thanks 🙂 :

Ok this is oddly perfect timing because literally just today, like a few hours ago, I was Googling for SFF Christmas books because I realized I have no Christmas-y books to read this holiday season, and I want to be prepared when December comes around! Lol. And this series is also M/M, so even better! But I don’t really read anything less than 100 pages, so I’m not sure what to do about the first two books since I noticed they’re short but I don’t want to miss anything and be confused :-/

Like presents, everyone needs to have their various holiday reads sorted early 😀

Well… as it just so happens, there’s a giveaway of the first two in the series – e-book/or treed – coming up next week. Pop in and try your luck.

This series is kooky and fluffy and goofy and I’m hooked on it – and they can definitely be read as standalones, Kristen 🙂