Beauty and His Beast, Bey Deckard 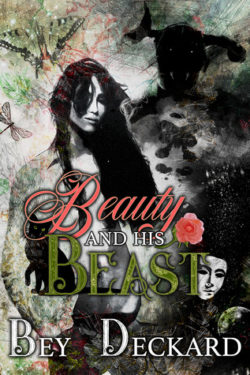 They call him Marrex the Monster.

Deformed and wretched, Captain Marrex roams the black of space with only a pair of eccentric AIs for company. The curse in his DNA means a long, bitterly lonely life for the Ghelyxian, and it’s a fate Marrex knows he can’t change.

After a long sleep in stasis, Juniper Bo wakes to discover he’s an unwelcome guest aboard Captain Marrex’s ship. Though he tries to stay away from the surly Ghelyxian, he just doesn’t get why the curse is such a big deal—then again, Juniper knows his tastes are rather… unusual for a Human.

When friendship blooms between Marrex and Juniper, they realize they face a future that neither could have predicted in their wildest dreams.

Juniper Bo, I love that name, wakes up on the Stellerion, a junk salvage ship, after seventeen years stasis in a pod on a Nelami Shuttlecraft. He was on his way from his home of Terra Deux to find work because his family fortunes had changed dramatically. His father and his sisters, Acacia and Willow, continuing the botanical names, stay at home. The ship he was on was apparently hit by an asteroid and he’s lucky to be alive let alone on board the Stellerion. Mind you, in the beginning, Marrex isn’t sure he wants a human on his ship and jettisoning him could be a plan. VAL and S1N, two holoprojections – think less obsessive HAL x WALL-E and the Cheshire Cat – are curious AIs and decide to wake up the human.

While Juniper is intrigued by the captain, Marrex is standoffish initially, gruff, even if he is undeniably attracted. As he gets to know Juniper, he can’t help himself, he has to connect in some way. Meet-ups at dinner are a good way to talk, especially now that Juniper has fixed the replicators. I won’t go over the whole book because it is a retelling of a known fairy tale even with an added sci-fi twist. So I’ll add my thoughts.

If you enjoy retellings of fairy tales that definitely helps.

“You like this?” Marrex said in a low voice.
“Yes… oh yes… fuh-uh-fuck!” Juniper yelled, pumping his hips as Marrex slowly fingered him into another orgasm.

But there is also this more connected style of sex as well which definitely should appeal to the MM or gay romance reader.

There’s an age difference too. Marrex has been trawling space on the Stellerion for over sixty years and Juniper was twenty two when he was placed in stasis seventeen years ago, and he’s remained that age.

VAL and S1N are truly fantastic secondary characters, they help bring some fun and snark to the story. They also add extra depth to an already well developed sci-fi/fantasy backdrop.

You know this is a gay retelling of Beauty and the Beast, and it follows the essentiality of the tale well, but I think this retelling is a bit more upbeat and definitely stakes its own claim. The author also mentions the sci-fi aspects were due to his love of a Disney space book. Mix them together and, voila, you get Beauty and the Beast in space. It works really well.

Juniper’s hair was wet and hung loose over his shoulders. Today he was wearing a pale-blue poncho over a pair of glittery silver leggings and his feet were bare like usual.

For me, personally, I love that this story is about someone marching to the beat of their own drum. Not to other’s. Juniper wears the most incredible meshing of colours and styles of clothing throughout, and when he tries to be more “professional,” Marrex tells him he likes what he usually wears. It’s also about loving a person for who they are, not being caught up in other people’s, or society’s, current aesthetic or ideas of gender behaviour. Marrex is big and furry – covered in red hair with black patterns – has fangs, horns, a black and longish tongue. Juniper is androgynous, has long dark hair, and gets teary openly about things that touch him in some way. Juniper does Juniper, and he reminded me of the 60s and the 70s – even that cover is fabulous and trippy. Juniper is also more confident, chatty and casual. Marrex is shutdown and grumpy, has big self-image issues, clearly because of his change from the more accepted Ghelyxian standards and his isolated, self-imposed exile in space. His feelings are easy to understand. Their differences make this a nice yin and yang story full of chemistry with believable reasons as to why they could, and did, fall for one another.

This book is an interesting, joyful, and strong entwining of a classic tale within another world and time. I was impressed with the sci-fi/fantasy world building alongside the romance. This spin comes omplete with very likeable characters – from Juniper to Marrex, to S1N and VAL. It’s strong writing that didn’t overplay the story or location at any stage. That there is no magical prince appearing because of love, rather a visibly happier individual, really made this version so, so right. It was light but there were moments that tugged at the heartstrings just enough to involve and engage the reader that little bit more.

He wondered how long it would take this time before Juniper begged him to stop. Hopefully, a long time. Then he would carry Juniper into their quarters, and he’d bathe him and tuck him into bed and cuddle him for the rest of the night while the Stellerion raced towards the Human’s homeworld. And Marrex would lie there awake, trying to ignore the doubt burning in his belly.

Bey Deckard continues to impress me to the point where I’m pretty much auto-buying his books as they come out. He really is mixing it up within gay romance and queer fiction – dark, thriller, horror, contemporary, fantasy. He writes with a deft touch in this retelling of a classic, giving the characters a nice platform to shine. Not once did I think – ‘Yeah, I‘ve read this before’. If you’re not really into the usual contemporary Season’s stories but like the general December reading buzz, or you just like the sound of the book, I say grab it and enjoy. Beauty and His Beast has a buzz of its own and I thoroughly enjoyed every minute of it. 5 Stars!

I’m not a fan of sci-fi books, as you know, but I am huge on retellings. It doesn’t matter what genre or sub-genre. I love the character names – Juniper Bo is awesome! – and I’ve always loved books with characters who are so different yet they fit so well together.

Great review of what I can tell is a very entertaining story. Adding it to my TBR.

I hear you. Me reading sci-fi is heavily dependent on the rest of the story concept. I rarely read straight-up sci-fi unless it has some hook, which this did.

Ha ha, I couldn’t resist putting that part in, the 37 orgasms, but all I can think is ouch, tender 😀

Thanks Cindi, I believe you will really enjoy this story.

“Magic penis” is a genre on this blog? Bahaha that’s fantastic. And 37 orgasm?! I feel like that would just kill you or something lol. I think that might be a bit on the extreme side for my reading tastes. This is also a pretty short read for me. But it does sound good! I like SFF retellings, and the characters sound great! I’ll add this to my tbr.

Yes, magic penis fits on this blog as a genre, lol. My mind is saying 37 orgasms would have anyone shrivelled up and pruney, but the other part of me says the effort could be worth it 😀 😀