It’s hard to think that seven years ago I was hovering over my computer hitting refresh on Amazon and Goodreads as my first novel came out. Since then I’ve done a lot as an author, both good and bad. I’ve written pieces where I tried to chase a trend (bad idea) and I’ve written novels that I still reread on tough days when I need a little fictional escape.

Sometimes I feel like I’m inflicting my therapy on readers because these days I write stories where I fix the problems I feel helpless to address in real life. I wrote one whole novel because I was pissed that one of my students was kicked out of his house for coming out as gay. I firmly believe in the old adage to avoid pissing off writers because we will write you into our novels and kill you.

And make fun of you while we do it.

With my newest release I was taking aim at a particular annoyances in my life. I don’t even remember the specific Facebook conversation, but someone was saying that they were sick of slogging through so much plot in their gay romances. Specifically, they were disappointed that a friendship the main character had never led to sex, and the reader said they came to gay romance to see sex. First, that’s erotica, not romance. I’m a fan of both, but let’s not confuse them. Second, as someone who is gay, that rubbed me wrong in all sorts of ways.

Yes. I want gay people to be able to have sex without one of them ending up dead. (I’m looking at you, Tara and Lexa and Sara and Larry and Renly and Loras and, and, and.) The second they have guilt-free gay sex, the clock is ticking.

But it’s not all about gay sex (or the way Hollywood assumes gay sex leads to decapitation and or random drive by shootings). Do you know what else gay people do?

Have lives. Go to the store. Have actual friendships with people they aren’t trying to get in bed. Raise families. Clean up dog poop. Curse when the alarm doesn’t go off in the morning.

I wanted to write a story that was a classic science fiction adventure, like the ones I grew up reading. But I also wanted to show a gay man (Tank) having different relationships. Sure, the one he has with Lev is sexual. Exceptionally sexual. They like to explore and have sex on alien surfaces—don’t judge.

But Tank also has strong relationships with Colonel Clyde Aldrich and John and Brian. They aren’t sexual, but Tank isn’t a purely sexual creature. Sure, he has sex. When alien hormones get involved, he might have way more sex than he expected. He enjoys the hell out of sex. He also wants mentors and brothers and friends. He wants Lev to have those same things.

I want Tank to have what I crave and am annoyed at finding too rarely—a full life with a variety of relationships that all provide the emotional support he craves.

That conversation might have annoyed me enough to start me thinking, but I think this actually goes back to Tara on Buffy the Vampire slayer. I loved her. Sure, I was old enough that I felt guilty loving her and didn’t admit to watching the show outside of social media, but I loved her.

All she had was Willow. Riley Finn had friend and team members. Angel had an entire century of backstory. Anya—oh Anya—got to have all the quirks she wanted (although I think the show did her wrong). But Tara got to have Willow. Period. She never got anything other than her one gay love.

And since I’m a writer, I’m going to try to write into existence the world I want.

Well. Sorta. Hopefully the aliens are just fictional. Seriously, the aliens in this book are kind of assholes, and I don’t want to write them into existence. But having a full, healthy support system in and out of bed? I wish that for everyone, gay or straight. 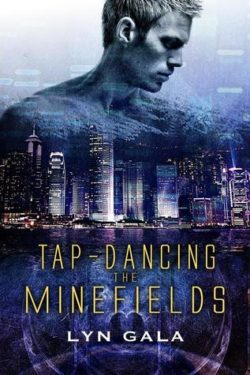 Sometimes the fiercest battle a man faces is against himself.

In the hidden alleyways of New York City, George “Tank” Tankersley defeated what he believed were demons. But the victory cost too much. Tank joined the Army in the hope of outrunning the guilt haunting him—only to stumble into a vast and deadly conspiracy, the enemies he’d hoped to never encounter again, and the arms of the brilliant, eccentric scientist tasked with saving humanity.

In a world where the line between dark magic and alien science is thin, Dr. Lev Underwood must reverse engineer recovered alien technology to give humans a fighting chance against the extraterrestrial beings who consider Earth nothing more than a petri dish. His old friend, Colonel Clyde Aldrich, wants to protect Lev from entanglement with the scarred and emotionally volatile young soldier, but Lev cannot help the pull he feels toward Tank. Still, his first loyalty is to the secret government program, and love might have to take a back seat to protecting the world. But if he can find a way, Lev wants both.

Lynsey “Lyn” Gala started writing in the back of her science notebook in third grade and hasn’t stopped since. Westerns starring men with shady pasts gave way to science fiction with questionable protagonists which eventually gave in to any story with a morally ambiguous character. Even the purest heroes have pain and loss and darkness in their hearts, and that’s where she likes to find her stories. Her characters seek to better themselves and find the happy ending (or happier anyway), but it’s writing the struggle that inspires her muse. When she isn’t writing, Lyn Gala teaches in New Mexico.

Thoroughly enjoyed your great post, especially the part about “avoid pissing off writers because we will write you into our novels and kill you.” It’s given me something to consider as I work at my own writing. Just signed up at DSP and ordered your book. Looking forward to reading it having already been enamored of you prose.