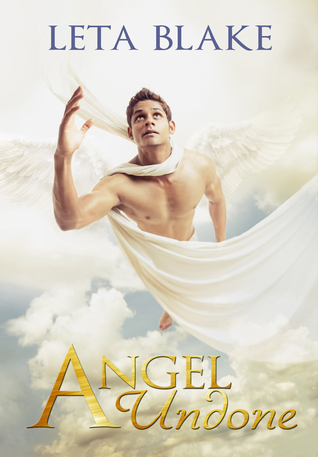 Michael isn’t sure what it is about the vulnerable, self-deprecating Asher that calls to him, but something about his restrained depths, gentle smiles, and encyclopedic knowledge of flowers tugs at Michael in a way that can’t be denied. Too bad romance isn’t part of his mission. 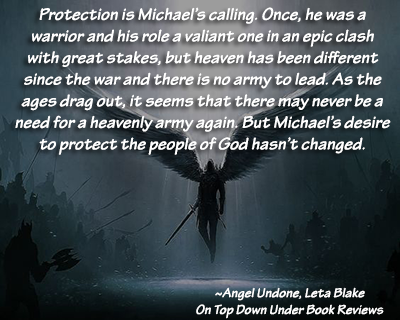 being a different warrior in contemporary times. Things have changed since Lucifer was cast out from Heaven. Technology, the people, the times have cast a different tone and need to his missions now. Michael tends to people needing salvation, whether that be from excess substance use, a lack of food, an emotional crisis, needing shelter or warmth. No matter the calling, Michael is there when he’s given a mission by  God.

This particular night he’s been sent to a bar where a soul in need ponders his future, and will possibly be taken over the edge if he hooks up with the wrong person. Asher is forty, isn’t working – looked after his grandmother until she died – and feels like his family see him as a failure… and he’s never slept with a man, although he wants to. He’s not in a good place and Michael is there for him tonight.

Michael curls his wings up into his scapulae, he controls his light, he uses his grace, or a push, to see and feel inside someone and know what they’re feeling or thinking. Where they may be headed. Asher seems to be headed down the wrong road and tonight he needs Michael. Actually, he’s always needed Michael.

There’s more this time for Michael. He develops connection. Normally it’s a nights mission and he’s

moved on. Only once before did he develop feelings but when God called him away Michael left, albeit sadly, as is always required. This time he’s thinking about the what ifs of not moving on. The repercussions.  Not only does he give it consideration but he consults Lucifer, his brother living on earth. Lucifer feels all will be cool but he is who he is and he could be, possibly is, yanking Michael’s chain.

This novella was good, lots of quote-worthy lines I could have used in this review. I like the way the author says some things that are deeper but aren’t framed that way. Angel Undone is kept light and sexy, but scratch a bit under the surface and there’s more substance. Michael’s inner ponderings take him further. What would it be like to be have the apparent freedom his brother Lucifer has? Leaving God’s love for another kind. That Lucifer runs a surf shop and reminds me of Woody from Earth Girls Are Easy was all kinds of weirdly interesting as well.

The reason I rated Angel Undone at 4 instead of 5 stars is because I feel the story would have been better served with extra time to develop Asher’s backstory a bit more. I would have liked some more on Michael’s other missions. The ending, that time period spent apart, needed more fleshing out. That’s it.

ARC supplied by Indigo Marketing in return for an honest review 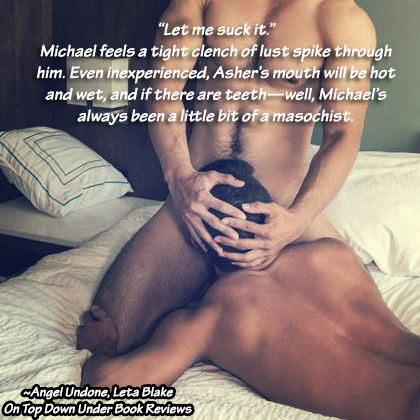 I love your visuals for this review. And the extra zing… wow. 😉

Great review, as always. I’m now wanting to know all about Michael and Asher.

Oh yes, you have to have extra zing 🙂

This review and some others I’ve read make it seem like this story matches that pretty pretty cover. Sexy angels are a fave! 😉

That cover definitely stands out, Jill 🙂 I like some sexy angels too. I have a couple of reviews on here with fallen angels – they’re the best kind, lol