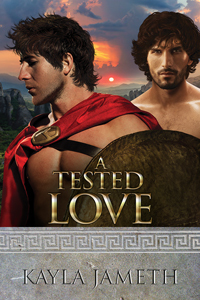 A Tested Love takes up a few months after A Spartan Love. Andreas is grieving or angry, depending on his feelings at any particular time, because his lover, Theron, disappeared after they shared their bodies and a connection for a while under unusual circumstances.  Theron is a warrior. A Spartan. A man who let a helot – or slave – into his life. He shared Andreas’ bed. It’s something he never believed possible. Spartans kill helots, they don’t sleep with them, and they certainly don’t develop feelings for them. In Sparta the decree is clear, men do not sleep with other men and, if caught, there are dire consequences.

Andreas knows that Theron has either left him or he has died. It’s one or the other. He dreams about Theron often and wakes on a shout as his dreams disturb him.  He vacillates between being upset that Theron may have died to anger that he may have just left him after having had sex with him. That he was used.

However, life goes on at his land and he does what he knows, he works his plot as hard as he can. He doesn’t want to marry Charis, his neighbour’s daughter. He doesn’t want to be lonely either, and before and after Theron he is very lonely. He wants Theron but how can he be with a warrior who kills his people? A kryptes killed his father and he yet he slept with one and is thinking and dreaming of one. Besides, no matter what, alive or dead, there can be no future for them. Is there really much future at all for a helot working his land in isolation in Sparta?

Pausing to look back over his shoulder as he swung the door open, he briefly wondered how his life had come to be this barren cycle of wake, toil, and sleep to wake again. Would he still be doing the same in a year, a decade, his entire lifetime? Forgotten and alone.

Theron has his reasons for not going back to Andreas but he thinks of the helot constantly. He compares the food he once thought was good to Andreas’ and it always comes up second best. His loyalty may be to his fellow Spartans but that’s being tested. He may worry about what his mother will think of him but love and affection are strong motivators. He wonders what Andreas is thinking about him. If he’s thinking about him at all, but he can’t go back and risk bringing attention to Andreas. He needs to be with his fellow krytes for the week long Karneial. He has to catch up with his mother, see Leonidas, his mentor. Confer with his shield-brothers and find out if anyone knows where Coridan is and if anyone has discovered who told the ephors about Lysander and Coridan’s love and sexual relationship. One that caused Lysander to kill himself and Coridan to run or be killed. His ‘brothers’ have no intention of doing the latter, their loyalty lies to one another over others.

But the Krypteia was different. Spies had determined which helots posed a threat and reported their findings back to the ephors. These men were targeted, unlike the random transgressors Theron had slain before. 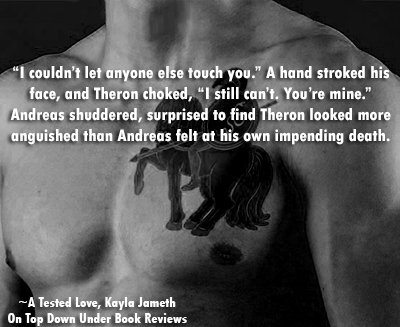 out their feelings? Can they trust one another? More to the point, can Andreas trust Theron? How will Theron deal with the list of helots to kill, one that includes Andreas’ name? How does he decide between feelings and duty? Who betrayed Lysander and Coridan? Why is Andreas’ name on the list Leonidas gives Theron in the first place? And what do you choose – loyalty to State or your depth of feelings for someone you only ever viewed as a slave previously? Both men have to rethink everything that has been drummed into them for most of their lives.

He’d imposed the ephors’ curfew and slain those helots who had defied the edict. But somehow this was different. These men weren’t openly breaking Spartan law. For some, their sole “crime” was their large size. Like Andreas.

The Greek god Apollo also has a mission that he needs certain warriors for, ones with strength and empathy. Ones who definitely understand loss as well as loyalty and will be his warriors, not Sparta’s.

Coridan? The bereaved warrior was called Coridan? Then Lysander must have been his lover, the youth who committed suicide. At last, Apollo had a name. Tracking the grieving youth would be easier.
The two Spartan warriors, Theron and Coridan, would be an asset to the select group he was summoning to his sacred precinct at Delphi.

My primary niggle with this book was the slow start – hang in there, when Andreas and Theron link up around the 25% mark it does move more swiftly and builds well to the end. I also would have liked more of a conclusive ending, but I’m generally not good with series that have the same two MCs throughout.

A Tested Love is a well written historical gay romance. It’s definitely well researched and a labour of love, that is evident in the details of the writing. It’s not as steamy as A Spartan Love but that’s to be expected. This time it’s more about the issue of trust needed in a more 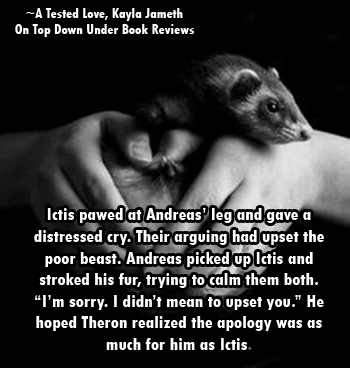 complex relationship. One that is building from initial lust and attraction to much more. Then there’s also the matter of being on the run, two men changing their entire lives around, the co-mingling of Greek mythology and human lives and events. Andreas’ lovable ferret, Ictis, is a pivotal part of the book and makes for some cute and very sweet reading. He also acts as a conduit between two men who are struggling with the next phase of their relationship, uncertainty, and change. The use of the Greek gods to tell the story alongside the mortal characters in the book is really cleverly done, and effortlessly integrated, yet again. If you enjoy this period in history in your “MM” stories and if you like some Greek mythology as well, then the Spartan Love series is very well written with interesting, nice  MCs and is highly enjoyable reading. 4 Stars!

I absolutely love Greek mythology. I can tell this would be a very interesting series. Fantastic review and I love the quotes and visuals. I really love Ictis. 🙂

I love Greek mythology as well and this is a very lovingly researched and written historical gay romance.

I really love Ictis too. That’s why he gets his own pic and quote. It sounds kind of funny but he is integral to the overall feeling of the story and the two MCs 🙂

Thank you for the lovely review. I’m glad you enjoy the era and characters.

In standard ferret form, Ictis is a lot of fun. He can always be counted on to do something amusing or state an opinion his humans may have difficulty with. Andreas loves him because he was his sole companion for a while. Theron likes how he incorporates some of the more benign aspects of Spartan life. And of course, he is one of the most positive things in the story linking Andreas and Theron. He wasn’t intended to take that role, but who can deny him anything?