A Fashionable Indulgence (A Society of Gentlemen #1), K.J. Charles 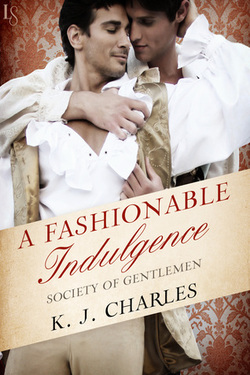 In the first novel of an explosive new series from K. J. Charles, a young gentleman and his elegant mentor fight for love in a world of wealth, power, and manipulation.

When he learns that he could be the heir to an unexpected fortune, Harry Vane rejects his past as a Radical fighting for government reform and sets about wooing his lovely cousin. But his heart is captured instead by the most beautiful, chic man he’s ever met: the dandy tasked with instructing him in the manners and style of the ton. Harry’s new station demands conformity—and yet the one thing he desires is a taste of the wrong pair of lips.

After witnessing firsthand the horrors of Waterloo, Julius Norreys sought refuge behind the luxurious facade of the upper crust. Now he concerns himself exclusively with the cut of his coat and the quality of his boots. And yet his protégé is so unblemished by cynicism that he inspires the first flare of genuine desire Julius has felt in years. He cannot protect Harry from the worst excesses of society. But together they can withstand the high price of passion.

Includes a special message from the editor, as well as an excerpt from another Loveswept title.

KJ Charles has become an auto buy author for me. Her books always hit the right spot for me and A Fashionable Indulgence is no exception. The first book in a new trilogy, this has made me even more excited for the next two books.

At first, I admit, I struggled to get into it. There was a lot for me to adjust to with the 1800’s historical settling and politics, but I soon found myself falling into the story and enjoying it more and more.

I loved Harry. The lost soul who was so easy to love, for me at least. He’d been through a lot in his life and had done things he didn’t really want to do, but had no choice. All he wanted to do is belong and when that chance comes in the form of a wealthy grandfather, he jumps at it.

Julius is the man who has to teach Harry how to be a gentleman, something he’s not exactly thrilled about at first. He was a bit more difficult for me to love in the beginning, but as I learned more about the closed off grieving man, the more I found myself liking—and eventually loving—him.

The relationship between these two is beautiful. It starts out as student/mentor, develops into a reluctant friendship and finally evolves into lovers who so deeply need each other, it had me rooting for them through all the BS of the historical setting.

Harry changes Julius in many ways. He helps him loosen up and see the world differently. He brings out the man behind the grief.

“It’s not that. I’ve made such a mess of matters and to embroil you any further—You know I love you. I don’t want to entangle you.”

“The problem is, you already have.” Julius’s fingers twined with his hair, “You have entangled me so thoroughly that I doubt I shall ever be satisfied with solitude again. I am well aware that you are storm-tossed, my dear. I merely wish that you will permit me to give you a port when you need it.”

He kissed Harry, gently. “And I have rarely seen a more precious sight that you lying like a mountebank to save your friend.”

“Utterly shameless.” Julius kissed him again. “Quite magnificent. I was proud to stand with you. And talking of stands…” He moved his mouth to Harry’s ear. “Next time you wish to lie to agents of the Crown, I insist you let me watch.”

I enjoyed seeing all the secondary characters and how they shaped the story. Especially Verona, Harry’s cousin, who was such an amazing, likable and strong character. She was a bit of a surprise to Harry, but not to me. I couldn’t imagine the story without her and quite honestly, I would have been happy to have more of her. She especially endeared herself to me in the last chapter, where she did something I knew she would do.

An ARC was provided by the publisher via NetGalley in exchange for a fair and honest review.

Nice review, Trisha. One day I hope to read a book by K.J. Charles. They always sound like “me.”

Thank you, Kazza! I really hope you do! KJ Charles is an amazing, amazing author and I love reading her books. 😀