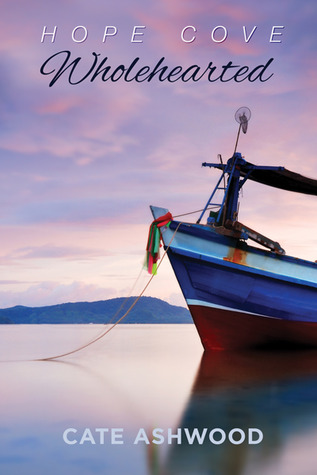 The man in his arms felt right, like he fit there. It felt how it should feel, and no one was going to be able to convince him any differently.

Deputy Declan Chase is a nice guy. He was helpful when Oliver came to town and into Mack’s life in Brokenhearted and now he is helpful again. Only this time he is trying to help someone lying on one of the docks in Hope Cove after a local has called in a “sleeping” man. It doesn’t take long for Declan to know that something has happened  in sleepy, quiet Hope Cove. A young man is lying battered and bloody with the word fag in blood near his body. Declan keeps him breathing until the EMT can turn up and then he gets in and doesn’t leave the victim’s side in the hospital. Declan feels this instant pull to Lucas Hale – his name is on his license in his wallet. He can’t help but pull up an uncomfortable vinyl chair in the hospital and see if Lucas pulls through.

Declan is lonely and he has had some unpleasant background to do with being gay. He knows what it’s like to have people hurt you for your sexual orientation. It’s why the once ambitious cop is now a Deputy in the small Maine town of Hope Cove. He was hurt by fellow offices when he was stationed in Austin, Texas. He can’t prove who did it but he is pretty sure after his ex police partner created a lot if ill will for him. As much as Declan loves his new home of a year, he would like someone special to be in it. He’s happy for his boss, Mack, but he would like someone to come home to. Someone who wants the same things he does.

Lucas Hale is a Lobsterman. He has been working fishing boats for a number of years crabbing and commercial trawling for lobsters. It pays more money than construction, his previous employment. But it seems as if this career has ended in something hateful and violent. The thing is, Lucas is not talking. Says he doesn’t remember anything that happened before waking up in hospital. He also makes it clear that he doesn’t know why Declan is hanging around the hospital. He doesn’t even know Lucas.

Time spent in the hospital cements a friendship that Declan feels can develop into more. He really wants it to. He ignores Lucas’ lack of conversation, his “whatevers” and concentrates on getting him to open up more.  He learns that Lucas likes graphic novels and horror movies so he gets behind that. And when the doctor says he can’t be released unless he has someone to care for him and a place to live, Declan steps up with an offer. Lucas won’t commit to that and Declan lives in hope that he can get him back to his place in Hope Cove. That when he does, maybe, just maybe it will be right…once he can get past the snark and the one word answers –

“I should have guessed,” Declan said, his tone dry.

Of course, Lucas is always going to go back to Declan’s place and from here they develop a mutual attraction. Declan starts bouncing the “L” word around in his head in relation to Lucas and that feels right to him, even

though they have only known each other for weeks. It felt right to me too. Declan is so sure and so certain that Lucas is his, who am I to stand in the way of such certainty.

Even though there is a little drama, this is mostly a sweet and lightweight character driven romance. It is light on the case details and light on sex but it does have some lovely kissing. The characters are nice and I was so happy to see Declan get his man and Lucas feel like Declan and his house and the town of Hope Cove were his home. I hope to see more of them in book #3, Ironhearted. It was lovely to see some more of Mack and Oliver and their surprise as well.  Mack remains such a favourite of mine.

This series is highly recommended for lovers of Cate Ashwoods’s writing. And for those who like a more romantic, gentle, sweeter MM series with a town full of decent people. There are times I just want to visit somewhere where people are kind to one another, and Hope Cove is that place. You even get Oliver’s yummy Cinnamon Rolls with Bourbon Cream Cheese Frosting recipe.

“Stay with me?” he asked, his voice small and broken.

Review copy supplied by the publisher, Dreamspinner Press,  in return for an honest review.

Hope Cove sounds like my kind of place. I love a nice, sweet series and I can tell this one is.

With the exception of the “whatever” I just want to hug Lucas. 🙂 Great review. Love the GIF.

It is your place. Its mine too. I tell you what, the guys to Siberia and we’re off to Hope Cove!! 😀

It is a lovely series and I like that GIF too. I spotted it earlier and then had to remember where I’d seen it and go and grab it for this review.

The GIF is perfect. 😉

Yes, we’ll send the guys off to Siberia and meet up in Hope Cove. We’ve been planning their trip for awhile. We need to step it up! hehe

The Siberian tickets are booked.

I’ll meet you in Hope Cope. Then we can eat some Cinnamons Rolls with Bourbon Cream Cheese Frosting and the guys can have Borscht 😀