When All The World Sleeps, Lisa Henry and J.A Rock 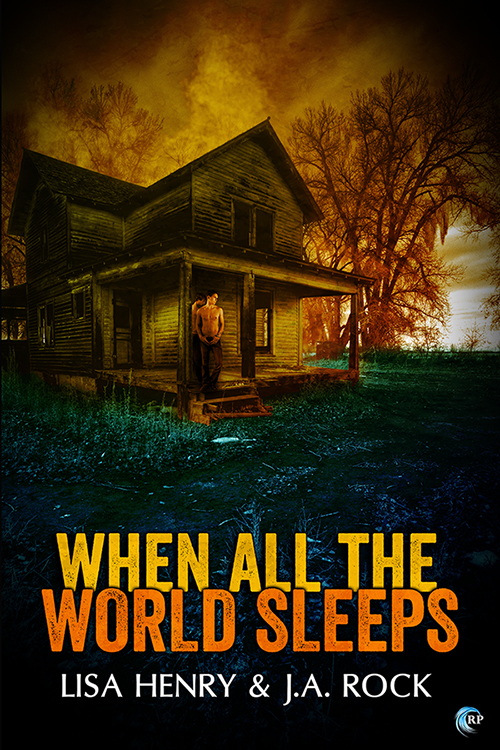 And Bel had raged with the rest of the town when Whitlock had been released after eight months in jail. This wasn’t about Kenny Cooper – it was about justice, which Bel believed in, thank you very much. You didn’t burn someone alive and then walk free, no matter what some quack said on the stand about your sleep disorder. It was fucking impossible to drive five miles in your sleep, shake kerosene all around the base of a house like you were watering the goddamn plants, flip your lighter on, then go home and climb into bed.

I think that paragraph alone sums up how easy it is to believe something without knowing all of the facts. It’s also how, in the beginning, Bel thinks like the town of Logan.

Joe Belman has liked Daniel Whitlock since he was twelve and he saw sixteen year-old Daniel run down his street with the school’s cross country team. Bel also remembers Daniel at the river reading his chemistry book, that Bel asked him to come on into the water but Daniel didn’t. He also use to see Daniel when Bel worked at the local convenience store, Harnee’s. Had always sold Daniel a Twix and a Mountain Dew.  In fact, he sold him a Twix, Mountain Dew, and a lighter the night that Kenny Cooper’s house went up in flames, with Kenny right inside it. He also testified to that at Daniel’s case. Quite a history.

Bel has seen Daniel Whitlock in town recently, after Daniel spent eight months in jail for the crime that the judge and jury believed was caused by sleepwalking, not a premeditated act. Bullshit, right? Bel said so. The town thinks so. Bel sees Daniel coming out of Greenducks, Logan’s don’t-ask-don’t-tell (gay) bar, acting like a crazy, a tweaker, a no hoper – just like everyone in Logan believes he is.

The guy was slower than a frozen creek, and Bel hated how much he liked looking at him. Only thing more fucked up than being a murderer was having a hard-on for one.

Now twenty-three, Bel is a deputy in Logan, SC and when there is a fire at Daniel’s cabin out in the woods, he happens by at the right time. Daniel is chained to his bed and Bel certainly notices that. Yes, the chained up Daniel is something that Bel is deeply fascinated by, but more than that it’s the degree of effort Daniel has gone to to sleep without anyone being hurt. It’s something else. He has everything possible to keep himself out of town and locked up at night – ice locks, combination locks, keys in his own urine. But nothing has been failsafe.

Bel starts spending time with Daniel under the guise of looking into who tried to burn down Daniel’s cabin, which is true… but only to a certain extent. In the process he learns a whole lot more about what makes Daniel tick. Just how gentle a soul Daniel is, how resilient, given everything that has and is happening to him. It also helps that Bel’s sister-in-law, Dav, Daniel’s PO, believes in Daniel – he is respectful, never fails a drug test, and he works afternoons cleaning in the library. She fully subscribes to the fact that Daniel has paid his dues. Bel starts to look after Daniel when he sleeps. He becomes protective, and he begins to see that there is more to the story than he ever thought or knew. He also cares. Deeply.

Daniel is now twenty-seven and he hasn’t really noticed a lot about Bel, other than he is a deputy and he was the “Harnee’s Kid.” Daniel spends so much of his time trying not to sleep, because shit happens when you’re Daniel and you sleep – you paint your parent’s house walls neon green, you wake up in strange 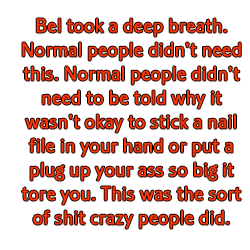 places, you draw, you have sex you don’t remember, you arrange knives, and you burn houses down with people in them. You also have the whole town hating you, your younger sister freaked out by you, your parent’s no longer loving you, never believing in you, not supporting you – irrespective of the physical evidence. When Daniel was brutalised within an inch of his life, and in hospital, his father asks, “Daniel, what did you do?” And he accepts that he is a bad person unworthy of love. Then, when he does do something resulting in death, life becomes a monumental struggle with no one to support him. He hooks up with people who can cause him pain, not because pain makes him feel good, but it makes him so tired he can sleep without hurting anyone. Or it hurts so much he stays awake in agony. Either works for Daniel.

Daniel has parasomnias – for him this means sleepwalking and night terrors – combined with serious triggers. Triggers that aren’t going to leave him alone until they have helped 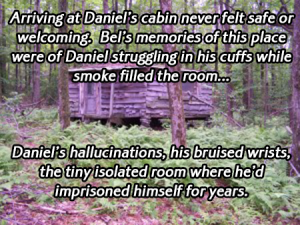 him over the edge. Clayton, Brock and RJ, the friends of the late Kenny Cooper, are cowardly bullies. And so was Kenny. But Kenny is dead and people hold yearly vigils for the dead. People don’t speak ill of the dead – they vent for them. And people hate the crazy son of a bitch who killed the person, no matter what the other person did beforehand. And anyway, the weird gay kid is not wanted in Logan in the first place. So he can be brutalised and bullied, but he can never be forgiven. Logan is where he is paroled to and it’s where he has to stay until his parole is served. Therefore, he has to endure the constant attempts at being dehumanised, bullied, frightened, and spat at.

There are some wonderful and powerful words, lines, and quotable quotes in When All The World Sleeps. There are also some genuine laugh out loud moments in amongst all the tension. Also, the paradigm shift in Bel’s beliefs is so well written if you don’t think about it you could miss it. From initially believing as he did in the opening quote to having an upgraded attitude and thought process.

Billy’d snuck Bel into The Shack when Bel was still underage. Watching Billy hit on girls who wanted nothing to do with him. Those girls had never dragged Billy into a field and beaten the shit out of him for daring to think he had a chance.
There were no winners here. Not Kenny, not Daniel, and not the law. They were all wanting, every one of them.

Then Bel is placed in a position where there are sides, even though Bel doesn’t see there has to be. He’s still Bel, he just happens to be gay and has his eyes opened. He just happens to fall for “the freak,” Daniel.

While all the secondary characters are rich and vibrant, this book belongs to the beautiful and gut-wrenching love story of Bel and Daniel. They have to work for it 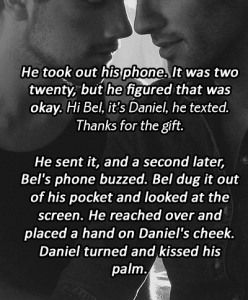 and, believe me, the reader has to work for it as well. It is worth every moment. The fact that Bel always confirms if Daniel is awake for Daniel’s safety, and he will never have sex with Daniel – as others have done – when he is sleepwalking, no matter how uninhibited Daniel becomes, is a testament to who he is. The text messages that form part of Bel’s rules-of-routine that Daniel must send him every day at 2.30 p.m, that Daniel comes to embrace, had the power to make me smile or tear up. The times Bel would just hold Daniel to make him feel safe or talk to him gently were all special to this reader. The sleeping bag, not a straitjacket. Special. But the penultimate was the body art. That was really special and I wanted to scream, “Yes, I bloody well agree!!”

There is so much that could be written in this review, but I can’t cover all the wonderful words, story and events adequately.

When All The World Sleeps makes salient points without hitting the reader over the head – the pack mentality, how hard it is when you are different, how people can be so black and white but then there are those who are willing and able to see shades of grey. The characters and the characterisations are incredible. The subject matter authentic, intriguing and sensitively handled. Bel, what can I say? He is just so compassionate and giving. There are not enough superlatives for him. Daniel: Daniel is a heartbreaker – so much guilt, so haunted, so misunderstood, so gentle, so alone. Until Bel. I cried. I seriously cried for Daniel, I got angry on his behalf as well. And I cheered Bel on and felt his worry. I will never forget Bel and Daniel. Never. I also have to mention the fine calibre of writing. It really is something else – seamless, emotional, sensitive, three dimensional. Those things alone make this a 5 star plus book. If you like books where there is a fair amount of sadness but also tangible hope and love, without being cookie-cutter, if you like your gay romance eading real and raw and observational, then seriously, here is your book. 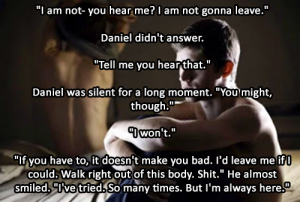 The quotes alone sucked me into Bel and Daniel’s world before I even started reading your review. This looks like such a sad and heartbreaking story, but one with hope.

I can see me falling head over heels in love with Bel. He seems so protective, so caring. My heart would break over and over for Daniel.

I’m not one for books with a lot of angst, but I may have to add this one to my TBR.

This is an amazing book. I have not read J A Rock before and the only other Lisa Henry book I read was not such a good one for me. This book held so much hope with the premise and it absolutely blew me away. Oh yes, if you read this you would want to protect Daniel and you’d love Bel.

Nice review. I have to ask, how hawt?

Hmm…good question. There isn’t a ton of sex in the book. It builds and when it happens it is hot and Bel has a way of talking just right. That’s the best way I can describe it, Jay.

This is a fantastic read, I know Lisa Henry has co-authored on this one but every book I’ve read of hers is fantastic and this is no exception

Literary wise, Lisa Henry and I didn’t hit if off when I read my first book of hers, but since them she has totally impressed. I absolutely loved this book. Also, Lisa Henry + J A Rock = amazing together it seems. 🙂