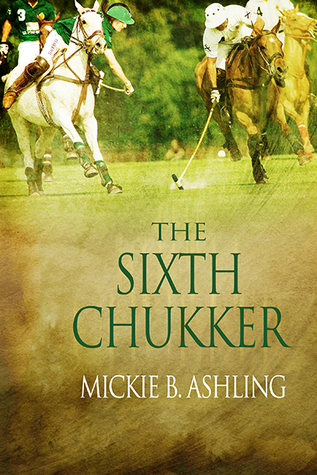 The Sixth Chukker is the third book in the Polo series and releases April 8th from Dreamspinner Press. It continues three years after Ride-Off and fans of the first two novels will be in for a treat as the entire cast of characters—plus one sexy new addition—reunite in this ongoing saga of the Fawkes-Schnell clan. I hope you’ll come along for the ride as retired polo players Preston and Konrad deal with former lovers, demanding children, and old enemies.

Once again, I’d like to thank Cindi and Kazza for giving me an opportunity to appear on their fabulous blog and share this exclusive excerpt of The Sixth Chukker. A special shout-out to my publicist J for her consistent good work in organizing all my blog tours. As usual, I bring a few giveaways, which you’ll find in the Rafflecopter widget.

ABOUT THE SIXTH CHUKKER

Retired polo players Preston Fawkes and Konrad Schnell have finally found the happiness that eluded them for years. Their stud farm is a big success, and their marriage couldn’t be healthier. Unfortunately, this idyllic life is disrupted by several unexpected sources.

Paloma, Preston’s twenty-one-year-old daughter, is determined to be a 10 goal player before she turns thirty. Bandi, Konrad’s son, dreams of starting a family with his partner, Ned Temple. Paloma offers to surrogate if her father and stepfather come out of retirement and team up with her for one season.

Preston and Konrad would do anything to make their children happy, but they’re confronted with a stumbling block. Trauma specialist Dr. Rayne Carlisle refuses to sign off on the necessary paperwork unless Preston agrees to be his submissive for one week.

Caught between the proverbial rock and hard place, Preston and Konrad deal with disgruntled lovers, demanding children, and old enemies in this sequel to Ride-Off.

Ned got up from the comfy spot on his leather sofa and headed toward the sideboard where they kept the cut-glass decanters containing his favorite Lagavulin 16, the single malt whiskey that cured all forms of sickness, real or imaginary. He poured himself two fingers and swallowed it down in one gulp. It burned a hot swath down his throat, making him gag a little. He supposed it was far too early in the day for heavy liquor, but it was handy and he needed something to settle his nerves, which were frayed beyond belief thanks to Paloma Fawkes’s latest bit of trickery.

Ned Temple was a proper Englishman who rarely lost his composure, and certainly never with Bandi, the love of his life and twenty-three years his junior. Their May-December romance had rocked the polo world, and Preston, who’d known and loved Ned for years, had initially had serious misgivings about the union. Ned had been a confirmed bachelor until Konrad’s son, András, affectionately called Bandi, had turned Ned’s orderly life upside down. Born during Konrad’s lost years in Hungary, Bandi was part gypsy, part Texan, and unassumingly gorgeous. As soon as he and his father had walked into Ned’s stable looking for a job, nothing had ever been the same.

They’d fallen madly in love, and the union had generated a host of speculation about gold diggers and the pathetic fools falling into their traps, but the couple had managed to prove everyone wrong. Ned and Bandi were genuinely in love and had discussed parenthood quite extensively after they’d legalized their union. Bandi had willingly stepped away from the polo circuit to become a full-time horse breeder on his and Ned’s estate in Surrey, England. They’d looked into adoption but had decided surrogacy was their preferred choice; however, Paloma’s name had never been brought up as a possible candidate. Until now.

In Ned’s opinion, the surprising offer was blackmail—sugar-coated in good intentions—but emotional extortion nonetheless. Preston’s daughter was using her fertile uterus and willingness to surrogate in exchange for one polo season as Bandi’s partner. With him on board, it would be much easier to persuade her father, and his partner, Konrad, to complete the foursome. She was aware that without Preston, they’d have no team. He was the 10 goal player with a reputation that continued to be talked about long after he’d retired. News of his reemergence would generate excitement, and the eyes and ears of the polo world would fall on every member of the team. Paloma’s star could possibly shine as brightly as her father’s if she managed to pull this off. By offering to surrogate, she was guaranteed her father and Konrad’s support—or so she thought. It would never occur to her that anyone would turn her down. Ned and Bandi had been dreaming of starting a family and were actively looking for a surrogate. Why not take advantage of her generous offer when she wanted so little in exchange? Ned snorted with derision. He could almost see her arguing in her accented English. Why not indeed?

Preston’s daughter was nothing but a spoiled brat, albeit beautiful and insanely talented on the turf, but she was reckless, selfish, and amoral, much like her father in his heyday. She would use anything and anyone to get her way, and at the moment, Ned stood between her and success. She was determined to achieve the highest ranking before she hit thirty. An impossible task according to everyone in the know, but the Argentinian-American beauty couldn’t be persuaded to let time and experience speak for itself. She wanted to jump-start her rise to the Hall of Fame, and if sacrificing a little DNA was part of the bargain, she’d do it. Paloma argued that she was more than capable, and if they were being honest, they’d admit she was right.

Looking over at Bandi, who was waiting expectantly, Ned reluctantly shot down the proposal. “My answer to this preposterous suggestion is a resounding no. Absolutely not.” 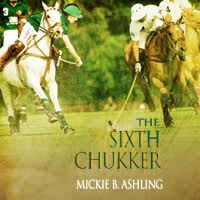 Four lucky blog tour participants will win a $15 Dreamspinner Press gift certificate OR one ecopy of The Sixth Chukker, Ride-Off, or Fire Horse. Contest open internationally. Must be 18 or older to enter.

April 4 – On Top Down Under Book Reviews

Thank you for hosting my blog tour! Much appreciated.

Lovely to have Mickie B Ashling back on the blog. Oh how I love horses and polo. It sounds wonderful 🙂

Thanks, Kazza! I hope you get a chance to read the series one day.

It’s always a pleasure having Mickie B. Ashling stop by! What a beautiful cover and the series looks amazing.

I haven’t read Mickie B Ashling before but it sure sounds interesting. 🙂 Thank you for letting me know about so many writers I’m just learning about. There’s a lot of books out there to get reading.

This book sounds like quite a ride! And Preston’s daughter does not come off too well in the excerpt. 😉

Thank you for another excerpt! It seems like there might be some troublesome characters in this one.

This looks like a great series! I can’t wait to check it out.

Great excerpt. That cover is beautiful. I look forward to jumping into the series.

I luv polo and all things horse related. The books look good.

I really enjoyed the previous two books in the series, so it’s exciting to find out about the new book.

Congrats on the new release! Quite frankly, I’d tell them all to take a flying leap and hire a surrogate.

I love the cover! Thanks for sharing 🙂

I haven’t started this series yet, but the blurb and descriptions of characters there interest me; going to go back and look for book #1.

I found Paloma intriguing in the earlier installments, so this will be fun!

Thank you so much for the chance to win!

I’ve never read a book on polo players before… I’m always in for new topics, and The Sixth Chukker sounds so good!

Thank you for this post and congratulations on the release.

I wanted to stop by and say thank you to those of you who’ve visited during this blog tour. I’ve enjoyed reading all the comments. Preston’s daughter is his mirror image and anyone who has read Fire Horse can anticipate the same mercurial, hard-to-resist personality. I’d love to hear back from y’all once you’ve had a chance to read the book.

I cannot wait to read this series and I am intrigued to find out more, after reading the excerpt. Thank you for an excellent giveaway