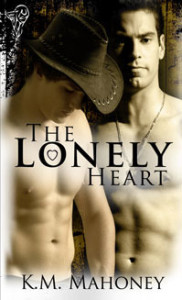 An good story about two very stubborn cowboys and an adorable ten-year-old boy who battle bigoted townsfolk… and each other… to become a family and find their happily ever after.

Isaiah Preston has worked for Dillon Grady (who goes by Grady) for eight years as the foreman and business manager at Grady’s large ranch. He has secretly lusted after his boss the entire time but has never acted on it or even shown Grady any hint of interest.  Isaiah is there to do his job and do his job well.  If he secretly wants… and might actually be in love with.. his boss who else has to know?  As long as he does his job everyone is happy. What Isaiah doesn’t know is that during the entire eight years, Grady has secretly wanted and loved him as well. While Isaiah is a bit outgoing and personable, Grady is not.  He does not know how to be sociable and he is totally clueless as to how to act around other people.  He is seen by his employees as grumpy, quiet and moody.  What those employees don’t know is that Grady has reasons for his lack of social skills and if it was up to him, he would be as openly friendly as they are.  He simply does not know how.

Isaiah gets a phone call that will change his life forever.  His former stepmother (whom he had only met once or twice years earlier before the death of his father) has been killed in accident and Isaiah was named in her will as the guardian of her ten-year-old son, Josh, Isaiah’s half-brother.  Isaiah had never been told that he had a brother and the fact that he did comes as a huge shock.  Shocked or not, Isaiah knows that he will take his little brother in and make sure he has a good home.  Isaiah gets over the surprise of having a brother only to be surprised again when he meets Josh and finds out that the child is mute.  He can hear fine but is unable to speak due to an accident when he was younger. Knowing this will be a challenge at the ranch Isaiah speaks with Grady who tells him to bring the boy home and the rest will sort itself out. Sort itself out, it does.  🙂

Josh is a total sweetheart.  All who know my reading habits and the types of books I read are very much aware of the fact that I simply adore books with children in them… if the children are written well.  Josh is definitely written well.  He may not be able to speak but he has no problem at all communicating.  He is a very happy child who immediately fits in at the ranch with his brother, Grady, and the ranch employees. He is written as a typical ten-year-old and is not played up as being too grown for his age or too young.  Kudos to the author for the way Josh is written.  He is simply adorable and I found myself smiling often at some of his antics.

I mentioned at the top of the review that Isaiah and Grady are stubborn.  That word is not strong enough for these two guys…. mainly Grady. He walks away instead of allowing his feelings to show.  Isaiah tries talking to him and he shuts down.  He moves Isaiah and Josh into his home (from the bunkhouse) so that Josh will have a stable place to live.  As soon as he and Isaiah start getting closer…. as friends… he gets grumpy and pulls away.  The lack of communication between these two was extremely frustrating at times.  Luckily they finally begin communicating (though not always verbally 🙂  and their relationship is FINALLY given a chance.

This is a book about two cowboys on a ranch so it would not be complete (in my reading experience) without at least one homophobe thrown into the mix.  In this case, it is a town with not just homophobes but violent bullies who attack Grady simply for keeping Isaiah, an openly gay man, in his employ.  Grady’s sexuality is guessed at but not confirmed so the attacks are all about Isaiah.  This is where I had one of my few issues with this book.  For once, I would love to read a book set on a ranch with sexy cowboys and not read about the bigots who are trying to run them out of town.  In this book, the townsfolk go farther than the bullying and slurs.  They try to have Josh removed from the home because they do not agree with Isaiah’s (and later, Grady’s) lifestyle..  I was impressed with the resolution in regards to that. However, I would have loved to have read details instead of being told what happened off-page.

Overall, a really good love story between Isaiah and Grady.  This book is all about making a family which is one of my favorite things in the world to read about.  The cowboys (and the sex) are hot, the secondary characters (with the exception of the townsfolk) are all accepting and funny and Josh is an absolute treat.  I recommend this for those looking for a nice love story about two stubborn men who have to fight like hell to get their happily ever after…. but it’s worth it in the end.