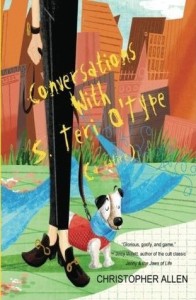 By far one of the most entertaining books I have ever read.

Note that this book is a satire.   I am in no way making fun of gay people.  The book should be taken as it is written… in fun. The book was written by a gay man who obviously has an amazing sense of humor. Keep that in mind before reading the review.

Curt Child is a 45-year-old gay man. He doesn’t look gay.  He doesn’t dress gay.  He doesn’t talk gay.  He knows nothing about gay culture or any culture at all really.  He has a job as an accountant (or accounter). He’s a tad overweight (only 5 pounds!) and his hair is thinning.  His best friends are named Boss, Ed, Ed, and Ed.  He has no fashion sense.  He knows nothing about movies or music and he wouldn’t know a gay icon if he was hit in the head with one.  Curt wants to meet the man of his dreams but how can he do that when no one can tell he’s gay? So he goes to his old ‘college roommate’, Teri, and asks him for lessons on how to be a proper gay man.

S. Teri O’Type (or Teri) is extremely flamboyant and has never seen the inside of a closet unless it was to remove one of his fabulous outfits. He is nine-fourths Irish and he owns a gay dog (that I swear is part human) named Cary Grant who has gaydoggiedar.  Teri is a self-described gayru who makes it his mission over a period of months to turn Curt into a proper gay man.  This is not an easy task as Curt literally has no clue how to act gay.  He watches football and drinks beer with his above-mentioned friends. How can he appear to be a gay man when he enjoys such non-gay things?

Curt begins weekly lessons in Greater Gayness with his flamboyant friend.  Teri makes it his mission to teach Curt everything there is to know about gaytuition, sexosophy, gaygiene, gayspectations, and becoming gaythin with a gaycoif and he wishes to do this in a homosecond!  Of course, first Curt must learn the homocabulary but he is dysfagtional so leading Curt to Greater Gayness seems an impossible task to poor Teri and Cary Grant.  Curt must at all times call Teri Oh! Mighty Gayru! … or OMG for short.  But Curt is a Curtastrophe  and is redraculous so the task seems insurmountable.

“Yes, well:  Sweet is gay … and dumb is gay, but sweet divided by dumb equals nineteen-year-old bubba.  Do you see?”

“Hell hath no fury like a gay doggie scorned!”

“We in the O’Type family are always nine-fourths cleaner, funnier and more depressed than our heterosexual counterparts.”

“Cute little girlfriend does not a straight boy make.”

… and my absolute favorite in the book…….. (referring to a man… a stranger.., who skipped a belt loop when he put his belt on)….

“Skipping a loop intentionally could be a sign that he’s in a gang or… or from Texas… or both!” Teri gasps.

“Top banana!  But, now let’s assume he’s neither in a gang or from a foreign country —“

“Curt!” The thwack! of a dominatrix’s riding crop stings the coffee table a millimeter from my pinky.

“Your boy at the post office was just another hapless, nineteen-year-old baseball cap!”

I could go on but I would be here all day if I typed every funny thing in this book.  I have never highlighted on my Kindle as much as I did with this… starting from the very first page.  I started laughing immediately and did not stop until THE END.

While this is a very funny book and I have to say that Teri has to be one of the most amazing flamboyant gay characters I have ever read about, I have to say that this book also teaches a very important lesson.  Teri’s lessons in Greater Gayness are literally hilarious and I found myself giggling quite a bit watching Teri trying to teach Curt the correct way to be gay.   You will realize a bit in to the book that things aren’t all as they appear.  You must allow yourself to suspend belief quite a bit in order to understand where the author is coming from (it is a satire). While the entire book is centered around Curt trying to learn (without success) how to be a certain way, in reality it is teaching all to simply be yourself and not try to live up to certain stereotypical expectations.

You will laugh with Teri and you will fall in love with Cary Grant.  You will watch as Curt finally realizes (bittersweetly) that one does not have to change himself in order to have what… and who… he wants.

This was a very, VERY entertaining read for me.  It takes a lot for a book to get to me as this one obviously did.  I read a lot and it is rare to find that gem that stands out from the pack.  Conversations with S. Teri O’Type definitely stands out.  I had barely gotten into 20% of the book before I was already a fan of this author on Goodreads and a follower on his blog.

I can’t recommend this book enough. It is simply brilliant. By far one of the most entertaining I’ve ever read.  My apologies to the author if I made mistakes in the use of his homocabulary.

The cover is perfect.   Oh, and Curt?  He does finally meet the man of his dreams… a man named ED.  🙂