The Fox, the Dog, and the King (The Cassie Tam Files #2), Matt Doyle 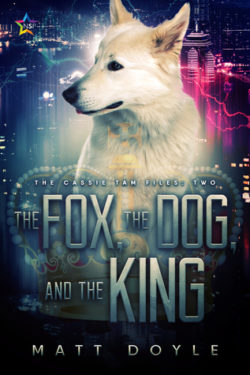 New Hopeland City may have been built to be the centerpiece of the technological age, but some remnants of the old world still linger. The tools of the trade have changed, but the corruption remains the same, even in the criminal underworld …

When PI Cassie Tam and her girlfriend Lori try to make up for their recent busy schedules with a night out at the theatre to watch the Tech Shift performer Kitsune, the last thing they expected was for Cassie to get a job offer. But some people are never off the clock, and by the end of the evening, Cassie has been drawn into a mundane but highly paid missing pet case. Unfortunately, in New Hopeland City, even something as simple as little lost dog can lead you down some dark paths.

Until now, Cassie wasn’t aware that there even was a rabbit hole, let alone how far down it goes.

Book #2 picks up approximately two months along from Addict, book #1 in the Cassie Tam Files. Cassie is now with Lori, a client from the first book, although she’s questioning if the word girlfriend fits what they have. Cassie is a bit insular and not too fond of commitment or the lovey-dovey side of life. She’d be a hard girlfriend to love but she’s a good MC for the series. She’s also still unsure about tech shifters, there are different types: Furries, Fetishists, and Freaks. Lori invites Cassie to a show featuring the latest tech shifter sensation, Kitsune – a gender non-binary fox shifter /performance artist – so Cassie is loosening up a bit. Besides, Lori is also Ink, a panther tech shifter in her down time. At the performance, Kitsune recognises Cassie and asks for her to come backstage after the show. Because Cassie has a reputation as a reputable and good PI she’s more in demand now. She also finds herself hired on the spot as the PI for Kitsune’s missing and beloved American Shepherd, Fish. Kitsune believes that Fish was dognapped but doesn’t know for sure. Cassie feels a bit backed into a corner about it all after Lori agreed on her behalf to take the case, but $10K for a missing dog is good money, even if she has to sign a lot of waivers regarding Kitsune’s identity.

Cassie is still friends with her ex, Charlie. I can’t help but wonder if she has more feelings for Charlie than Lori. Well, as many feelings as Cassie allows in. Charlie, short for Charlotte, is one of the top synth dealers, an Elite, in New Hopeland. Not too many people in this city are one way or the other, there is a moral ambiguity surrounding a few. 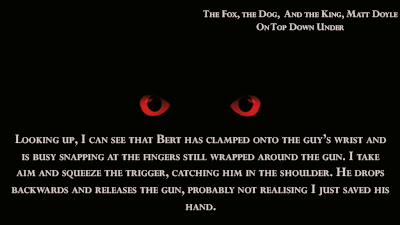 I was so glad that Burt was back in this book. Bert is an AI gargoyle and familiar of Cassie’s. His Caw and dogged determination in protecting and helping her endeared Bert to me in the first book, and nothing’s changed here. I’m still Bert’s #1 fan. One of the great things about book #2, in my opinion, is that Bert gets more page time. He may be an AI gargoyle but he reminds me of a cross between a paranormal style gargoyle and Mr Chester, a minor celebrity Gang-Gang (parrot) in Australia – that’s exactly how I picture Bert.

“Caw?” Bert asks, and I let my eyes drift down far enough to see that he’s taken up residence opposite me. He must have picked up on my mood.
“I’m just tired,” I reply. “Nothing to worry about.”
Bert lets out a mechanical chirp, and hunkers down into a more relaxed pose.

Where I got nervous about reading this book was the element of a dog fighting ring. I am not good with animal cruelty and generally bypass books that contain anything where an animal is harmed. I didn’t know going in that there could have been dog fighting so it had me a bit edgy. Matt Doyle manages to make it part of the overall story  while skirting around that fighting aspect. Cassie is an animal lover and jumps in to make sure nothing untoward happens on her watch. Crisis averted for me.

“New Hopeland works.” Fuerza waits patiently for me to continue and, when it becomes clear I’m not going to, he bursts out laughing. “That’s it? Your entire argument is just three words?”

This book is not heavy on action there is more subtlety given to the characters and the plot. Cassie is developed somewhat more. The world building is not bad and the story rolls along toward a bit of action and an interesting… standoff – I can’t say anything more as it would be a spoiler. One thing’s for sure, Cassie stands her ground while making sure her arse is cleverly covered. During The Fox, the Dog, and the King, Cassie finds the dog-nappings, and there seems to have been a few, and a link with an internal Mafia-like power struggle all going on within the New Hopeland Underground. Perhaps some people think they can outsmart the wrong people. There is also the problem that if she puts things together and knows too much, it could be deleterious to her health and safety. She also isn’t happy the way Lori jumped on the case with Kitsune and left Cassie in little to no position to say no. I see both of their POV and both mean well. However, this book is not romance driven, it just happens to be that Cassie is lesbian and has an ex and a current girlfriend in the picture, and the very most that happens is a pretty chaste kiss. Most people have relationships at some stage in their life, and this series simply reflects that. The overall series, however, is really about tech, a futuristic world where Cassie’s carries out her PI work, solving cases in and around New Hopeland, and the people she works with on occasion.

Right now, Fuerza is using me as a gofer. Not only that, but my earlier conversation with Sunglasses made it quite clear that he likes to manipulate situations more than I gave him credit for. I reserve my right to torment anyone who thinks they can use me, even if they are paying me for the privilege.

The description of the tech shifters at the back of this book is unbelievably good, including diagrams. I have never been a geeky person myself, but the attention to and eye for detail was totally ingenious by Matt Doyle.

If you like the idea of a futuristic tech world, one with a lesbian MC who investigates with her trusty AI gargoyle and the assistance of a few friends, a place where the shifters are of a tech nature, this is a nice, cruisy series with no chest thumping or loud-mouth characters. Very enjoyable reading. I look forward to book #3 in the Cassie Tam Files.  4 Stars!

This looks really good. I love Mr. Chester. 🙂 Romance being center isn’t always necessary in what I read. Give me a little action and mystery and I’m sucked in.

Thanks, Cindi. I pretty much always enjoy a bit of mystery and I do appreciate a female PI MC.