The Boys of Summer, Sarah Madison 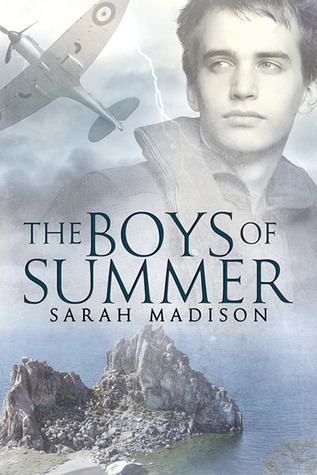 Somehow you got under my skin when I wasn’t looking.

David McIntyre lives in California but is currently in Hawai scouting movie and ad sites for studios and clients. When David is in Hawaii he always uses Rick Sutton as his pilot. Rick knows his way around Hawaii and if Rick tells him one place isn’t what he is looking for, David knows that he will be spot on. David also fancies the sexy and enigmatic pilot-of-few-words. But David doesn’t know Rick’s sexual orientation. He can always hope, though. So, Rick is showing David some interesting locations for some upcoming projects when they hit trouble in the shape of a storm and the plane goes down. Rick is a good pilot and manages to get them down alive, but not without injury. Rick has sustained a nasty wound to his arm and is bleeding quite profusely. David has a knock to the head which is nothing in comparison to Rick, but Rick is nothing if not tough. There is a first aid supply kit onboard the plane and a bottle of alcohol. And David has aspirin with him. He patches Rick up as best he can and, after their first night huddled under a thermal blanket, they set out to see what is on the island that can sustain them.  Unfortunately, the plane’s radio is out, and while Rick has a beacon it isn’t an up-to-date piece of technology. So they have to rely on the fact that though they have been taken off course Rick has filed a flight plan.

The first part of this book sets up characters. How they know each other through David’s repeat business with Rick. David is chatty and Rick is anything but. David sees so much in life relating back to movies and Rick thinks David watches too many movies. It also deals with the plane crash, the injury Rick has, which is not improving in the heat and tropical conditions, looking for food, water, and somewhere to sleep out of the elements. David learns that Rick used to be an air force pilot, but wasn’t honourably discharged after fifteen years service during – and due to – DADT. That is one question answered, Rick is gay – bad timing for the information though. While out scouting the island they come across a small cluster of old buildings and a landing strip. At first David thinks it may be used for smuggling, but on closer inspection it seems like this was an outpost used in WWII. There are a number of invaluable items they find, including bedding, and there is a pump to a water supply. During this part of the book it gives the reader an insight into the two different personalities of the protagonists very well.

From approximately the 34% mark to the 67% mark of this book The Boys of Summer becomes a dream that David has which involves WWII in London. David is at Bletchley Park working on cracking code and encryption of the German Enigma machine. Everyone David knows in his current life is someone in his dream, including Rick Sutton. Rick, or Sutts, is a pilot in England during some of the darkest periods for bomber pilots. When young men went out quickly and didn’t come back even quicker. David and Rick become acquainted when David goes to a local pub and they meet under less than ideal circumstances. But pretty soon they develop more than a friendship and become lovers –

There was no cure for Sutt. For the first time in his life, David completely understood the concept of addiction. The inability to live without something that was bad for you. The total lack of resistance when it came to quitting the thing you knew would inevitably destroy you.

I really loved this part of the book. If it could all have been set during WWII I would have given The Boys of Summer 5 rock solid stars. The setting was good, the characters wonderful, and I have to admit to needing a tissue as I read. I won’t give much away but if dreams normally bother you in books, and they can definitely bother me, maybe think about whether to read it or not. But, for what it’s worth, I felt is was so well integrated into the story that it made the book even better for having been written this way.

When David awakens from his dream things are not looking good for Rick; he has a fever, is having on and off febrile hallucinations – thinking he is back in a warzone – and his arm wound is looking every bit the infected mess it is. David makes sure that the material they both gathered and organised before Rick had deteriorated is well organised as a marker and ready for a fire. From here it is waiting for someone to rescue them and then what will happen to the men post rescue. Will Rick be okay? If so, will there be a relationship for the two men? If so, how will that be able to happen.

I would not hesitate to recommend The Boys of Summer for M/M lovers of contemporary and historical writing.  It is primarily a contemporary read with a portion that is set in a dream that just happens to be in an historical setting. It fit the characters and the situation they found themselves in. And it is a very   clever mix. The book has clearly delineated voices and characters, good historical aspects – not just some thrown together lip service to WWII, nor was the historical part boring or heavy. The sex to plot ratio was perfect for the story – no one was gallivanting around the island after a plane crash having sex, yet there is sex in the book and it is really well written and rather hot I might add. There was action, tension and a truly lovely romance. In both the contemporary parts of the book and the dream, neither man broke character. That is good writing from the author. I thoroughly enjoyed the Boys of Summer and based on this book I have already earmarked several more Sarah Madison books to read.

This book was supplied to me by the author in return for a fair and honest review.

This looks like a very good book. Normally I’m funny about dream sequences or flashbacks in books (you know this) but I do love reading about WWII and I could see me loving this one. It looks as if the historical and contemporary parts are written very well. I will definitely be adding this to my list.

Great review and I love the picture.

I know exactly what you mean about the dreams. I’m a bit funny about it too…unless it is done right. It is definitely done right here. Good author and I have two more of hers that sound really good on my TBR now.
Thanks Cindi 😀

I literally just came across your review’s link on Goodreads and I’m delighted! Thank you! Your review really made me smile and it was exactly the sort of encouraging feedback I needed right now. You’ve really made the weekend for me. 🙂

This is a really strong piece of writing, Sarah. Just lovely. I thoroughly enjoyed my time spent with David and Rick 😀

On Top Down Under gives The Boys of Summer a 4.5 star review! | Sarah Madison Fiction

The Boys of Summer is BOM at On Top Down Under Reviews! | Sarah Madison Fiction

[…] of reviewer Kazza K’s Book of the Month Choices for August at On Top Down Under Reviews! The review for the story is here–do check it out! I can’t tell you how pleased I […]

[…] of Summer and based on this book I have already earmarked several more Sarah Madison books to read. Kazza K’s If you re headed to the beach and can only take one book with you, it should be this one. Highly […]

Thanks for the review. I’ve not read this book. o/\o