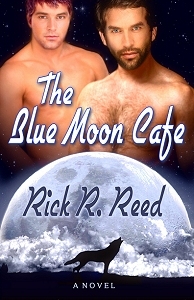 When you pick up a Rick R. Reed book you never know what you are going to get.  You may get a sweet romance (Beau and the Beast) or you may get a horror or thriller type book that keeps you on the edge of your seat.  With The Blue Moon Cafe you get both, though not necessarily in the traditional sense.  My love for this author’s work actually started as a result of discovering his horror stories several months ago.  Surprising to some, I’m sure, as I tend to lean more toward romance these days.  My real love, however, will always be thrillers with a tad of romance thrown in. The Blue Moon Cafe gave me exactly what I was hoping for with the edge-of-your-seat-not-able-to-put-my-Kindle-down thriller as well as a romance or two.

Thad Matthews has no job and no partner. There are no prospects for either.  The only constant in his life (other than the grind of constantly looking for employment) is his Chihuahua, Edith.  My blog partner has joked with me over my books with cute or funny animals in them and in this one we have Edith.  Edith is the queen of the household and lets Thad know it.  Unfortunately, Thad needs more than love from his dog. He needs to be around people so he decides to treat himself to a nice dinner.  Plans made, hair and clothes just so (because you never know when you might meet the one), Thad makes his way to a new restaurant, The Blue Moon Cafe. Once inside his attention is immediately drawn to the sexy bartender.  The sexy bartender who catches him staring and with one look lets Thad know that he is definitely barking up the wrong tree. Moments later, the bartender is forgotten. The moment the owner and head chef walks in the room Thad is head over heels in lust.

Sam Lupino has not long been in the United States and has only recently gotten his footing with his new restaurant, The Blue Moon Cafe.  His life is not normal in any way, shape or form so the last thing he needs to be doing is starting any type of relationship.  Seeing Thad Matthews changes that.  All it takes is one look and he knows that he will have that man, in bed and out.  A couple of hours of flirting and Thad eating the best meal of his life eventually turns into a night of hot, rough sex in Thad’s apartment.  Thad wants more as there was definitely a connection between him and Sam that went far beyond sex.  But when he wakes up the next morning, he is quickly put in his place in regards to having any type of future relationship with Sam, sexual or otherwise.

This book starts out with a prologue that takes you inside the mind of a killer.  If you have read this author’s horror before, you are aware that he does not shy away from details, graphic or otherwise. That is the case here.  The reader is witness to the thoughts and actions of one who will stop at nothing to catch and destroy his prey.  The word “creepy” fits here as you know the monster will strike but you don’t know the when or the whom.  You actually go inside the mind of the killer often as every few chapters the killer kills again.  Each time the reader is privy to his/her thoughts and actions.  Only later do you discover that the killer is, in fact, a werewolf.  A werewolf who will stop at nothing to destroy one gay man at a time during the full moon.  I don’t believe I am giving anything away here as the cover alone states enough for a future reader to get the gist of what the story is about.

Sam disappears after a night of intense sex.  Thad’s heart is broken as he would have never dreamed that it was only a one-night-stand for Sam.  Only later and as a result of a strange coincidence do the two men reconnect. This leads to a relationship of sorts with Thad even meeting Sam’s family.  His family that includes a son, Domenic, and a sister, Graziela and various other relatives.  Sam and Thad grow to love each other deeply and the sex is every bit as intense and wild as it was that first night.  But odd things are happening and Thad is convinced that Sam is part of it.  Gay men are being ripped apart and eaten by some being during the full moon.  The full moon also coincides with Sam and his family disappearing for a day or two each month.  Then there are dreams that plague Thad, dreams so disturbing that he wakes up shaking.  Each dream is about Sam, Thad has no doubt. Thad begs Sam to talk to him, to tell him things about his life, his family.  Sam refuses.  Not only refuses but outright lies.  It is when Sam is caught in one of his lies that Thad ultimately walks away and begins to lean more on another male friend, Jared.

Jared is a volunteer at Lifelong AIDS Alliance, which provides food and assistance to those living with HIV and AIDS.  After Sam’s initial disappearance the first night, Thad is unable to get him out of his mind so weeks later he volunteers at the Alliance in hopes of having something else to occupy himself with.  For the first time in a long while, Sam is not consuming Thad’s every thought.  Another man is looking at him and wanting him and he strongly considers taking Jared up on what he is obviously offering.  Moments after the two meet, Thad is asked by Jared to place calls to local businesses for donations for the center.  The strange coincidence I mention above? One of those businesses is The Blue Moon Cafe.  Sam answers the phone and Thad is immediately thrust right back into Sam’s world after trying for weeks to pull out of it. He and Jared still go out for drinks and conversation but Thad refuses to take it any further as he is still hung up on Sam.  A close friendship develops between Jared and Thad.  Jared obviously wants more but until Sam is out of the picture that will not happen for Thad, even if each day Thad is beginning to see Jared in a different light.

The killings continue.  Thad and Jared gradually grow closer, even more so when Jared is a witness to one of the full moon killings.  Sam continues his secrecy and as a result pushes Thad farther away, a man he claims to love. Thad is torn.  He knows he loves Sam but he is seeing Jared as possible partner material though Jared is very aware of Sam’s role in Thad’s life. Only later when Sam’s secrets are revealed (in a big way) is Thad forced to make a decision in regards to the relationship.

The killer’s identity did not surprise me as the clues were there all along, nor did the reasoning behind the killings. When you read one of Rick’s books you really have to pay attention to details or you might miss something that is staring you in the face.  Thankfully I picked up on the clues early.  What did surprise me was what came later with another character.  I did not see that coming even when again, the clues were there early had I really looked at them.

I try not to read a lot of reviews before I read a book.  Even those who mean to keep spoilers out may miss something (I’m guilty of that myself) so I wait until after I finish a book before checking out the opinions of others. Once again, I am glad that I waited.  One particular comment could have ruined this book for me.  When you read a book by this author you should always expect the unexpected.  You may not get the ending that you hope for or you may.  That depends on the person doing the reading.  Sometimes you have to take a step back and think.  I had to do that with this book.  I was not pleased with how specific things played out so I knew to walk away before attempting my review.  I am glad I did.  Everything that happens in the resolution of the story is laid out little by little throughout the telling of the story.  What comes as a surprise really shouldn’t.  The more I thought about it (and I waited hours before typing this review) the more I realized that it could not have ended any other way.  The writing is classic Rick R. Reed so one should expect surprises, even those surprises that may not please the reader.  Do I wish the author would have gone a different direction at times?  Absolutely.  But after giving it some serious thought, I realized that the book had to end the way it did.  However, I do hope to see these guys revisited some day.

There is a lot more I could say in this review but I won’t.  But I will say that if you plan to read this book (or any of his really) be prepared.  You might not get what you are hoping for but then again, you may. You may think you know what is about to happen but I can assure you that you will be wrong.  Again, expect the unexpected.  Once again Rick R. Reed has woven a tale so creepy and brilliant that once I began reading I did not want to put my Kindle down for even a little while. Another outstanding book by one of my favorites.