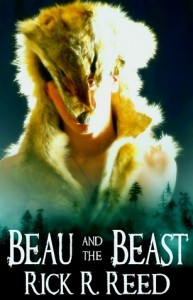 I am all about good romance and Beau and the Beast is the ultimate romance story.  Beau is a homeless artist living on the streets of Seattle. He draws portraits of tourists, receiving next to nothing in return.  His work has been complimented and more than once he has heard the words “… it’s like you captured my very soul.”  He has the talent to do more but he wishes to be free.  Free of scheduled demands that require having a boss and someone dictating his life.  Some days he manages to make enough money for a hot meal and a roof over his head for the night. Other days he is not so lucky.

He hoped for the added bonus of a little something extra to lessen the aching emptiness of his belly.  The reality of the term ‘starving artist’ was not lost on poor Beau.

It is on a not so lucky day when he is attacked by gay bashers.  He is beaten and left for dead and robbed of his few meager belongings. Those belongings being his art supplies.  When he wakes up after the attack, he is in a beautiful bedroom with his head bandaged. He has no memory of the details of the attack or how he ended up where he is, wherever that may be.

When Beau awakened, he wondered if he had arrived in heaven. No, there were no angels strumming harps, clouds underfoot, or St. Peter standing at the pearly Gates.

But what was before his eyes was something unexpected and something well, plush beyond Beau’s wildest imaginings.

Only later does he meet the person who saved him during his attack.  The man is wearing a wolf mask but Beau is able to see the beauty of his green eyes underneath.  The man takes good care of Beau but he is hesitant to speak or say anything about himself with the exception of telling Beau to call him Beast.  Eventually he speaks and Beau is eager to learn everything there is to know about his savior.  Why does he wear a mask?  What happened to him? Why is he so sad? Why does he live in such a remote location? It takes awhile but eventually Beau is able to see the man behind the mask.  There are scars from a horrific injury and those scars are why he calls himself Beast. His real name is Jeanne-Marie but he sees himself as a beast because of his scars.  Beau, on the other hand, sees a beautiful person on the inside only Jeanne-Marie refuses to believe that someone could want him with his deformed face.  It only takes a little while for Beau to know that he has fallen in love with Jeanne-Marie.  Jeanne-Marie, on the other hand, knows better than to get too close to someone.  He was destroyed in the past by a previous lover and he feels in his sad and lonely heart that he is not worthy of love from another man and he pushes Beau away. Beau sets out to change his mind.

“Why can he understand that I’ve fallen in love with him, real love, true love, the kind that sees beyond the physical?  Didn’t our lovemaking make that clear?”

The ending is perfect.  I’m not going to give it away but it was the ultimate ending for such an amazing short story. Beau and the Beast tells the story of falling in love with someone because of what is on the inside, not out.  My heart broke a little for both Jeanne-Marie and Beau but for different reasons.  Jeanne-Marie, because he felt unworthy of love and was destined to be alone. Beau, because of his sad situation of homelessness early on, on top of his vicious attack.

The story is short (only 60-something pages) but so much is said in so few words.  There was nothing missing nor did I feel that more should have been added.  It is absolutely perfect as is.

Another great story by one of my favorite authors.