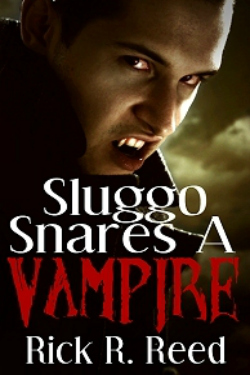 Purchase At:  – No longer available.

When Sluggo cruises online chat rooms, he isn’t looking for a hook-up, he’s looking for love. But love has a way of being elusive, especially when you’re not being honest. Presenting himself as “Sir Raven,” Sluggo promises his chat room cohorts he is the “master of the night.”

And then he meets someone who challenges him–someone who claims the title, “master of the night” as his own. TepesAllure’s enigmatic and flirtatious messages to Sluggo start out as fun banter, but quickly turn to eerie disquiet.

How does TepesAllure know so much about Sluggo’s life? How can he know–without even a picture to go on–what Sluggo looks like? And what’s all this about an age numbering in the centuries and a curious taste for blood?

Has Sluggo snared a vampire? Or has the vampire snared him? As the night unfolds, so do the advances of TepesAllure…and even when Sluggo tries to escape, he finds that getting out is not nearly as easy as getting in.

But to make their online connection real, TepesAllure needs Sluggo to invite him in. Will Sluggo succumb to Tepes’ allure? And will the man of his dreams turn out to be a nightmare?

This short story was just what I needed today. Anytime I’m at a loss over what to read next, I know I can usually find exactly what I’m looking for with a Rick R. Reed book. That was definitely the case with Sluggo Snares a Vampire.

Sluggo, as the blurb states, spends entirely too much time online on gay hook-up sites. Oh, he’s not actually looking to hook-up with these guys sexually. He just loves the fantasy of being someone totally different with these people than he is in the real world. Sure, he’d love to find real love someday, but he’s not exactly sociable and the man he is online? Let’s just say the description he puts out there is nowhere near how he looks in the real world. Online he is Sir Raven, the master of the night. He’s built, he’s hung and he’s hot. Again, totally unlike Sluggo when he’s not cruising chat rooms on his computer. 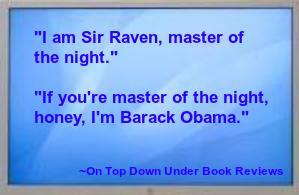 After a night of again being unable to sleep, he keeps getting pulled back to his computer. He knows he shouldn’t log on. He has to go to work the next morning after all. Of course he logs onto his computer anyway. He goes into a chat room and identifies himself as Sir Raven, master of the night, as is his norm. Well, about that…. There’s another man in the chat room, TepesAllure, who claims to actually be the master of the night. One private message after another with this man and Sluggo is seriously getting creeped out. How does TepesAllure know so much about him? He’s gone to great lengths to keep his online persona completely away from his real one, but this guy knows his real name, what he looks like and a few other things he doesn’t exactly share with folks. When things start getting really creepy, he logs off his computer and goes back to bed only to be awakened by the sound of his computer again.

I can’t say more than that. If I do, I’ll tell the entire story and I refuse to do that. 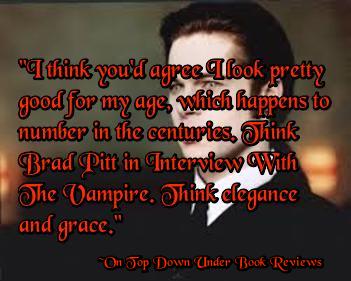 Overall, it was a great, short read and exactly what I needed today. This author has a tendency to have the reader expecting one thing but getting something else entirely. You’ll think you know what’s about to happen, but you’ll be wrong. That’s one of the reasons I keep going back again and again to Rick R. Reed’s books. They are always entertaining and could never be called predictable.

Highly recommended if you’re looking for something quick, a bit creepy, and if you don’t mind stepping a bit outside the norm.

This automatically goes on my TBR pile for a vampire theme and the use of Brad Pitt as Louie.

Love the review, Cindi. I’m going to read this for ‘me’ now you’ve alerted me to it 🙂

I think you’ll really enjoy this book. It’s a quick read, but the reader isn’t left wanting at the end. I loved the ending and how everything played out. Using the Brad Pitt photo (though I admit to not being a fan….) was just a bonus. I did love him in Interview With The Vampire.