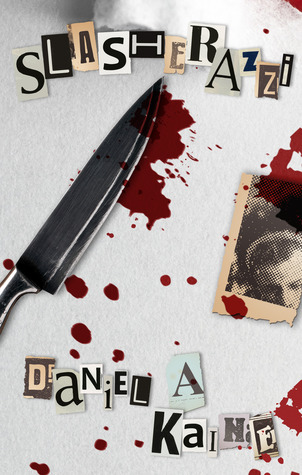 Recently promoted to Detective, Alex is out to prove himself and the Slasherazzi case is the perfect opportunity. Mutilated corpses are showing up across Tampa, and when the team discovers the newest victim was tortured alive, Alex becomes more determined than ever to stop the crazed serial killer before the horrific stabbings escalate further.

With the return of Alex’s ex-boyfriend and journalist, Vince, the investigation takes a dangerous twist: the killer starts showing a personal interest in Alex. Can he stop the murders and salvage his relationship with Vince, or does he risk letting both men get away?

This is one of those “Where do I start?” reviews. I will start out by saying I was blown away by the way everything came together in this book. This review will have no spoilers and I hope that others keep them out of theirs as well. I would have been extremely angry had anyone spoiled this for me.

Death was what I sought, what I craved. It was the ultimate release. But now I had the order right, a part of the learning process like experimenting with which parts to cut, and in what order, to produce the maximum amount of pain and terror. The greater the agony, the greater the climax when death finally came–and so did I.

As the blurb states, Alex has just been promoted and is eager to prove himself as a detective. There is a serial killer on the loose and Alex is put in charge of the investigation. The killer is brutal. The murders are extremely violent and extremely graphic and all is on-page. Keep that in mind if you are squeamish. This is not one of those books where the killings are alluded to. They are laid out for the reader to see every single slice of the knife the killer makes on the victims.

The bodies keep piling up and there is never any evidence left behind. Alex can’t catch a break in the case and then more issues arise when his former boyfriend, Vince, comes back into his life. Vince is a journalist who has been in and out of Alex’s bed for a couple of years. It’s common knowledge that the lead investigator on a case being involved with a journalist (who is trying to make a name for himself) is bad news. As expected in that type of relationship, there are constant problems and constant break-ups. When Vince pushes his way back into Alex’s life, after a particular bad break-up before, there are major trust issues between the two men as Vince had violated Alex’s trust many times in the past. This was done in order to further his own career, almost ending Alex’s in the process. Vince swears everything will be different this time, but will it?

Each new killing is more violent. The serial killer has gone from just killing the victims to torturing them before the final slice of the knife. Before long, it becomes apparent that the killer has Alex in his/her sights.  With the attention on Alex, this makes solving the case even that much more difficult. Then the feds are brought in and this complicates things even more.

The killer was dubbed Slasherazzi by Vince in one of his columns and the name stuck. After each murder, photos are sent to the newspaper before the body has even been discovered by the police. With Alex’s (unknowing) help in the past, Vince has steadily been moving up at the paper, therefore harming the investigation in the process. Or is he?

There is an interesting cast of characters in this book from Alex and Vince to Alex’s partner and others. There is constant guessing when the reader will think they know what is about to happen and then they will get slapped in the face with something else. I admit to being convinced I knew who the killer was throughout. I just knew that I knew who it was and the reasoning behind it. I ended this book with an “A ha!” because I was right. Normally if I figure out the killer early, the rest of the book doesn’t do much for me. That was so not the case with Slasherazzi. I may have known who the bad guy was but the author kept throwing things out there that had me doubting it so I would think “Hmm…. maybe not.” I love the resolution and I absolutely loved the ending. There is much more I could say about this book but I’m not. The last thing I want to do is give anything away.

Overall, this is an outstanding book. It starts with the killer immediately killing someone on the first few pages and the action doesn’t stop. This alternates in first person point of view from Alex to the killer.  I love when an author takes me inside the head of the serial killer and I was not disappointed in this book. My favorite books are books that keep me guessing until the very end. Slasherazzi definitely delivered. I may have figured out who the killer was early on, but nothing could have prepared me for how it all came together and the why of it all.

The relationship between Alex and Vince is an interesting one. The sex is pretty hot and the reader will be hoping for a happily-ever-after for the guys one minute and thinking that maybe they should go their separate ways the next. They are perfect for each other.

Highly recommended if you love a good thriller and you don’t mind more than a little graphic violence. Throw in a bit of romance and you really can’t go wrong with this book.

I am so glad you enjoyed this book because you are a slasher connoisseur and it could have let you down. But it was a cracker from the sounds of your review.

Love the review gives great insight and I’m none the wiser as to who may have done what, so nothing is spoiled for the reader.

Thanks! I made a point in trying to keep spoilers out and I hope others do the same.

I do love a good slasher book and this is a definite Cindi book. I find myself wanting to go back and reread parts of it because of how everything came together. I can so see me doing that.

The resolution is excellent. A great book.

Hey and whoa, the book sounds funky. Which mean I have to read it of course. 😉 You’re quite the slasher lover I see Cindi. I like a good horror-slasher book myself.

Jay, you’d love it. It’s right up your alley I believe.

I do love my slasher books.