Hello, and welcome to my second ever blog tour, celebrating Riptide Publishing’s release of Shadows & Dreams, the sequel to Iron & Velvet. Yay!  Thank you so much to On Top Down Under Book Reviews for hosting me. And, to you, dear reader, for stopping by. If you’d like to come with me and keep me company on my virtual wanderings, you can find a full listing of when and where I am.

There’s also some kind of contest type thing happening.  I had a bit of trouble choosing a prize for this one because most of the things Kate likes (booze, cigarettes, knives, women) are illegal to ship internationally. I thought about a fedora, but then I remembered people had differently shaped heads and there was no point sending somebody an item of clothing they wouldn’t be able to wear. So, basically, that leaves coffee and Bovril and nobody likes Bovril except people from the North East of England. I’m therefore going offer 250g of Jamaican Blue Mountain, the nicest coffee in the known universe, purchased from a wonderful speciality shop, ground or beaned to your specification. If you don’t like coffee, I’ll replace it with an equivalently lovely tea. I’ll also throw in a hard copy of Iron & Velvet (or the other thing I wrote) if that’s the sort of thing you’d like. I can even scribble stuff in it, thus reducing its re-sale value … or,  y’know, not do that. I’ll announce the winner a handful of days after the end of the tour.

The Play Within the Play 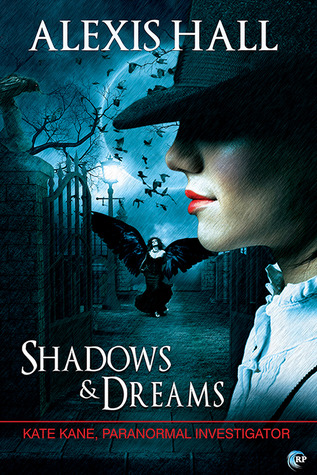 Possibly my favourite scene to write in the whole of Shadows & Dreams is the one in which Kate wangles herself an invitation to somebody’s game of Vampire: the Requiem.

It occurs to me that there will be some readers – possibly a majority of readers – who aren’t familiar with the wonderful world of tabletop role-playing games (“RPGs”). Basically it’s a form of collaborative storytelling in which a bunch of grown-ass adults sit around a dining room table (or, in the bold new world of the twenty-first century, a Google Plus hangout) pretending to be elves, or vampires, or whatever. It’s a broad and diverse hobby of which Dungeons and Dragons is overwhelmingly the most well-known example, but in the 1990s White Wolf publishing’s Vampire: the Masquerade ran a pretty close second.

Vampire: the Masquerade, and its sequel Vampire: the Requiem, cast the players as vampires in a world of intrigues, betrayals, and personal horror. At least in theory. In practice it often casts the players as vampires in a world of slightly tacky in-jokes, media references, and doing arbitrary missions for people who you would think would be much better placed to do them themselves. The vampire canon in the Kate Kane series owes a certain amount to ideas I picked up from those games in the late ’90s (“prince” as a gender-neutral title for powerful vampires, stakes that paralyse rather than kill – although you can argue for that one going back to Dracula). The Vampire: the Requiem scene in Shadows & Dreams is a tribute to every RPG I ever played in university.

When it came to writing the Kate Kane series, I found that I drew on my years of playing and running RPGs far more than I’d expected. A tabletop role-playing game is an open-ended environment in which the players control the pace and pattern of exploration. This pretty much requires an approach to worldbuilding which is detailed enough to feel real when people push against it but flexible enough to accommodate whatever you need to add to it when the players go off map. I found that a similar approach was very helpful when working on the books.

Gene Wolfe famously defined a distinction between a series and a multi-volume novel. A multi-volume novel, in his reckoning, is a single story told across several books with a definite and planned beginning and end. A series, by contrast, is an open-ended set of stories which may have elements in common, but which ultimately stand alone and can, in theory, last indefinitely. The Kate Kane books most definitely fall into the latter category. I am, in essence, making the whole thing up as I go along.

Of course the problem with making things up as you go along is that it’s very easy to wind up with a giant mess, and this is where I feel a background in tabletop gaming is surprisingly useful. The world of the Kate Kane series is constructed much like I would construct a setting for a tabletop RPG – a relatively detailed set of notes outlining the principles by which the world operates, who the major players are, and how things interact with each other but no specific ideas about what is actually going to happen. The key is to create a framework in which you can make stuff up as you need it while still having it fit in with everything that’s already there.

To put it another way, the world of Kate Kane was always designed as a kitchen sink setting, with vampires, werewolves, faeries, mages and other, weirder things all mixed up together. One implication of this is that I am not sure myself exactly what sorts of things actually exist in the universe. Are there dragons? Unicorns? Gods of antiquity? Maybe (actually, thinking about it, there are definitely unicorns). But while I don’t really know if any of these things exist, I do have a pretty good idea of how they would work if they did.

The Vampire: the Requiem scene is my tribute to the hobby that taught me to know how worlds work.

Alexis Hall was born in the early 1980s and still thinks the twenty-first century is the future. To this day, he feels cheated that he lived through a fin de siècle but inexplicably failed to drink a single glass of absinthe, dance with a single courtesan, or stay in a single garret. He can neither cook nor sing, but he can handle a seventeenth century smallsword, punts from the proper end, and knows how to hotwire a car. He lives in southeast England, with no cats and no children, and fully intends to keep it that way.

Second rule in this line of business: be careful who you kill.

My name’s Kate Kane. And right now, I don’t know which is more dangerous: my job, or my girlfriend. My job makes me the go-to girl for every supernatural mystery in London. My girlfriend’s an eight-hundred-year-old vampire prince. Honestly, I think it’s probably a tie.

A few weeks ago, I was hired for a simple missing person case. Next thing I know, I’m being arrested for murder, a vampire army is tearing up London, and even my dreams are out to get me. Something ancient, evil, and scary as hell is on the loose and looking for payback. The vampires are in chaos, the werewolves are culling everything, and the Witch Queen can’t protect everyone.

Which means it’s down to me. And all I’ve got to hold back the shadows is a stiff drink, a quirky sidekick, my creepy ex-boyfriend, and the woman who left me for a tech startup. It’s going to be another interesting day.

You can read an excerpt and, y’know, cough, buy the book, if you want, at Riptide Publishing.

Anybody who appreciates good coffee as much as I do is welcome here anytime. *grin*

Thanks for stopping by, Alexis. I can’t wait to check out Shadows & Dreams. It looks like my kind of story.

I appreciate all the caffeine 🙂

Thank you so much for hosting me. Hope you enjoy the book 🙂