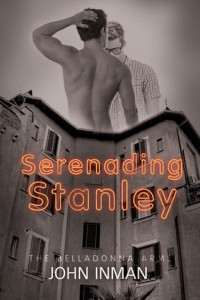 Stanley Sternbaum is twenty-two and moving out of his family home for the first time ever.  He wants to move close to his university where he will be working to get his master’s degree in archaeology. Until now, it’s just been Stanley and his mother.  His mother lives in town but Stanley is eager to get away and once you are introduced to Stanley’s mother, you will understand why.

Stanley decides to check out The Belladonna Arms, a rundown apartment building close to his college campus. Below the vacancy sign is another one written in magenta Magic Marker and sprinkled liberally with glitter that says “TO APPLY PLEASE BE CUTE”.  The Belladonna Arms is a residence for gay people, which means it’s right up Stanley’s alley.

It was the gayest, gaudiest collection of curtains Stanley had ever seen in his life. And on this white-hot August morning, those curtains hung limp in their open windows like so many varicolored tongues panting for a breath of fresh air.

Granted, Stanley is much too shy to be involved in any type of relationship but being gay, he’s eager to live in a building with other gay people.

In order to understand Stanley’s story, you must first be introduced to the cast of characters.

Stanley is brutally shy and unsure of himself. His mother (who I will come back to) made sure he grew up knowing that he was not worthy. He earns the nick name of Little Mouse by Roger as a result of his shyness.

Roger Jane – Roger is physical perfection. He lives on the 5th floor. Everyone in the building wants him or fantasizes about him. “Roger’s a dreamboat. God, wait’ll you see him. He’s a nurse. Everyone wants Roger, but he’s a little above the rest of us. Gods don’t usually canoodle with the mortals you know. They just don’t.”

Arthur – Arthur is the building manager of Belladonna Arms. He’s an overweight drag queen with a massive amount of body hair and a thing for taffeta. He is also one of the funniest characters I’ve ever seen in a book. “I’ve been dieting for almost a year now, and I’ve lost two pounds. Two pounds! I’m so thrilled about that.” Arthur also (as a result of his weight) has health issues and this is very evident when he tries to show Stanley the rental apartment on the 6th floor. Arthur bore a striking resemblance to a grounded cruise ship.

ChiChi– The resident  masseuse, who becomes Stanley’s next door neighbor. He has a thing for leather and can be seen – often – tweaking his nipples when he’s around Stanley. “Why was ChiChi wearing a leather bandolier? Was he a hooker? A Dom? A Columbian rebel?”

Sylvia – Sylvia is a transsexual and is working toward getting her final reassignment surgery. “…. Sylvia is having a bit of a slowdown on her reassignment surgery due to lack of funds, although her hormone supplements have swelled her breasts up nicely.  Perky little buggers. You’ll see. She’ll probably show them to you the moment you meet.  She loves showing them off. Sylvia is one of the reasons for the Belladonna Ball this year. We’re raffling off a trick for the night to help with her expenses.”

“Poor Sylvia. It must be hard.”

“If she gets the money together for that final round of surgery, it won’t be hard for long…”

Mr. (Pete) Ingersol – The only straight man in the building.  “Straight Mr. Ingersol. On 3. Shiver! But he was here before I moved in, so I can’t just toss him out on his sneaky little ass, now can I? Would but that I could!”

Stanley’s mother, Lola Francesca Sternbaum – Two weeks with Stanley’s mother could make the Valentine’s Day Massacre seem like a skeet shoot. The sinking of the Titanic a mere act of baptism for fifteen hundred people. A flesh-gobbling case of leprosy little more than diaper rash.  I absolutely loved Stanley’s mother, though she is as nutty as a bad fruitcake.

Stanley and Arthur make their way up the six flights of stairs so Stanley can see the apartment he hopes to rent. After a health scare with Arthur, Stanley meets Roger Jane for the very first time. Oh what a vision of perfection Roger is! Stanley is immediately attracted to Roger but he knows his place. No one would ever want boring Stanley. This begins the story of Serenading Stanley.

Once Stanley moves into the building, he does everything he can to avoid Roger. This is difficult to do because everyone in the building is busy pushing Roger’s perfection on him. Stanley is no fool. No one, especially someone as wonderful as Roger, would ever want someone like Stanley. Why settle for hamburger when you can just as easily partake of steak on a regular basis? Apparently Roger has other ideas. He makes it known that he is definitely interested in Stanley. Unfortunately, Stanley’s self-esteem is at an all-time low and nothing Roger does can convince him that he is really wanted by the hottest man Stanley has ever seen.

Roger pursues Stanley and it takes a lot to get Stanley to see that maybe he might just be worthy after all. There are other love stories going on at Belladonna Arms as well, but I won’t give them away.

John Inman outdid himself with the characters in this book. Every single one of them had me laughing out loud at some point. Arthur is a keeper and I don’t think I’ll be forgetting him anytime soon. Stanley’s mother is the ultimate psycho. The entire time I was reading about her (and laughing my head off) I was thinking how similar she is to my own mother. Remove the Marlboros (she’s a chain-smoker) and alcohol, and there you go. 🙂

All is not funny though. Stanley has deep-rooted issues that he must come to terms with before he can have any type of relationship with anyone, much less someone like Roger. My heart broke a little for him as I watched him knock himself down time and again.  I adored Roger instantly. Sure, he’s perfect physically but all he wants is to find someone to love him for who he is on the inside, not the out.

This is one of those books where you wonder where the title came from until finally there is an “A ha!” moment. It made perfect sense and I have to say that Serenading Stanley is titled perfectly.

Overall, I absolutely loved this book. It’s pretty common knowledge that I am a huge fan of this author so I am always happy when a new release measures up (to me) to his others. Serenading Stanley definitely did.  If you are interested in a sweet love story and quite a bit of humor, I highly recommend this book. Be prepared to laugh out loud a lot. I did.

You can read more about John Inman and his books here.

Great interview, Cindi! I can’t wait to read this one. 🙂

Thanks, Trisha. You’ll love Serenading Stanley. Sweet love story but you will laugh a lot. 🙂

Cool, glad to hear it. I always love a good laugh. 😀

Thanks for the great review, Cindi. I appreciate it.

You’re welcome, John. Thank you for another great story. 🙂

This is definitely a Cindi read – humour and some more humour with that touch of the ‘human condition’ in there. Terrific review, I totally got the characters 🙂

Thanks! I absolutely loved it. Every single character was important to the story and I loved every one. Yes, it is definitely a Cindi read. You know my love for humor. 🙂