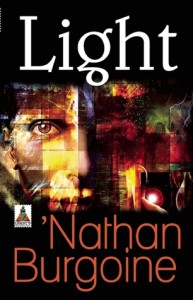 Blurb: Kieran Quinn is a bit telepathic, a little psychokinetic, and very gay—three things that have gotten him through life perfectly well so far—but when self-styled prophet Wyatt Jackson arrives during Pride Week, things take a violent turn.

Kieran’s powers are somewhat underwhelming but do have a habit of refracting light into spectacular rainbows for him to hide behind. Even so, it’s not long before Kieran is struggling to maintain his own anonymity while battling wits with a handsome cop, getting some flirting in with a hunky leather man, saving some drag queens, and escaping the worst blind date in history. It’s enough to make a fledgling hero want to give up before he even begins.

One thing’s for sure: saving the day has never been so fabulous.

I don’t normally put blurbs in my reviews but I felt that it was warranted in this case as it really describes parts of the book much better than I could in my review.

Kieran discovered that he was different when he was ten. His mother was dying and young Kieran was in the hospital bed with her watching a program on TV where Thomas Wright: Psychokinetic was going to be the first person ever to demonstrate his abilities publicly, on national television.  Only the demonstration doesn’t quite go as planned.

Years later, Kieran is a masseuse at Now & Zen. Each year he takes Pride Week off feeling happy to have been born the gay child.  He plans to go to as many events during Pride Week as he can but first he has to get through one of the worst blind dates in history, courtesy of his best friend Karen. Karen can’t understand why in the world Kieran is still single. She is too but that is so not the point. The dud of a blind date turns into Kieran being forced to allow the guy to go with him to the Pride flag raising ceremony at City Hall. While there, they see Wyatt Jackson, a preacher (similar to Westboro Baptist Church, as I’m sure was the point) and his cronies trying their damndest to disrupt the ceremony. When it turns violent is when Kieran has to step in and use his own telekinetic powers to stop the violence. He must do this without anyone seeing him as his abilities are a closely guarded secret that he has shared with no one, including his father, brother or Karen.

When it is all said and done there are injured people everywhere. When Kieran could run away (like his date did) instead he stays behind and helps an injured man who is bleeding badly from his arm. When the man is rushed to the hospital Kieran figures he’ll never see him again. Thankfully he’s wrong about that.

The so-called preacher and his misguided followers make appearances (and cause violence) at various events during the week. Kieran does what he can to stop it but has problems doing so because he believes that the preacher may have the same powers as he, only stronger. The man he helped, Sebastian LaRoche, plays a big part in Kieran’s life later and ultimately becomes more than just some random stranger whose arm he bandaged.

Light has a great set of characters, from Kieran and Sebastian to Karen and the blind date. Karen is a total blast. I read so many books with the token bitch female so it was refreshing to read one with a great character like Karen. There is Kieran’s brother, who is not in the book much but when he is, you gotta love him. Kieran is adorable. He has accepted his powers and is trying to use them to rid Pride Week of the bigoted pastor and his minions. Sebastian, I totally fell in love with from the moment he was lying on the ground with blood running down his arm.  Throw in a few entertaining drag queens, a funny cat, and a very excited dog and you simply can not go wrong with the characters in this book.

Overall, this is an outstanding book. There’s a bit of violence, a bit of romance, and several out there situations.  I laughed a few times and I cringed once or twice. But in the end, I was very happy that I read this book. There is a lot more I could add to my review as a lot happens in the story. However, I will just say read it. You won’t be sorry.

This sounds really unique and interesting. Loved the review and I have one question – What is it about you and books with dogs in them? 😛

I know, right? For some reason I always get books with dogs in them. The funny thing is that I’m not that much of a dog person. Normally there are kids in those books. None in this one. 🙂 It was a really cute story. It made me want to go back and read all the author’s shorts put out before it.

Great review. This sounds like a really fun premise. Different. Off to order it right now.

Thanks, John. It’s a really fun book. I hope you enjoy it.

Thank you so much for such a lovely review! You made my day.

You’re very welcome, Nathan. It is a great book. 🙂