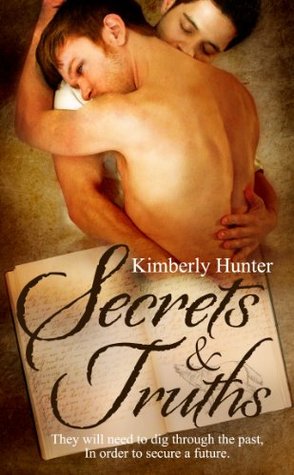 Purchase At:  amazon.com, ARe

Caleb Lamont (Addison) is twenty seven and human. He has been raised by his grandparents who are part of a family that have a long history in an organisation called the Knights of the Light. The KotL were formed over a thousand years ago to keep the paranormal world in check and to make sure the majority of humans were kept a bit more in the dark about paranormal activity. But the Knights became political and power hungry and turned on the vampires and werewolves who they considered had power and wealth they coveted. Caleb’s grandparents left the group and started up a unit to help any paranormal being targeted by the Knights. Caleb and his grandparents now run The Guard who are involved in fighting the Knights and any rogue paranormals –

Nearly nine years later, my family and I have made The Guard into an elite fighting force worthy of any military branch, even exceeding some. It’s definitely been needed. Despite the treaty, there are still pockets of resistance. Human groups making their own laws because of fear and ignorance. And since it’s been discovered someone in the human government is outfitting these groups, well, it looks like they need to be reminded of what happened to the Knights.

Caleb has a team around him he trusts, including a bird, panther and wolf shifters and a human. On one mission Caleb is critically wounded and the decision is made to turn him into a wolf shifter. Not everyone survives but not only does he survive, he becomes incredibly powerful. His team and his grandparents decide that keeping Caleb under wraps for a while is not a bad thing.

Jett Valen is an Alpha Prime of the Southeast. His brother, Dean, works with Caleb. Jett and his grandfather also work closely and are invited to the Guard’s HQ to meet Caleb.

“Well that’s what happens when your wolf shifts into the size of a Clydesdale. Jesus.”

What occurs at the meeting is a lot. Both Jett and his grandfather have to submit and when you have Alpha Primes submitting it is not always expected to go well. But there is more, Jett is Caleb’s mate, and to add to that, it seems Caleb is the most powerful of all wolf shifters, the Regem Lupus or Wolf King.

Caleb and Jett get off to a rocky start, but it seems that there are a lot of 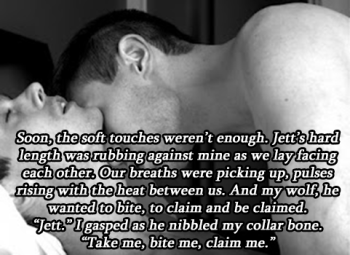 coincidences in their lives that parallel journals that Jett’s great grandfather sourced and his grandfather became the keeper of. The coincidences include the team that he has around him, right down to the number and type of team members. Also, that Caleb and Jett appear to be the Regem Lupus and the Regem’s consort. Not only that, each Regem Lupus and consort throughout history have had the same first initials – C and J.

“Tell me young Caleb, in your Pack, have you claimed an Alpha, a Beta, an Omega, a Gamma, and a regular wolf?”

There are a lot of changes that occur with the change to powerful were and Regem Lupus for Caleb – he can speak telepathically and he can take over other pack members without the normally mandatory blood bond.

“He did it, Em.” His eyes were wide, tone now reverent. “He claimed me. And without a blood bond. It’s…it’s so warm, Em. My wolf has never felt so at peace. So cared for.”

He can also see the golden vine of a mating bond or the discolouration of an ordinary bond.

Without giving the story away,  the book is about Caleb and Jett developing a stronger bond and changing. Plus, Caleb is hell bent on changing archaic shifter laws. There are elders on the Council who are corrupt and planning on warring with those who oppose them and their lack of altruism for the pack. Nikolai and Dimitri Ivanoff, and some other shifters closer to home, are the primary instigators of an upcoming war if left to their own devices. They care nothing about the ordinary pack member, family, or who they hurt along the way. Both Caleb and Jett have to work with King Leo, the vampire leader, who has traditionally had a good relationship with both families. Will that continue? Will he share a blood alliance with them?

Secrets & Truths is told from both MC’s POV, which gives you clear developments via Caleb and Jett. The best way I can describe Secrets & Truths is a down-home, paranormal read. It does have a lot going on in the pages. And quite a few characters. But as with a Kimberly Hunter book, there is a warmth, a theme of ‘family is who you choose.’ The good guys and the bad guys are very clearly delineated…and the good guys win. There is also a very welcome HEA. If you read to escape and to see the bad guys get what’s coming and a sweet MM romance build, then Secrets & Truths is a good book to while away your reading hours.

“Pack is family.” I gave him a warm smile. “We take care of family.”

I love how this is told from both MC’s POV. I like knowing what’s going on in the heads of both main characters. I enjoy a good shifter story and you know how I am when it comes to family – whether they are by blood or no.

Great review, and I love the photo and quotes.

Yes, different POV’s I do like. I also like a paranormal shifter…although vampires remain my first love.
🙂

Yes, family is who you make it and Kimberly Hunter is big on that in her books.

Oh, and isn’t that cover lovely?

This is the new quote system in blue. Yay change….

I love the cover. I meant to mention that as well.

The quotes look really good with the new quote system. I will be trying to learn it later. Yay change…… is right.

Go, us. We are fabulous with change, lol.

This sound really nice and sweet to me. I do like to have a HEA. Another book to add to my list.